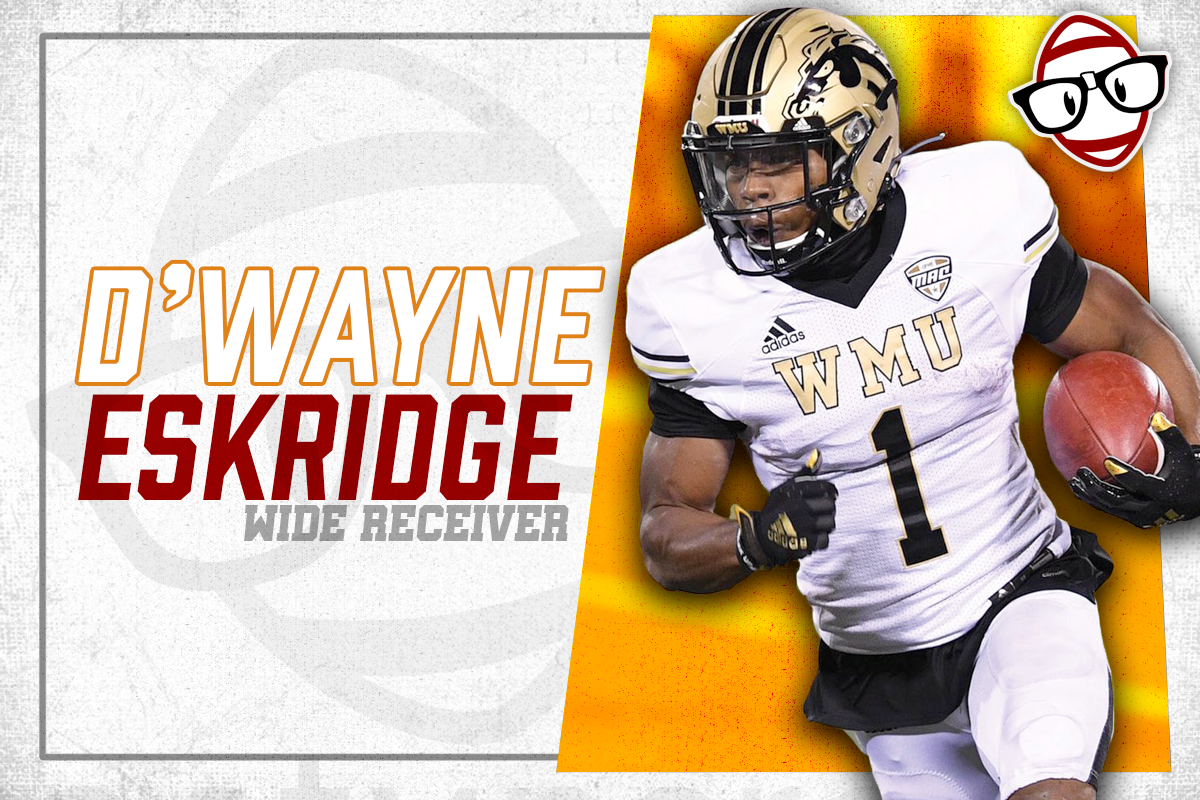 Perhaps the biggest riser over the past few months, D’Wayne Eskridge has shot up draft boards as his name reaches mainstream draft media after a great Senior Bowl week. The electric playmaking wide receiver from Western Michigan is an older prospect at age 24 but has enticing intangibles, which could translate to NFL success.

Eskridge was a three-star receiver in the class of 2016 and played high school ball in Bluffton, Indiana. He only received offers from Ball State and Western Michigan, ultimately choosing to head to Kalamazoo and be a Bronco.

The first thing which pops out in the stats is the lack of production. As electric and dangerous as he is, Eskridge didn’t have any huge seasons and only had 133 offensive touches over five seasons. Granted, the offense after P.J. Fleck hasn’t been the most prolific, but you expect to see big numbers with the talent he has displayed.

He began his collegiate journey at cornerback, with 2019 being his most productive season. Eskridge had 14 tackles, and four passes defended. Talk about versatility!

The level of competition, playing in the MAC, will always be one of the biggest question marks and he helped answer it at the Senior Bowl week a few weeks ago.

ESPN analyst Todd McShay said that he wouldn’t be surprised if Western Michigan WR D’Wayne Eskridge was drafted in the 1st Round of the NFL Draft after the #SeniorBowl. Here’s every 1-on-1 rep from the practices: https://t.co/H8Tr6lxbF1 pic.twitter.com/Q604e2l5rK

Eskridge was embarrassing defensive backs all week and earned praise from ESPN’s Todd McShay as well. It was a strong week for him and he showcased what he can do against better corners.

Everything Eskridge does is with speed, quickness, and he is incredibly sudden. He can stop on a dime and recover quickly if engaged. There is tenacity in his game – he loves to block and never takes a play off. He is one of the most fun players to watch I have ever scouted.

Some detractors point to the level of competition as a reason his speed played so well in college. Eskridge has been clocked at 4.33 in the 40-yard dash, albeit it was an unofficial time. Watching him in the open field, he plays with speed, and I doubt he would test much differently officially.

Against Akron in this clip, Eskridge uses a quick move off the line to get under the corner. It’s a simple, quick pass, and he does the rest, weaving through the middle of the defense and turning on the speed. The speed is effortless, and it doesn’t even look like he’s trying.

This play was a big highlight of the year for Eskridge. He torched Central Michigan – here he stops on a dime in a hole, and the QB hits him in the chest. He spins to elude the oncoming safety and outruns half of the town of Mount Pleasant for six points.

Eskridge is so dangerous on even a simple screen, as shown in this play. He eludes the first defender and explodes, creating a lane with speed to split three defenders before being caught fifty yards downfield.

Separation Off The Line

Defenders need to respect the speed and it allows Eskridge to employ a variety of moves off the line to create separation.

Playing tight defense allows the corner to get your hands on a wide receiver, but Eskridge is so slippery. Here he takes his first step outside and when the corner leans in that direction, it’s over. He quickly plants and fires inside where the quarterback hits him for an easy score.

In this clip, the corner tries to get his hand up to possibly jam or throw Eskridge off the route. He counters with a hand slap and then explodes off the line, getting open to the inside for an easy reception.

The corner engages Eskridge here, taking the wideout outside, and it looks like the corner is hanging with him in decent coverage. Eskridge slams on the brakes, and the corner is helpless. Nasty move, and one has to feel a little sorry trying to play defensive back versus him.

Eskridge has surprisingly strong hands and doesn’t drop many passes. He catches away from his body and routinely outmuscles defenders much larger than him.

Here, Eskridge has a tight window against the sideline where the QB finds him. He maintains body control while tracking the ball, twisting to make a strong catch for another big gain.

Western Michigan didn’t have the best QBs and this is a heave in the general direction of their star WR. Eskridge adjusts to the ball and is able to get the catch despite all the traffic. It did get into his body, catching it in the breadbasket, but it didn’t seem like he had much choice.

A team can use Eskridge in so many ways, and he will get on the field. He should be a returner from day one, and he is so dangerous in that role, as shown below. But he can be used in gadget plays, taking reverses or quick screens; due to his speed, he will get the attention of defenses. And he can also fill in at cornerback in emergency situations or toward the end of games in hail mary situations where teams employ eight defensive backs.

Eskridge played on the boundary mostly in college, but his size will likely relegate him in the slot when he reaches the NFL.  Putting him in the slot isn’t writing him off by any means, but it does cap him from a production standpoint.

I love his intelligence and how he manipulated defensive backs at Western Michigan, but I can’t see the skill being as successful in the NFL. The corners are obviously much better and can recover against some of his initial moves better.

Eskridge wasn’t shy to get physical but doing it against NFL corners versus MAC corners is a huge difference. He fights hard away from plays and loves to block, and it may get him knocked around a bit at the next level.

At age 24, Eskridge is an old prospect considering Jerry Jeudy, Tee Higgins, CeeDee Lamb, Justin Jefferson, and Jalen Reagor were all 21 years old last season. Is it a death sentence? Absolutely not, but something teams will consider when slotting Eskridge on their draft boards.

The first round talk seems overly ambitious – I think the third round is the sweet spot. The age, competition level, and lack of production are obvious detractions. Speed and the ability to create will get him selected on the second day.

As far as fantasy is concerned, with the depth of the class at WR, Eskridge is likely to be a late second-round pick at the earliest. I would be more comfortable selecting him in the third round; he has upside but more question marks than many other players at his position.

I spent a lot of time on Western Michigan’s campus during my college years with several friends attending, and Eskridge is a player I am pulling for to succeed. When watching him over the past year, I have really fallen in love with his game and the way he plays.

A smaller guy with speed who plays with such passion – I am hopeful but apprehensive in evaluation. I believe he will be a productive player in the NFL but will not be an elite player or consistent fantasy asset. The learning curve will be challenging, and already aged 24, Eskridge may be 27 before we know what he is fully capable of.

Thank you for reading this article! Please be sure to join the #Nerdherd so you don’t miss out on any of the amazing things we have to offer Dynastynerds.com. You will get rankings, extra podcasts, and access to our rookie film room. For just a couple bucks more you can get access to our revolutionary DynastyGM tool. So much for so little, why miss out on all the fun? Follow me @FFPeeblesChamp for more devy and dynasty content!