Elijah Mitchell might be the best RB in the 2021 class that you’ve never heard of. @tristancook_ breaks down Mitchell’s 2021 profile! 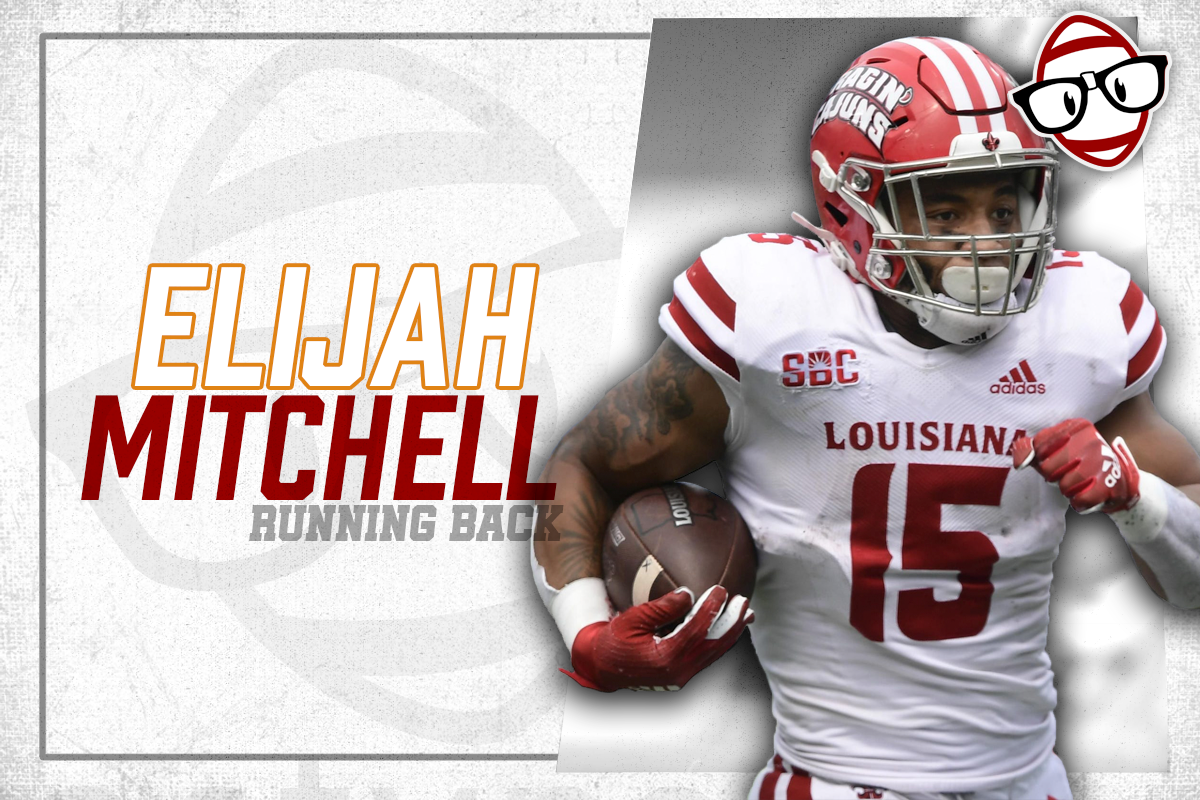 Elijah Mitchell is a former 2-star WR recruit from the state of Louisiana and who became a dynamic rusher for the Ragin’ Cajuns’ football team. Mitchell converted to RB for Louisiana-Lafayette and has blossomed there.

Mitchell, who has come a long way from being the 2993rd overall recruit in the 2017 class, is now on the verge of making it to the NFL. During his tenure with the Ragin’ Cajuns, Mitchell split backfield duties with fellow NFL hopeful Trey Ragas and 2020 Tampa Bay Buccaneers draft pick Raymond Calais.

After an unspectacular freshman season, Mitchell put up a solid stat line in his sophomore season, trailing the aforementioned Trey Ragas for the team lead. He doubled down on his strong sophomore campaign by rushing for a team leading 1147 yards and 16 TDs in 2019. Despite the COVID shortened 2020 season, Mitchell still managed nearly 900 yards rushing in only 10 games.

I watched Mitchell’s games from 2018, 2019 and 2020. Notably, I watched his 2020 performance against #23 Iowa State as well as his 2018 game against #1 Alabama to see how he stacked up against higher tier opponents. I once again used the Dynasty Nerds Film Room as well as YouTube as my source for game tape. Louisiana-Lafayette film is a little tough to get, but thankfully it’s out there if you look hard enough.

Without a doubt, the biggest strength that I saw for Elijah Mitchell on tape was his contact balance. He absorbs contact very well, and routinely stays on his feet after being hit. Moreover, he rarely goes down to the first defender. His ability to bounce off defenders was on display time and time again.

He also showed that he can make defenders miss in the hole with his quick feet, while still being able to get the tough yards when needed. Finally, he showed natural receiving ability and soft hands in his limited use as a receiver.

There are two concerns I have about Elijah Mitchell’s game. First, and foremost, is his speed. I am unsure his top-end speed will lead him to break away from defenders at the NFL level. He could have trouble getting to the edge and around defenses. We will see if he runs during his pro day, but I don’t expect his 40 time to be particularly fast. He is more ‘quick’ than ‘fast’.

The other concern I have is with his pass protection. It’s not the biggest issue, because many RBs face this coming into the NFL. It certainly wasn’t a strong suit of his.

I’ll be interested to see how the NFL views Elijah Mitchell. I expect him to go early on day 3 of the NFL draft, with the potential to sneak into day 2 if he impresses during the pre-draft process. However, despite being a late-round RB, I think he could be an effective runner at the next level. I see him being a value pick later in rookie drafts if he lands in a good spot. I’ll likely be targeting him with my later round picks.