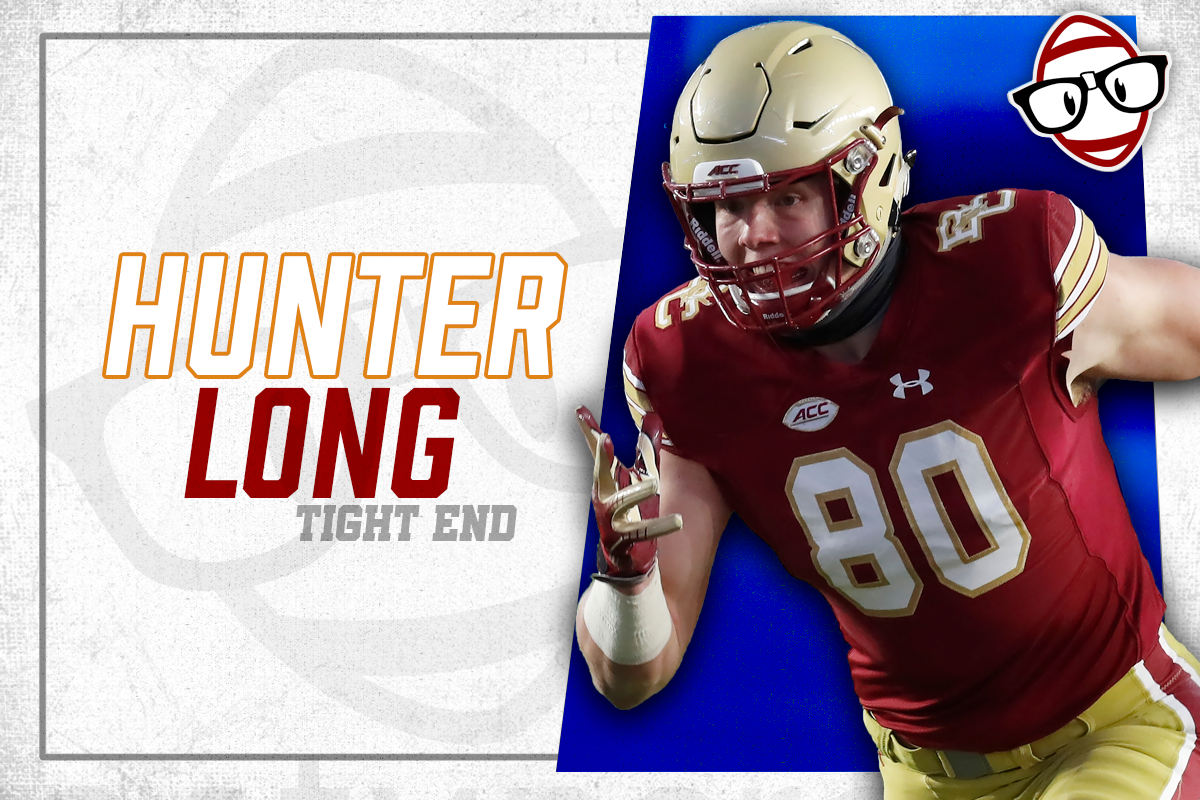 Hunter Long hails from the thinly populated state of New Hampshire, where he was a two-way starter for Exeter High School. Very tall but lean, Long did a postgraduate year at Deerfield Academy and gained 15 pounds of muscle. Long was not heavily recruited, with only 247sports.com ranking him above a 2-star recruit. He signed with Boston College despite the low ranking. Thought of as a project, Long walked into college with no hype and buried on the depth chart his freshman season.

Long redshirted his freshman season in 2017 and took the time to get bigger and stronger for the college game. He appeared in all 12 games in 2018 but only had four receptions. Two of those receptions went for touchdowns, and Long took the momentum into the 2019 season. Long averaged 18 yards per catch in 2019, which is unheard of for his position. In 2020 he was on everyone’s list for the Mackey Award in the pre-season, and he did not disappoint. He led Boston College in receptions and finished the season 1st team All ACC.

Hunter Long instantly pops off on tape because of his height and elite wingspan of 83 inches. He moves well for a player of his size and understands how to dictate defenders to get open against multiple coverages.

He was used in several different positions to utilize his skillset and even lined up out wide along with the slot. Long showed great footwork while creating separation against linebackers and even defensive backs. After the catch, Long shows surprising speed and agility to make big plays consistently. Long was not used too much as an inline blocker but was more than willing and when needed.

Long is limited physically and will not remind anyone of a Darren Waller or Evan Engram in the forty-yard dash. Lateral quickness is not a strength as he moves much better in a straight line than side to side. Long will not be able to outrun most linebackers at the next level as he did at Boston College. When matched against smaller defenders, Long often showed a lack of aggressiveness instead of dominating the weaker defenders. He can improve on blocking technique and finishing the play through the whistle. He had far too many dropped balls, and he will have to improve on that the moment he steps in the NFL.

Long’s greatest strength is winning jump ball situations, much like Jimmy Graham, because of his elite size and wingspan. Long can move well, but he’s not quite the same athlete Graham was in his prime. Hunter Henry’s athletic profile is very close to Long in terms of speed and quickness. Combine Jimmy Graham and Hunter Henry into a player, and that will accurately describe Hunter Long.

Long is currently my 4th ranked Tight End in a very talented 2021 draft class. Long grades out very well and would have been my TE1 in the 2020 class ahead of Cole Kmet and others. I expect Long to be drafted on day two of the NFL Draft and instantly become a red-zone target. In Dynasty rookie drafts, Long will be the perfect dart to throw later in the draft as I expect him to develop into a fantasy asset.