Is Ian Book talented enough to be on a roster in 2020? 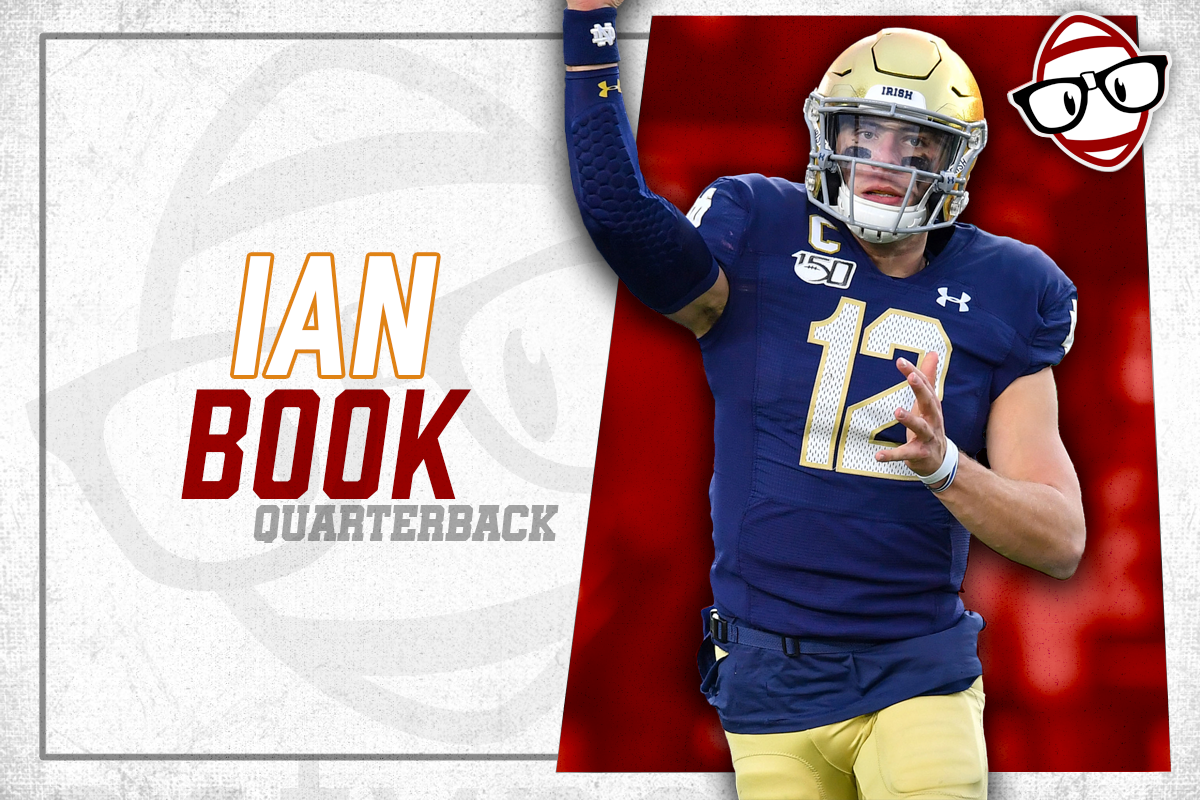 Man, oh man, where do I begin with Ian Book? He is a four-year starter out of Notre Dame, and he closed out his career second in most of the statistical categories at the school (behind only Brady Quinn). Book is the type of guy whose tape is ugly, but the team rallies around him to win football games.

I watched plenty of Ian Book over the last couple of years, and in some of my more recent rewatches, my opinion on him hasn’t changed much.

Smart with the Football

One of the biggest strengths in Book’s game has been the lack of turning over the football. Over the last three seasons, he has 16 interceptions which equates to one in every sixty-six pass attempts, which is quite impressive.

Book’s rushing total in 2020 was more than his first three years combined. Between designed runs and breakdown in coverage, I was impressed with Book’s ability to extend drives with his legs.

I swear to you I didn’t make that ending slow-mo because it sure looks like it. Book is what they like to call a ‘gamer,’ or I like to call scrappy. You often see him praised for this, and rightfully so, but that alone won’t change the perception of his weaknesses.

Book struggles to beat teams with the deep ball, and I believe that hindered the Fighting Irish’s ability to win the big games against Clemson and Alabama. He already lacks in size, so not beating a team with his arm by stretching the field showed repeatedly.

Book struggled in games in which the final margin was one score or less. He threw 13 touchdowns but accounted for eight interceptions in those games. They went 10-0 during the regular season, and when it came to the conference title game against Clemson, he struggled. He followed it up with a rough outing against Alabama in the college playoff game. Book never showed the ‘IT’ factor to prove to anyone that he is anything more than a good college quarterback.

Talent Around Him Made Him Look Good

If you watch the tape, you’ll see errant throws caught by his playmaking receivers, whether it was deep down the field or even in the red zone. It blew my mind how often the likes of Cole Kmet, Chase Claypool, Michael Mayer, and a host of others would turn his trash into treasure. The talent around him lifted him to be a lot better on the stat sheet than he was on the field.

Book had another opportunity for him to set himself apart, and he failed to do that. When I was watching him in practice, he refused to take any risk. He was errant with his throws, checked down a lot, and even underthrew several deep balls.

Who Could Forget This?

Book misfired, which led to an overthrow that broke the nose of a cheerleader.

Final Thoughts: Book had plenty of opportunities to ‘wow’ us over the last four years and didn’t do that. I don’t foresee anyway I would draft him if I was a general manager. I would let some other team take that ‘chance’ and draft someone that could one day produce for my team.

Draft Round: 7th round-undrafted. I don’t see a scenario where he goes any higher than the 7th round. He isn’t amongst the top-tier or even in the middle-tier. It might be fitting for him to find a spot in the upcoming reboot of the XFL.

Contribute: He has zero fantasy value.

Potential Landing Spots:  Chiefs? Raiders? I am not sure he gets drafted to even mention a landing spot.