Ihmir Smith-Marsette is an explosive playmaker. @TheHQNerd dives in on the Iowa WR and his dynasty prospects. 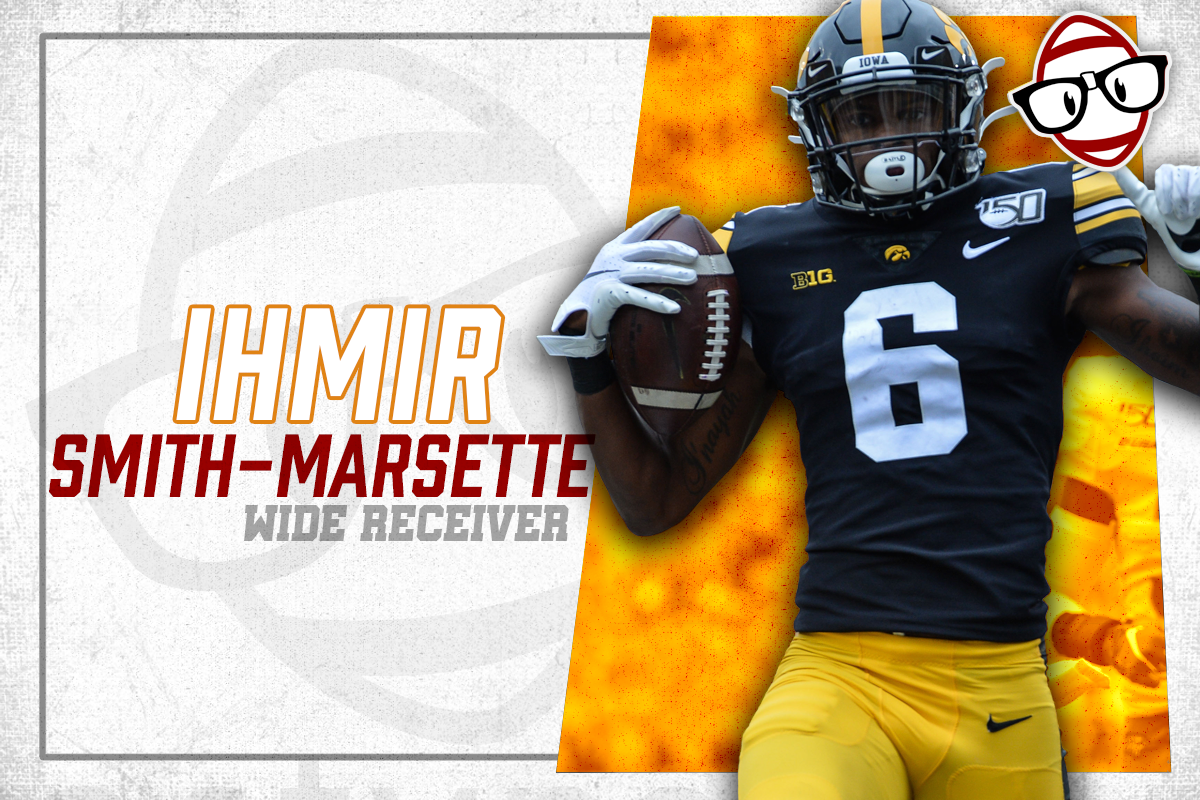 After a relatively light and, at times, strange recruitment process, three-star prospect Ihmir Smith-Marsette chose to play football at Iowa. His freshman year Smith-Marsette was able to get on the field and make some plays right away. He gradually kept increasing his production through his sophomore campaign. However, it was his junior year where Smith-Marsette broke out and flashed what kind of a dynamic playmaker he is.

In 2019, Smith-Marsette garnered career highs in receptions (44), Receiving yards (722), and total touchdowns (8). He added 108 yards rushing as well, showing off his diversity. Ihmir finished his senior season at Iowa with 25 receptions for 345 yards and 5 total touchdowns from scrimmage in a shortened seven-game season. It’s worth noting Smith-Marsette was also one of the most electric kickoff return specialists during his career at Iowa. He averaged a whopping 28.2 yards per return and totaled two career touchdowns. Concerns rose his senior season when Smith-Marsette was arrested for driving under the influence while speeding, resulting in a one-game suspension. Ihmir-Smith Marsette didn’t come into Iowa highly touted; there were some ups and downs on and off the field. Overall, Smith-Marsette leaves Iowa as a player who was able to improve and have a solid college career.

When talking about Ihmir Smith-Marsette, you have to start with versatility. He’s an exciting playmaker on all three levels. During his career at Iowa, Smith-Marsette was gradually used In multiple ways on the field. Whether it be as a kick returner, working in the slot or on the outside, manufactured screens, or designed sweeps off the edge, Smith-Marsette showed he could excel in a variety of different ways. Iowa tried involving Ihmir more and more on the first level with manufactured touches at the line of scrimmage. Get the ball in Smith-Marsette’s hands, and good things can happen.

Next up is speed and Ihmir Smith-Marsette displays a lot of it. His greatest play strength may be his ability to get a step on defenders and consistently get behind a secondary. He’s not the biggest in terms of size, so using his speed is a crucial part of Smith-Marsette’s game. Here in the Dynasty Nerds film room, we see Smith-Marsette get early leverage on the cornerback, but it’s mainly his overall speed that gets him the win.

Smith-Marsette can win off the line with a variety of release packages. He shows solid footwork, which helps him create separation on defenders. This is a nifty little move here. The initial first step and body manipulation freeze the defender’s hips right off the jump, giving Smith-Marsette the separation needed. Once again, winning with speed for the easy touchdown.

Earlier I mentioned an off-the-field issue with Smith-Marsette. There are also some on-the-field concerns when watching the former Hawkeye play. Being only 180 pounds, Smith-Marsette is a little undersized in his frame. He can struggle at times when jammed on the line. Facing man press coverage, there are times where Smith-Marsette can be easily knocked off his route.

Smith-Marsette is excellent at the line of scrimmage and the deep third level of the field, making big plays. Where he struggles is in the second level of the field. The middle of the field often requires physicality. He has work to do there. Receivers with great hands usually excel in the slot. It would be nice to see Ihmir improve on that intermediate part of his game. Smith-Marsette battles consistency game to game. There are moments where he shows a lack of concentration and has the occasional drops. Ihmir Smith-Marsette isn’t the perfect prospect. The talent is there. It just may take a little time to develop.

Speed rules the day in the NFL right now, and Ihmir Smith-Marsette has that juice. His kick return skills will help him see the field early at the next level. He’s a little bit of a tweener on what position he will play out of in the NFL, whether it be on the outside or in the slot. Wherever he lands, his new team will be able to scheme touches for the dynamic receiver.

Smith-Marsette doesn’t project to be a target hog or a high-end fantasy contributor. I believe he could find a way to contribute with limited volume. With the right landing spot, there’s potential for more. I like him the most in Best Ball dynasty leagues. Smith-Marsette should go somewhere around the fourth round in standard Superflex dynasty rookie drafts this spring. With a bump in draft capital, there’s a shot his ADP rises a little more. I’m all about taking shots on guys who have a big playmaking ceiling in dynasty. If you’ve been stockpiling some late-round rookie flyers this year, Ihmir Smith-Marsette is a player that should be on your radar.

Get ready for your rookie draft with the DynastyGM!! Rankins, trade calculator, league analyzer, and much more. Just $2.99/month or better yet, bundle with the Nerd Herd for just $4.99/month and get extra podcasts, the Dynasty Prospect Film Room, and m