The 2017 number 1 overall ranked recruit has taken a long road to get to the 2021 NFL Draft. @FFPeeblesChamp gives the lowdown for the EDGE rushing beast from the U. 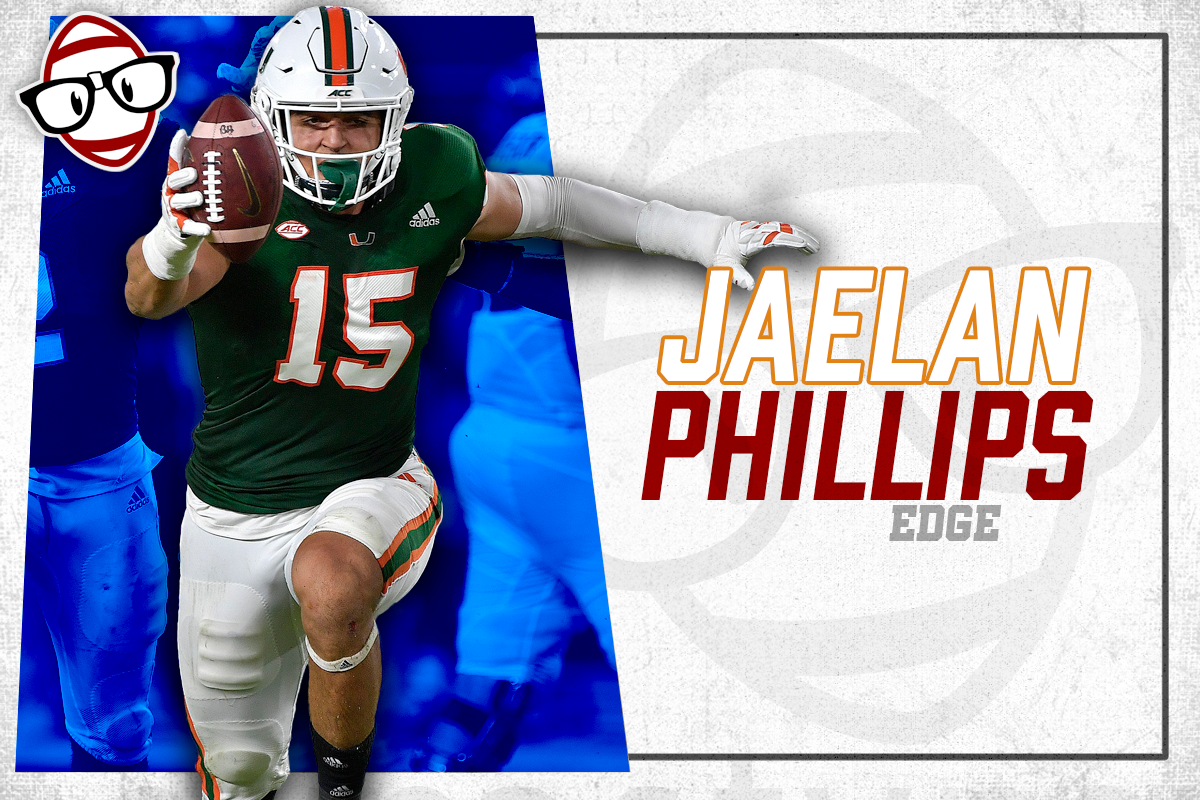 Jaelen Phillips has as many questions as he does tantalizing traits, but his traits make him one of the scariest defensive EDGE prospects in his class. He has taken an interesting path to get here, and he will see his name called early in the NFL and your IDP drafts.

Phillips was the overall number one rated prospect in the 2017 class. He played his high school ball at Redlands Valley, California, and had offers from many top schools. Alabama, Michigan, Oklahoma, amongst many others, had offers for Phillips, and he didn’t take any official visits before opting to stay close to home and attend UCLA.

Phillips’s first two seasons at UCLA were marred with injuries, and when he was on the field, he showcased flashes of his immense potential. After the end of the 2018 season, he medically retired due to mounting injuries.

Phillips left UCLA and transferred to Miami after his retirement, but it was still unclear if he would play for the Hurricanes. He sat out the 2019 season and opted to give playing football another try in 2020. Fellow Hurricanes star Gregory Rousseau opted out of the season, but Phillips was joined on the defensive line by transfer Quincy Roche to form one of the nastiest duos in college football.

Phillips played ten games and tallied 45 tackles, 15.5 tackles for a loss, eight sacks, and three passes defended. The 15.5 tackles for loss ranked fourth in the NCAA, and eight sacks ranked tenth. Both numbers were the second-best totals in the ACC.

At 6’5″ and 260 pounds, Phillips has the size and length to be an end, and he has phenomenal speed and strength. He converts the speed to strength in a hurry.  His wicked first step, coupled with acceleration, makes it seem like he is jumping the snap count many plays.

A quick first jump off the line gives Phillips a quick advantage in pass-rushing situations. It allows him to set up moves, and when he gets to the tackle quickly, it typically catches even the best tackles off guard and can set him up advantageously.

I didn’t see Phillips go inside often; he darts inside between the tackle and the guard on this play. He quickly swims by each and drops Trevor Lawrence for a loss.

Here we see the slight stutter to set the tackle up and then the burst past him, bending around the end to drop the QB for a loss. Hendon Hooker didn’t know what hit him; Phillips was in the backfield quick.

Not much to say on this play, other than a holy damn. In the first step, Phillips explodes off the line and bends quickly around the edge. After he is beyond the pocket, Trevor Lawrence takes off on a scramble. Phillips tracks Lawrence down, who is not a slow runner by any means, to catch him from behind and force the turnover. I could watch this play over and over; I love the motor and relentless speed.

Speed is obviously a great trait to have, but some linemen can’t get back on track once they’re derailed or engaged. That is definitely not the case with Phillips. If he is engaged, he turns on the power and can outmuscle offensive lineman much larger than he is.

The speed is the killer, but if a lineman squares him up, Phillips can flip the switch and get some push. Above is three plays I noticed in the Virginia Tech breakdown I did for the Devy Manual channel. They don’t end in sacks, but they help collapse the pocket and force hurried throws.

Being a pass rusher is where he will make his money, but he is not a liability in run defense. He uses his long arms to peel off of blocks and make tackles. Phillips has good discipline if he’s taken inside, smart enough to maintain his gap and not be taken out of running plays.

I would have liked to see Phillips wrap the running back up but this play showcases the run-stopping ability. He sifts through the line to hit the RB and slung him ten yards back. The cavalry cleans it up though and it still ends up in a big loss.

His discipline shows on plays like this; he quickly realizes it’s a reverse and makes a huge open-field tackle: another big loss and a demoralizing fourth-down stop.

Phillips has a significant injury history, including multiple concussions, and only played 962 snaps in four seasons. It is risky, and some teams could knock him off their draft boards entirely due to it.

Developing a few more moves could make him even more devastating. He resorts to a spin move occasionally, and it’s not the prettiest move. It slows him down and allows the lineman to gather Phillips in.

I would like to see him string together moves better also. Adding a few moves could allow him to counter and be a better rusher. Refining a spin move would make him even more dangerous. The speed and bend around the edge is borderline elite, but it won’t often win against the better tackles in the NFL.

If it weren’t for the injuries, Phillips would be in the discussion for a very early first-round selection. His physical traits are incredibly tantalizing. He is one of the fiercest pass rushers and was higher ranked in his class than Chase Young. Phillips will still hear his name called on day one; it’s hard to pass up a nasty pass-rushing talent.

As far as IDP, he should still be a first-round selection in your rookie draft as well. I would be comfortable taking him after the first couple linebackers and right amongst all the defensive ends in this class. In both of the mock drafts I have done, he was selected seventh. I think that’s the perfect spot for taking Phillips.

Phillips has the upside to be one of the best EDGE rushers in the class. Despite the injury history, what we have seen in limited tape makes him such an enticing prospect. He’s going to go early, and if he stays on the field, he will get you great returns.