University of North Texas wide receiver Jaelon Darden is one of the more intriguing prospects entering the 2021 NFL Draft. Find out where Darden ranks among his peers in this loaded WR class. 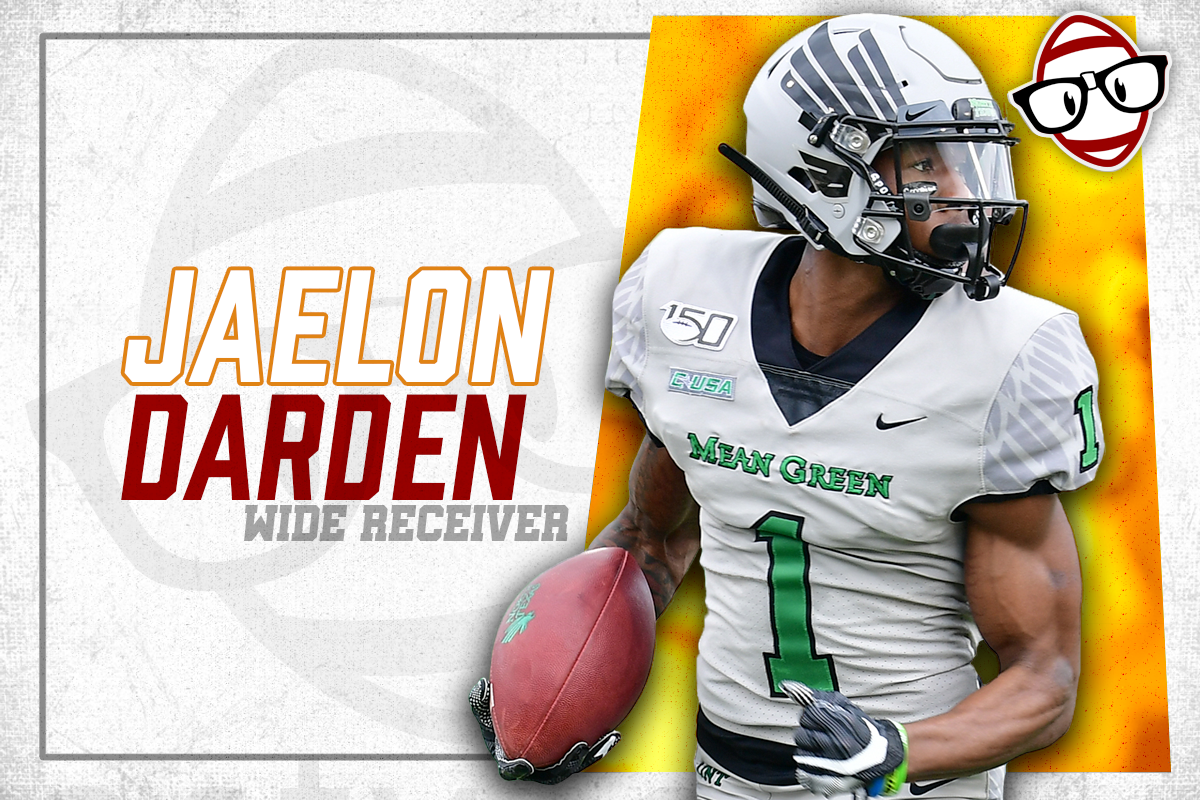 Standing at 5’9″ and weighing 174 pounds, University of North Texas wide receiver Jaelon Darden is a polarizing small school prospect. He’s somewhat of an unknown entity, but his film shows a lot of promise. In the right landing spot, Darden can be a draft-day steal, and here’s why.

Throughout Dardens’ entire career, from high school to college, he’s been a relative unknown. Few people know of him, outside of NFL circles, because he went to a smaller division one school. Darden elected to stay in his home state, following his time at Eisenhower High School in Houston, TX. Despite receiving offers from numerous division one schools like Virginia Tech, UNLV, and Memphis, he committed to North Texas.

Darden stayed there for four seasons and showed steady improvement year-over-year. Darden’s college career started slowly. He barely cracked the lineup in his freshman season as he totaled 32 receptions for 281 yards receiving and 3 touchdowns. Things changed in his sophomore season, though. Darden became more involved in the offense as he finished the year with 16 receptions and 1 touchdown more than what he had the year prior. However, the most significant improvement came when he finished with over 500 yards receiving.

Finally, Darden started to receive more playing time and, with it came the recognition he deserved. He led the North Texas offensive unit with 736 yards receiving and 12 TDs off 76 receptions. At the end of the season, Darden became a first-team all-conference selection. The numbers he posted then would hail in comparison to what he did in his next year.

It’s also worth noting that Darden showcased the ability to be a special teams threat at North Texas. In his four-year career, he had a combined 609 yards returning and a touchdown. Darden’s ability to be a return man could lead to more playing time early in his NFL tenure.

There are two things Darden possesses in his game: speed and shiftiness. It’s one part of what allows him to be a superior threat with the ball in his hands, but let’s not get off track here. Shall we get started?

Nothing quite sticks out in Darden’s film more than his speed and shiftiness. You notice it immediately. He often embarrasses eager defenders and takes advantage of them. Another great thing about it is that it doesn’t disappear against the higher-level competition, which you look for when watching a small school prospect. Below is a clip of Darden showcasing his speed against the University of California, Berkeley:

Darden hauls in the reception, runs around in his blocker, then flies down the sideline. Oh, and it’s against a team in a power five. This clip proves that Darden can be a speedster at any level.

Speed isn’t the only ability of Darden’s that I mentioned. Another tool of his that should be recognized is his shiftiness in open space. The guy has a knack for making people miss, and it shows. Look at this clip of Darden in North Texas’ game against Louisiana Tech.

Focus on how he bursts past the incoming defender, shuffles his feet as he moves to the right, then accelerates up the field. Not many guys can do this, period. Darden’s shiftiness in the clip above passes the eye test and tells me it’ll transfer to the NFL nicely.

Vision with the Ball

What good is that speed and shiftiness without vision? The answer is that it’s not, but that isn’t a concern you need to have with Darden. He can find any little room that the blockers create for him, and he utilizes it. It’s highlighted in the two clips above.

In the first clip, you see Darden look upfield as soon as he has possession of the ball and identifies where he needs to go. He finds a sliver of room on the outside of the blocker in front f him. Even though the blocker is getting demolished by the defender, Darden utilizes his speed to get to the outside. He then immediately cuts upfield. It was the right read as it led to a TD.

You can really see how good Dardens vision is in the second clip. Here, you see Darden reel in the catch and immediately look to the end zone. He makes one move bursting slightly up the field to get past the incoming defender. Once he does that, he realizes he has no room outside the blocker to his left. Realizing that, he then finds evades a defender and utilizes his god-given ability as he speeds up and crosses the pylon with ease.

Transitioning to the NFL

One skill isn’t meaningful without the other. Most college players entering the NFL with Darden’s type of movement skills don’t have the vision that he does. It makes him one helluva threat with the ball in his hands. In the NFL, Darden can make anyone miss with ease and has the vision to find the right holes in the second level.

The issue for Darden will be whether or not he can adjust to the speed of the NFL game. Players at high-level schools like Alabama, Clemson, and Ohio State already have difficulties adjusting to the speed at the NFL level. With Darden, he’s coming from a small school where his team and the opposition ran at a slower pace. I expect it to take some time for him to adjust to the NFL game.

In Darden’s film, the weaknesses stick out as much as the strengths. The two real weaknesses to his game are the lack of a route tree and physicality. Although, I find one more concerning than the other.

Darden’s film contained five different routes: bubble screens, flies, drags, corners, and the occasional slant. Outside of that, he ran nothing else. It’s a little disconcerting for a guy of his stature and movement ability. However, it looks to be more the fault of North Texas’ scheme.

Still, he hasn’t shown the ability to do it at the college level. He may have the attributes to do it, but that doesn’t mean it’s going to come together. Players like former first-round pick wide receiver Tavon Austin could never connect the dots. It’s a bit worrying as it lowers his ceiling at the next level tremendously.

I’m more concerned about Darden’s limited route tree than I am about his lack of physicality. At North Texas, he never really ran into bigger, stronger corners, but when he did, they bullied him. In contested catch situations, Darden often shined away or would let the defender control him. A clip of one of these moments is below:

This is one of those occasional slant routes I talked about before. For wide receivers that dominate contested catch situations, one thing they do is go after the ball. As you see in the clip above, Darden didn’t do that; he wanted the ball to come to him. Then, he pulled his arms away once the defender contacted him. It’s a how-not-to clip on what to do in contested-catch situations from Darden.

While I’m typically not a fan of guys like Darden, this won’t be an issue for him in the right scheme. We’ll get into this some more later, but Darden needs to be on a team that can quickly get the ball into his hands in the open field. If he’s asked to be more of a threat than a WR, the physicality or lack thereof means nothing.

Darden is, without a shred of doubt, my favorite late-round flier this year. He’s overshadowed because he went to North Texas. Darden has the physical tools to do more than just succeed if he lands in the right situation. In Darden’s senior season, he finally broke through the barrier and destroyed the competition. I expect the same to be true in the NFL. It will take him some time to piece things together, but in the meantime, he’ll be able to contribute to special teams immediately. Right now, I see Darden going in the fourth round of the 2021 NFL Draft, and that’s where many analysts have him projected going.

There are two potential landing spots that I would love for Darden. First and foremost, the best spot would be with the Green Bay Packers. Darden isn’t a convention WR, so lining up from All-Pro WR Davante Adams would be a significant advantage for him. Plus, head coach Matt LeFleur’s scheme gets the ball into playmakers hands quickly, which is imperative for Darden. It also allows the packers to waste their first three picks once again, but this time they’ll at least get a solid contributor later.

A dark-horse spot for Darden would be on the New Orleans Saints. Head coach Sean Payton utilities his playmakers and does it well. In this scenario, Darden could develop and become third in line for touches a year or two down the road.

As it stands, Darden can be selected in the late third-round of your rookie drafts. That’s where I’ll be choosing him moving forward. Worst case scenario, he’s a gadget player that doesn’t have much fantasy value. The best-case scenario could see Darden becoming a player with a guaranteed workload in the form of targets, carries, and return opportunities. That would make Darden super valuable and a WR2 for your fantasy teams.

It’s all up to Darden and where he lands for that to become the case. However, it’s at least in the realm of possibilities; we should know more on draft day. If he doesn’t land on a team that finds a way to feed its playmakers, he can’t be drafted. He’ll never be your typical run-of-the-mill wide receiver.