Jamin Davis has taken a meteoric rise due to a breakout 2020 season – where does he fit in the NFL and IDP leagues? 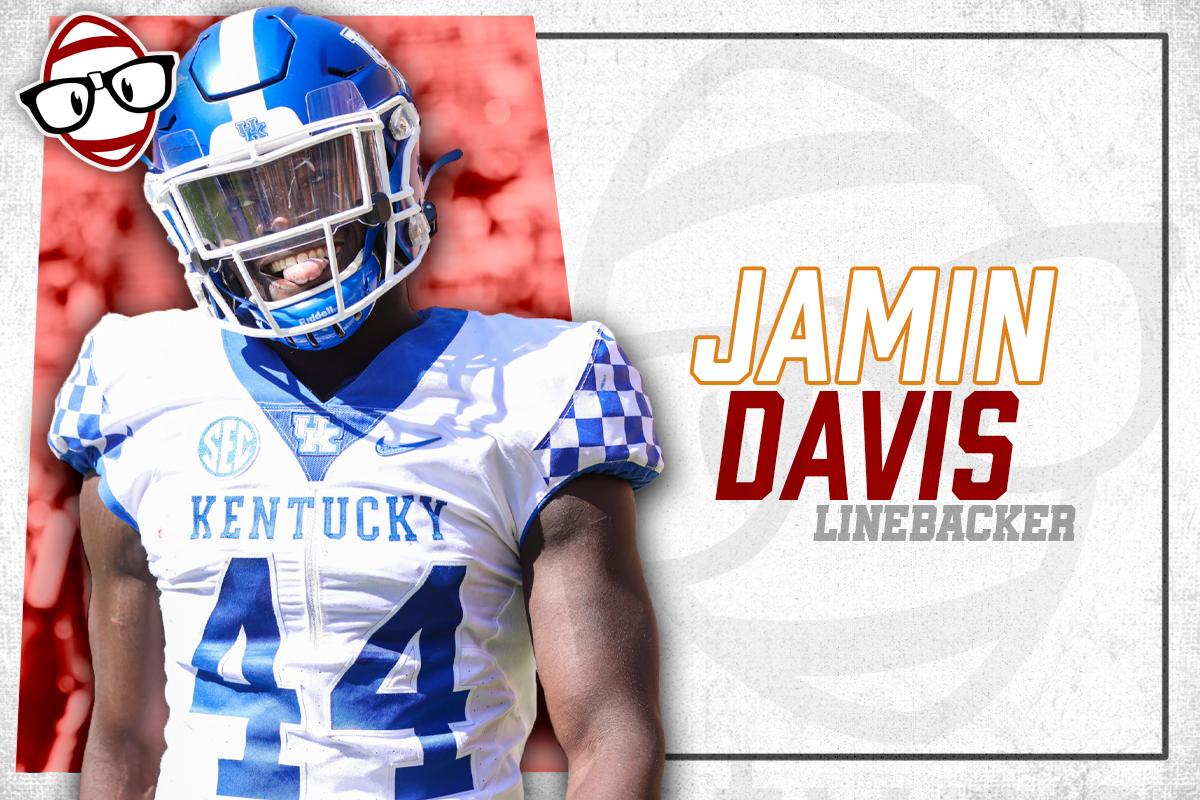 The Wildcats have sent a few linebackers to the NFL, such as Wesley Woodyard and Danny Trevathan. The latest Kentucky LB may be the best of them, and after a strong 2020, Jamin Davis has vaulted himself into Day Two draft talks. He has crazy athleticism and could be one of the biggest steals of the draft when all is said and done.

Davis played his high school ball at Long County, located in Ludowici, Georgia. He was a three-star prospect and didn’t garner many offers. Davis wanted to play in the SEC, and Kentucky was the only team in the conference to offer. There were offers from Georgia State, Georgia Tech, and Louisville but ultimately, the draw to play in the SEC was the deciding factor.

It wasn’t until 2020 that he reached the field as a full-time starter, and it was an impressive season. Davis’s 102 tackles ranked third in the SEC and seventh in the NCAA. He had three interceptions, with one returned for a touchdown. The INTs coupled with two pass deflections were a good indication of his versatility and coverage skills.

At 6’4″ and 234 pounds, Davis is the ideal size for a linebacker and moves incredibly well for his size. He has excellent range and phenomenal short-range quickness. For having only 11 starts, he has good instincts and is a voracious tackler.

Davis is one of the best tacklers in the class; he hits hard and has good technique. He can sift through traffic and peel off of blockers to make tackles.

I pieced together several impressive tackles in this sequence from RSHighlights to showcase the tackling ability. Davis squares up and takes on runners; he is strong and able to stimmy forward progress. Even if he cannot tackle getting lined up, he is powerful, and runners don’t break free when Davis gets his hands on them.

For a player with limited experience, his instincts are impressive. Davis reads plays as they develop and isn’t fooled by misdirection. He typically makes the proper read, and his first steps are in the direction he needs to be.

This play also reiterates the tackling ability, but I love how he reads the run and is patient through traffic. Davis waits and then knifes through to wrap up the runner while forcing a fumble. It is such a smart play, and his instincts show through on so many of the plays I watched. He is rarely out of position.

Davis has the length, and when coupling it with his athleticism, he will fit nicely into many schemes in the NFL. He has immense upside in coverage and can get after the passer if needed.

Another instance of instincts as well, also showcasing his athletic ability. Davis had limited opportunity to play man coverage. He typically dropped back in zone, and in this play, he makes an easy interception and then takes it to the house on the return. There is a lot of big-play upside in his game, and he can give a team much more than just tackles.

A lot of what makes Davis a promising prospect is still projection. The ability to be a good coverage linebacker is based on what we can project. At Kentucky, he mainly dropped back in coverage and wasn’t asked to track running backs or tight ends as they crossed the line of scrimmage. He only played 26 snaps in man coverage.

Davis has ten career starts and played at a high level. Can it be sustained in the NFL? His tape is impressive, especially when considering how little he played in college. But we have seen many players over the years put together one impressive season and then never flash again.

Throughout the offseason process, Davis has been slowly gaining buzz and has earned second-day draft projections. He isn’t on Micah Parsons’ level but has a similar ability to do everything and make big plays. With more starts, we would likely be talking about Davis in the first or second round. Round three is the sweet spot and where he will most likely be drafted in April.

With the NFL rise, Davis has also risen in rookie drafts. In the past few I have participated in, he was selected in the early second round; after Parsons, Zaven Collins, Dylan Moses, Nick Bolton, Jeremiah Owusu-Koramoah, and Chazz Surratt. It’s a solid linebacker class, and I would be comfortable taking Davis after Bolton in the latter half of the first round.

With limited reps, projecting what Davis could be is an imperfect science. The athletic ability and what we have seen points to him being a really good LB in the NFL. I would be confident drafting Davis in rookie drafts. He will be an LB2/LB3 at the NFL level, with the upside to be more.