Patterson rushed for 1,072 yards in only six games this season, can we expect him to run roughshod over the NFL? @FFPeeblesChamp gives you the Buffalo RB breakdown. 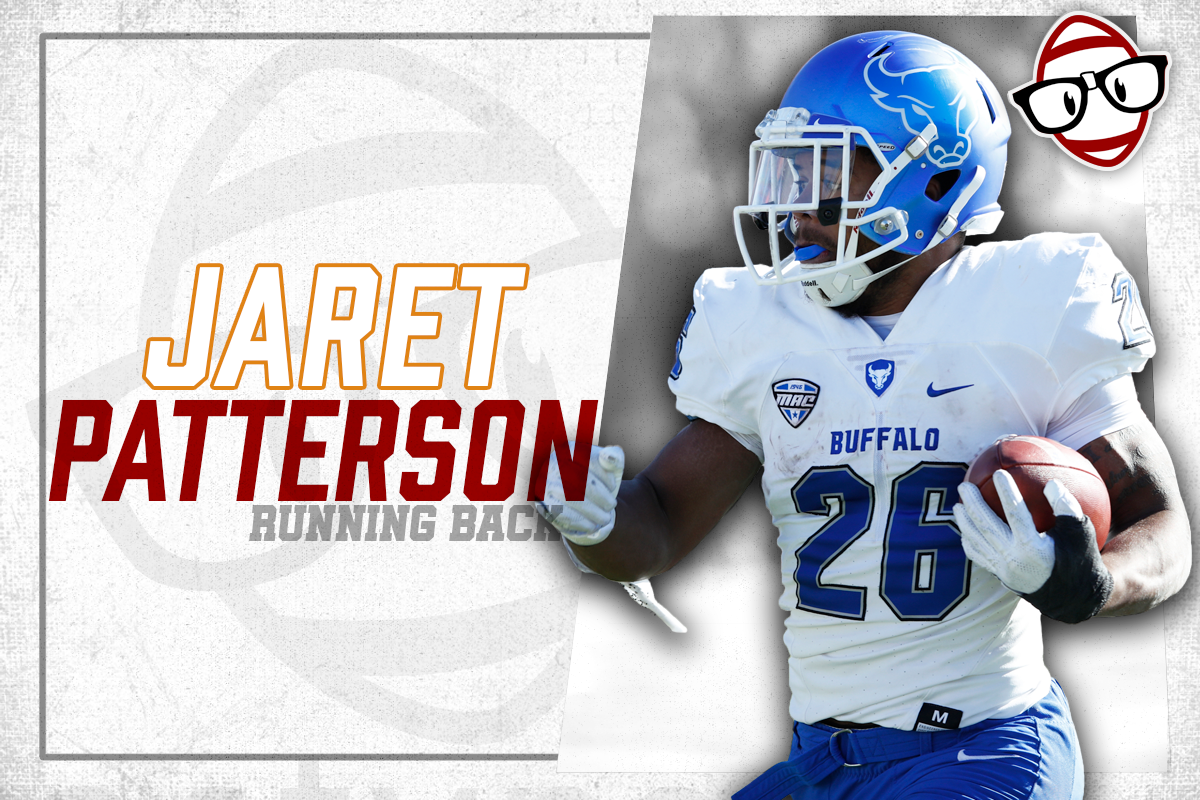 Jaret Patterson ran roughshod over MAC defenses the past three seasons, opting to enter the 2021 Draft rather than continue to break more records. He is a bit small for a feature back at 5’9” and 195 pounds, but he handled an enormous workload at Buffalo.

As a two-star athlete, Patterson was not a sought-after prospect despite rushing for 2,045 yards and 23 touchdowns his senior season at Pallotti High School in Laurel, Maryland. He helped lead the school to two state championships, but it wasn’t enough, and he only received an offer from Buffalo.

Patterson showed flashes as a freshman while rushing for over a thousand yards and fourteen touchdowns despite only having two games over twenty touches. He caught seven passes and had a massive game versus Kent State, a recurring theme, as you will see, rushing for 187 yards and two scores.

Patterson’s 2019 season put his name on the map and caught the eye of scouts and fantasy owners. He was one of the top scorers in college fantasy, rushing for 1,799 yards and 19 scores. In the last six games of the season, Patterson was insanely productive. He rushed for 160 yards versus Eastern Michigan, 192 versus Toledo, 298 against Bowling Green State University, and capped it with 173 rushing yards in a bowl game versus Charlotte.

Closing out a career

Last year’s season almost didn’t happen for the MAC, and Patterson began to prepare for the draft. A shortened season ultimately happened, and he eclipsed 1,000 yards in only six games. The two big performances in the middle of the season got national attention. Patterson rushed for 301 yards and four touchdowns against Bowling Green State University and followed it up with 409 yards and eight touchdowns against Kent State. Neither defense is stout by any means, but still an impressive feat.

Patterson has the insane production; where does he win, and how can he be successful in the NFL?

Patterson is a shifty runner and handled a heavy workload in college. He is small but mighty and doesn’t take many direct hits. He uses vision and a good array of moves to create on his own in the open field.

Patterson does a great job of allowing his linemen to make blocks. He uses his diminutive size to settle in behind linemen, and he is good at picking the right time to explode out of hiding.

In this run, Patterson slowly runs parallel to the line to give the blockers time to set, and his timing is ridiculous. He explodes through a small crease and breaks a tackle en route to a long touchdown.

I watched many Patterson and Buffalo plays this year, and this play was one of my favorites. He could have quickly gone down for a short loss, but he patiently cut back and used what blocks were still there for a nice gain. I could have filed this play under all the article’s headers, his feet kept moving, and the shiftiness is on full display.

A running back should always be churning and grinding for extra yards – Patterson never stops moving his feet and fighting. The guy never quits until he is down on the ground.

Another beautiful gain on this play, he makes something out of not much by never stopping. Patterson slides through the smallest crease, spins out of contact, and is still dragging defenders twenty yards downfield. He never gives up on the run.

Patterson anticipates where the creases are and uses what he can, even when they are on the ground.

This play looked like a loss, but Patterson was able to turn it into a nine-yard gain. He squirts through a small hole and works into the second level as his blockers get knocked out of the play.

This play is another excellent example of how difficult Patterson is to take down. He has a nice run through his vision alone, followed by a quick change of direction, and he has a huge gain. I loved that he kept his balance; the cut was vicious, which almost led to him falling.

With 636 career carries, Patterson did not fumble the ball once. Zero fumbles over 32 games with 3,884 yards. I don’t need to say anything else in this little paragraph. Wow.

The lack of pass-catching is a concern and will likely keep him from securing a more significant role in the NFL. The few passes he did catch, he didn’t showcase natural ability or stand out.

Patterson is a bit small, but the more significant issue is the lack of breakaway speed or elite moves. When he reaches the second level, he uses angles well to create separation from defenders but lacks the speed to pull away. While he is shifty and can make people miss, he isn’t elite and will not be making incredible runs while making half of a defense whiff.

He profiles more as a pass-catching third-down back with his size, but he is better running through the middle and using his patience to gain yards. Patterson isn’t big and powerful enough to be as effective up the middle as he was in college in the NFL.

Now comes the most challenging part of my job, being objective on a player I love as much as I love Patterson. He’s an exciting player to evaluate on tape; every game is littered with impressive runs and plays where he makes multiple tacklers whiff. He was playing in a conference that rarely produces an NFL defender. It makes it tough to be the voice of reason when a player is so much damn fun to watch!

Draft capital will tell us all we need to know, will there be a team willing to draft Patterson and give him a shot? Likely he will end up being a Day Three draft pick and will be a backup who can provide you a fill-in splash game here and there in his career. I don’t see a team giving him the capital and a chance to be “the man.”

In rookie drafts, Patterson is an excellent late-round flier – I would be happy taking a shot on him in the third round. With hopes, he finds a few starts someday and contributes to my dynasty team. If he gets draft capital to a running back needy team, I may go a bit higher, but the third round is Patterson’s sweet spot.

One of the most productive running backs in college the past two seasons, Patterson would seem primed to make the jump to the NFL. There are things to love about his game but without any elite traits, it will be tough for him to make the transition.