Can the elusive Louisville product be a draft day steal? 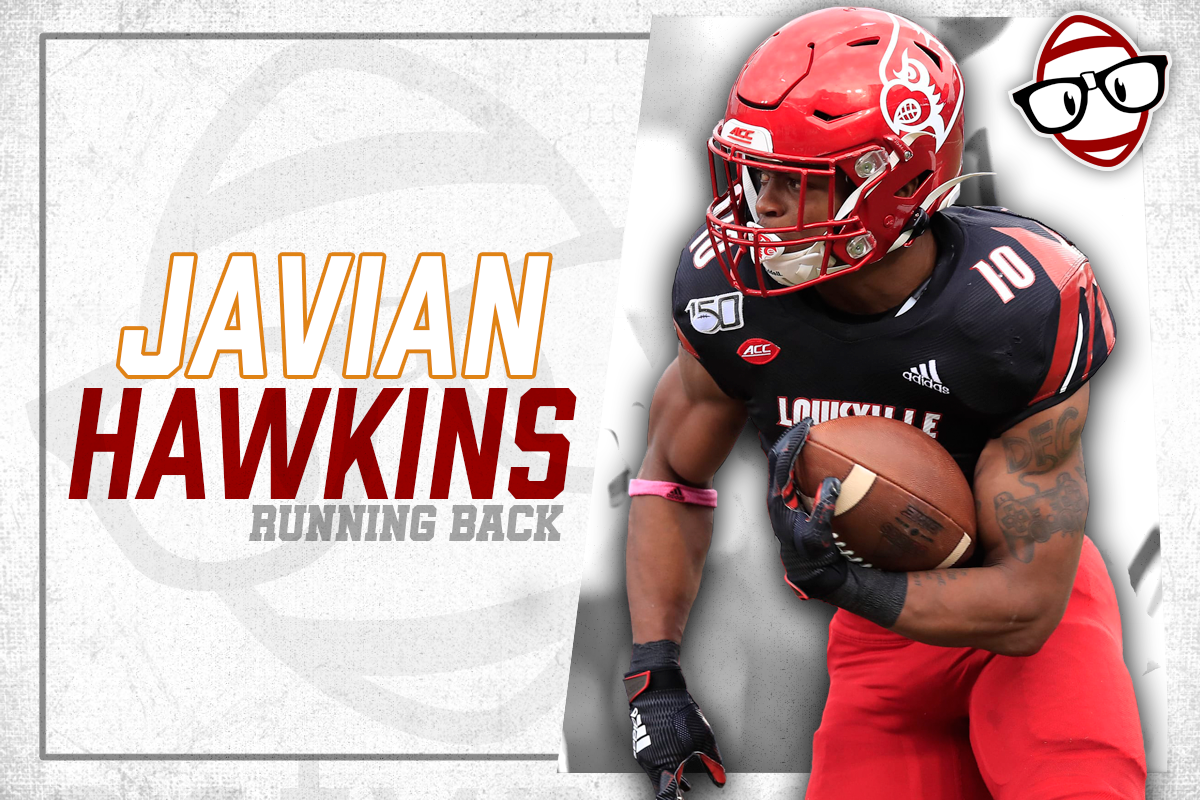 Could the elusive Louisville product be a draft-day steal?

Hailing from Titusville, FL, Javian Hawkins was a three-star recruit, weighing a diminutive 157 lbs in high school. He put on nearly 30 lbs to hit a listed playing weight of 185 at 5′ 9″; ESPN now has him at 195.

While he rarely found the field as a true freshman, Hawkins set the ACC on fire in his second season, running for 1525 yards and nine TDs. During his COVID-shortened 2020 season he ran 133 times for 822 yards, adding 16 catches for 127.

Hawkins is a true blazer, posting a verified 4.36 40 time in high school.

It’s a tough sell for me to get excited about any sub-205 lb back, no matter how fast or productive they are. That said, if you’re going to be a small player in the NFL, you’d best be fast, and Hawkins is all of that. If he does in fact weigh in at 196 or heavier he’ll have an acceptable-but-not-great BMI of 28.9 (we like to see 30; 28.5 is my absolute lower boundary).

His production profile is decent, but not amazing.

His 1583-yard best season is pretty outstanding, good for fourth in this class, but it’s 400+ yards behind 3rd. His best Scrimmage Yards Per Team Play mark is a decent 1.85; his best Dominator Rating was a .272, which is just ok, but I’m dubious as to how predictive DOM is for RBs, anyway.

At 196 lbs, comps for successful NFL backs are few and far between. We’re looking for CJ Spiller or Chris Johnson or Nyheim Hines. Unfortunately, we don’t know much of Hawkins as a pass-catcher, and that’s an essential part of the profile for any smaller back.

If we weighs in closer to 200. there are a few more hits in his comps, guys like Ray Rice or Jamaal Charles.

In terms of tape, there’s a lot to like about Hawkins. He’s not just a speed guy.

Hawkins has some great movement skills, cutting on a dime and weaving through traffic at speed. He shows off a nice jump cut above and explodes through the gap; it doesn’t look like he’s moving that fast, but he covers ten yards in a blink.

I like that he finishes his run. Hawkins isn’t big, but he runs hard and doesn’t shy away from contact.

Hawkins is not scared. He drops the shoulder and tries to go through the guy. I love the fight.

But damn, he’s got some jets:

This clip shows a couple things I like about Hawkins and one I don’t. The raw acceleration is ridiculous; he’s at a dead stop one yard away from a defender when he bounces this, and he’s fast enough to run by the whole defense. He shows some solid vision and pathing at the second level, using his blockers well.

On the other hand, he’s slow to read the collapsing gap at the first level, resulting in him running into the back of his blocker and needing to create a spectacular play.

Here’s another similar run from that same game:

Again, very high-levels of stop/start ability and burst on display. Hawkins is almost instantly in the second level, and it takes a good 1-on-1 tackle by the safety to stop a massive TD run. That’s a reality any time Hawkins steps on the field.

It looks like there’s a bit of indecisiveness at the LOS; the hole he eventually hits was always there, though it takes him a second to find it. It seems like he uses his speed to get out of some jams.

It’s good to see him involved in the passing game. He looks ok catching the ball, but not great.

Hawkins’s biggest deficit will always be his size. It’s a very limited pool of hits with his profile unless he hits the 205 lb mark at weigh-ins.

His vision problems may be just as concerning. While he has the tools to get out of trouble, his difficulty reading the 1st level on his runs will make it tough to trust him and tough for him to get on the field in the NFL. It’s absolutely something that can be improved upon, but we have to wonder if he’ll get the reps to do so.

Hawkins has a few pass-catching reps on tape- screens, delay routes, flats- but I wouldn’t describe it as a strength for him. On the reps I watched he caught the ball up against his body, and he wasn’t as fluid as I would like for a guy who’s going to be profiled as a scat / change of pace back.

Finally, I’d like to see him win one-on-one in the open field more. I like his toughness, but at 195, we want to see guys deking the defenders, not trying to truck them.

Look, if you’re in a startup right now with rookies in the pool, it’s reasonable to grab Hawkins. He’s going super late- 180th player off the board in the startup I’m in currently.

Similarly, I don’t have a problem with anyone taking him in the third or fourth round of rookie drafts as a dart throw, if you’re enamored with his tape.

He is likely to be a pro-day riser when people see that 4.32 on the board. If I can snag him cheaply now and then flip him for a profit when that hype train fires up, I’m very much so interested.

For me, I’m not typically investing in an undersized back unless the rest of their profile is absolutely bulletproof- i.e., Kenny Gainwell. The vision issues and lack of passing game work are probably going to keep me off of Hawkins enough to let other people grab him in front of me in most leagues.

The exception will be, as always, if he somehow gets great draft capital. But I don’t see him being a day two pick- I’m thinking fourth-fifth round, though there isn’t too much in front of him in this class, either. Even if he gets DC, someone else in my league is probably going to be more excited than I am.

That’s it for this one! Happy drafting.