Take a dive into one of the most explosive athletes in the upcoming 2021 rookie draft, Alabama’s Jaylen Waddle. 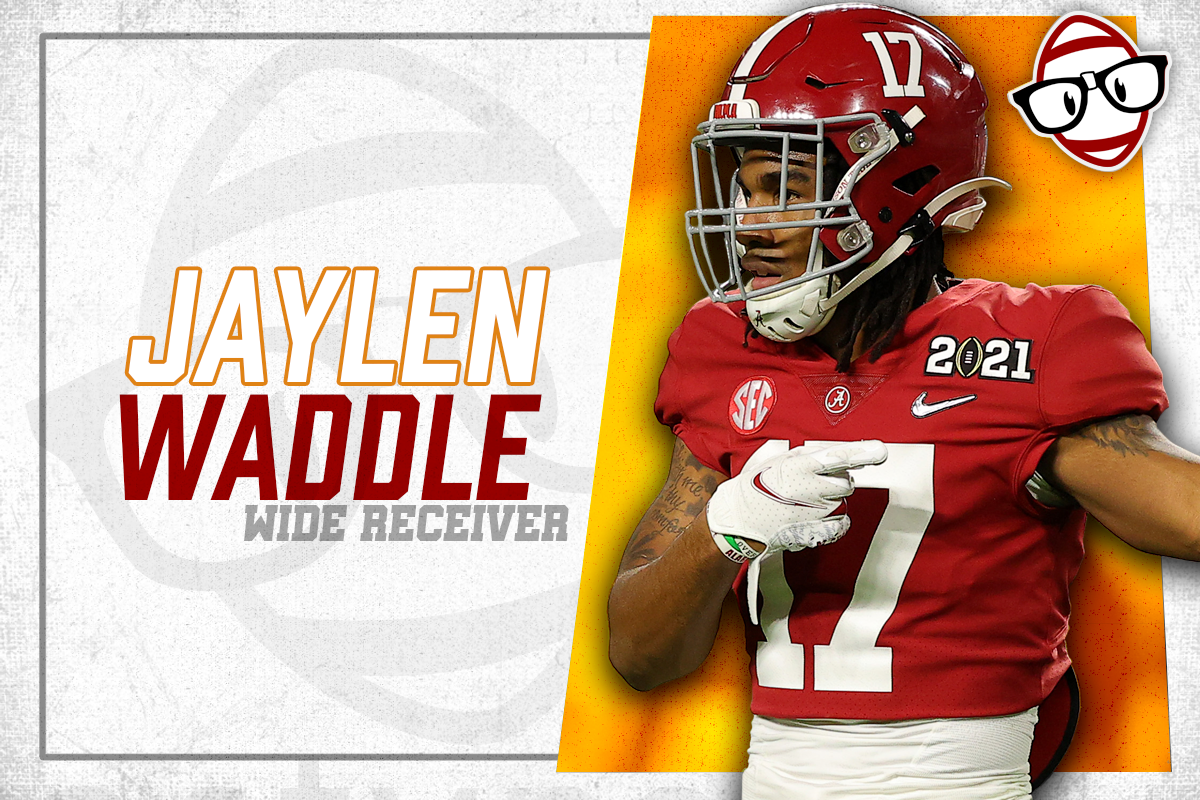 There’s one receiver flying under the radar in a loaded rookie Wide Receiver (WR) class. He played for the Alabama Crimson Tide and was one of the best receivers in college football. No, I’m not referring to Heisman winner WR Devonta Smith. Instead, I’m talking about his teammate, Jaylen Waddle. In this article, we will be breaking Waddle’s film and discussing why he should be one of the first receivers off the board in your rookie drafts.

Waddle committed to Alabama in 2018 as a four-star prospect and the #5 WR in his class. He also ranked as the 39th player nationally in his class, according to 247sports.

When Waddle finished his college career earlier this year, he finished with 1,999 receiving yards and 17 touchdowns (TD). However, what made Waddle special was his ability in the return game. He finished his career with a total of 947 return yards and three TDs.

While these stats do not immediately jump off the screen, it is important to note that he was receiving limited snaps until 2020. With 2020 set to be his breakout season, he suffered an ankle injury on the opening kickoff against Tennessee. The news came only four games into his junior season.

Before the injury, Waddle was on his way to a statement season. He boasted a 34.38% dominator rating, according to thecuttffb, which is a WRs percentage of total offensive production. For context, Player Profiler illustrates that a dominator rating of 35% or more “indicates that a wide receiver has the potential to be a team’s No. 1 WR and/or a high caliber contributor.” Now, let’s dive into what makes Waddle such a great prospect.

Waddle might be the fastest receiver in this 2021 rookie class, with some analysts predicting a sub 4.3 40 yard dash time. Check out this film below of Waddle showing off his speed to get to the edge on an end-around run.

Here’s a clip of Waddle showing off his blazing speed. Focus on how he takes the top off the defense and takes the reception to the house.

Another thing that stands out to me regarding Waddle is his hands. Waddle led his team in catch percentage in the four games he played while having only having a 3% drop percentage in his limited sample size in 2020.

One of the most important aspects of a receiver’s game is his ability to catch the ball, and Waddle does that at an exceptional level. Take a look at this clip of Waddle showing off his ability to elevate and get the ball at its highest point.

Take a look at another clip where Waddle comes back to the ball and makes an excellent contested catch.

One of the things that I look for in my receivers is how they are utilized in the return game. If they show the ability to be elusive and explosive in open space, they have a clear path to early opportunities. This comes in the form of special teams, ala Tyreek Hill, early in his career.

One would be hard-pressed to find any weaknesses in Waddle’s film. With that said, he still has to deal with the ankle injury mentioned above. Waddle’s recovery will be crucial to his NFL Draft stock and your rookie drafts.

Waddle doesn’t have a real “breakout” WR1 season on his resume in college because of the injury. However, I firmly believe that Waddle’s talent speaks for itself. He’ll be one of the first receivers off the board in the 2021 NFL Draft.

It doesn’t take much of a dive into Waddle’s film to know that he is a unique talent. He might be the fastest receiver in this draft, but that’s not his only skill. He also runs a diverse route tree, has secure hands, and has the elusiveness and explosiveness needed to become a threat at the next level.

Many have tried to make comps to Kansas City Chiefs WR Tyreek Hill in past rookie draft classes, but the comparisons always seemed off. However, if there is a receiver that I believe profiles the most to Hill, it’s Waddle.

If he were to land on a team like the Miami Dolphins or the Los Angeles Chargers, the sky is the limit for Waddle. That allows him to build with a young quarterback that can air the ball out. I anticipate him going off the board on day one of the NFL Draft. In your rookie drafts, he’ll be going in the middle of the first round. If you grab a few shares of Waddle in your upcoming rookie drafts, you’ll reap the rewards for years.

Want to watch more Jaylen Waddle game film? Join the Nerd Herd for just $2.99/month and get access to the Dynasty Nerds Prospect Film room. See cut ups of players film, not just the highlights, but every play were in during the game.

Chris Herndon IV: Is he a Sneaky Stash for 2021
Carson Wentz Has Been Shipped To Indianapolis