Freakish speed, athleticism, and power all rolled into one. @DynastyNerd101 tells us why Jayson Oweh is a defensive end you’ll want to keep an eye on in this 2021 Draft Class. 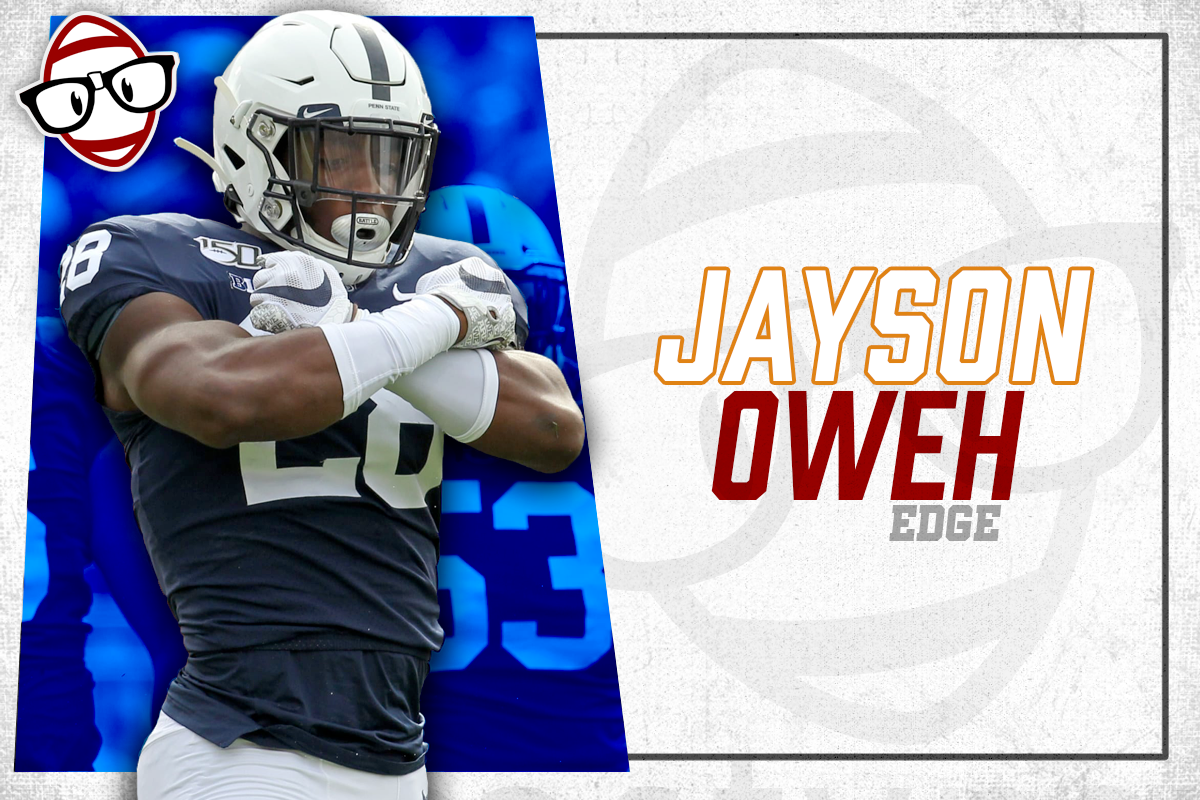 Jayson Oweh is a naturally gifted freak of an athlete who hails form New Jersey. He began playing football as a Junior in high school after transferring to Blair Academy. By rule, players were required to play two sports if they intended to play one. Oweh was a basketball player before he was a football player. After his first season, he didn’t like the physicality and wasn’t sure he liked the sport at all. His mother was critical of the sport, concerned for the health and safety of her son. Despite his distaste for the sport, Jayson returned for another season. When he began making plays and dominating on the field, he realized that maybe giving football a second chance wasn’t a bad idea after all.

Oweh attended Penn State University from 2018-2020. His freshman year was quite unspectacular, playing only four games and recording four tackles, two TFL, and two sacks. As a sophomore, Oweh started to gain some traction. Through 11 games, he recorded 21 tackles, five TFL, and five sacks. Heading into the 2020 season, Oweh was gaining national attention and was expected to break out in a big way. Unfortunately for him, the sack numbers were disastrous. Through 7 games, he recorded 38 Tackles, 6.5 TFL, and a big, fat goose egg in the sack column. So how could a guy who didn’t record a single sack be on his way to being drafted in the early rounds? Let’s take a look!

Jayson Oweh is a monster. He checks in at 6’ 5” and weighs 252 lbs. What’s more impressive? The man runs sub 4.4 and was clocked running as low as 4.33 in the offseason before the 2019 season. At his Pro Day on March 25th, Oweh plans to run sub-4.4 again and show scouts his jaw-dropping speed.

One thing I love about his speed and athleticism is that it translates well on the field. He combines that speed with great bend and balance to create leverage, as he shows here against Michigan State.

Oweh is more than just a speed rusher, though. I watched several games and was impressed with his power and willingness to use his hands to knock the linemen off balance. Often times, speed rushers who rely on their speed and athleticism to be disruptive, fail to show off their power. This is where Oweh is different.

One of the fastest edge rushers in this class, Jayson Oweh shows off he is more than a one trick pony. His hip explosion, hand power, balance and leverage is elite. Makes OTs look silly.

I watched several games and saw this type of power over and over again. Impressive! #IDP pic.twitter.com/HCHMZDlg4d

In 2020, Oweh graded out as one of the highest defenders against the run. He has outstanding balance and uses his athleticism to make plays like the one we see below. His explosive punch followed by his ability to see the run and react quickly help him make these impressive plays. Though he should have had a TFL on this play, I thought he disengaged quickly and nearly made the play.

It was really difficult to find weaknesses in Oweh’s game based on the film that I watched. I do think that he could do a better job of recognizing plays and understanding the game. However, this comes from him being so raw and having less football experience than most. On this particular play, it would have been nice to see him be more decisive off the edge and to blow this TE up instead of dodging him. Had he done so, I believe he could have caused some disruption and created just enough hesitation to allow his teammates to make the play. Overall, I thought this was a bit lazy on his part.

The biggest and most obvious knock for Oweh is that he produced zero sacks in 2020. Many people are concerned by this and that is certainly within their right to be, especially for a defensive player who will be drafted as high as he will be.

Despite the lack of production in 2020, the impact Jayson Oweh had was undeniable. “Analytics guys” might struggle to give him credit, but the “Film guys” know that he is a gifted prospect who will be productive at the next level. I expect Oweh to be selected anywhere from the late first to mid second round of the 2021 draft. Because of his combination of speed and power, I don’t think he will have a hard time fitting into many schemes at the next level. Wherever he goes, he should be able to make an impact and be a productive IDP rookie. I currently rank him as the #4 DE in this class and am excited to see what he does in the NFL.