The Notre Dame superstar linebacker emerged in 2019 and 2020, where does he fit in the NFL? @FFPeeblesChamp gives us the lowdown. 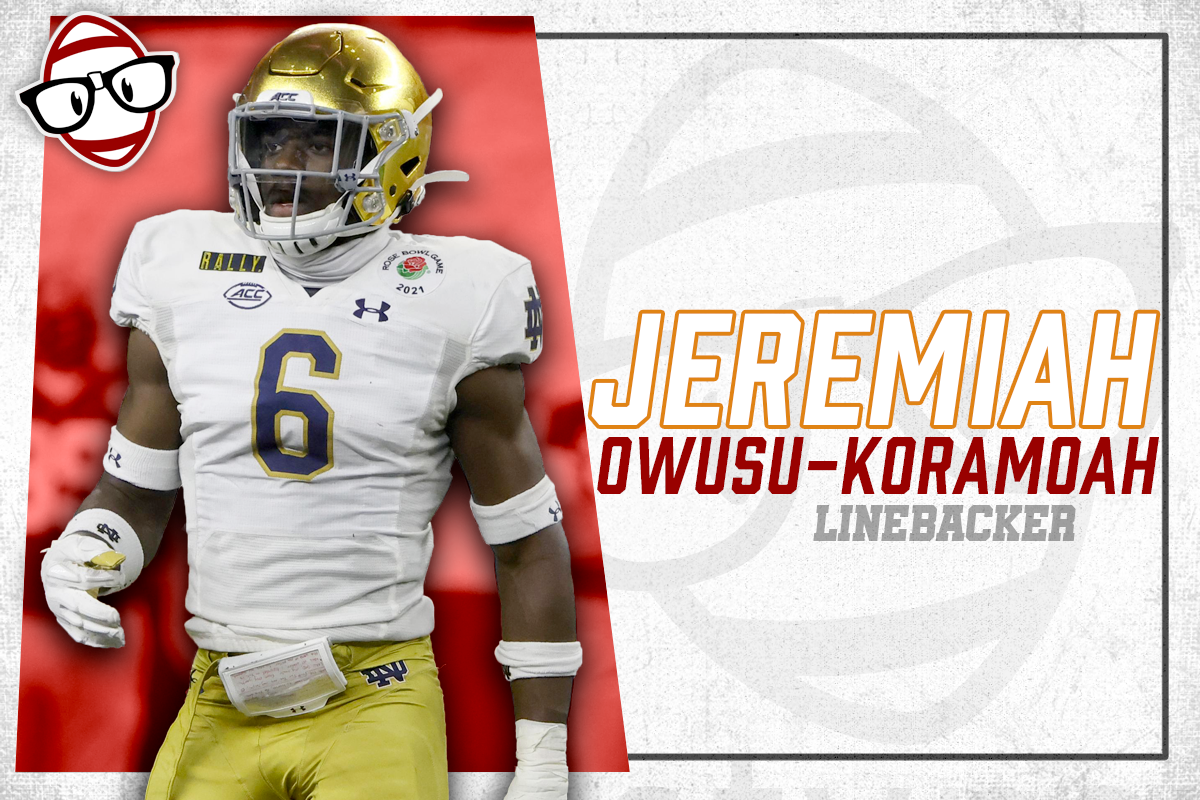 Jeremiah Owusu-Koramoah was a huge reason the Notre Dame defense was so stingy this season. He’s a versatile linebacker with great range and strong instincts. The senior linebacker really stands out when you watch Irish games, and he has the potential to be an exceptional defender in the NFL.

Owusu-Koramoah played his high school ball at Bethel High School in Hampton, Virginia. He was a three-star linebacker and had interest from many schools, but Notre Dame was the biggest name by far. Originally committed to Virginia, he changed his mind and took visits to Michigan State and then Notre Dame- where he committed and enrolled early.

The talented linebacker didn’t see the field until his junior year and made a tremendous impact right away. Owusu-Koramoah amassed 80 total tackles with 5.5 sacks, four passes defended, two forced fumbles, and two fumble recoveries. He was one of the most productive linebackers, and the Irish knew they had something special.

Starting 2020 on the Dick Butkus Award watch list for the top linebacker in college football, Owusu-Koramoah did not disappoint. His numbers were not quite as impressive, but the difference he made in games was. He finished with 62 tackles and had three forced fumbles, one of them returned for a touchdown. Jeremiah chipped in an interception, and three passes defended as well. Owusu-Koramoah was named an All-American and won the Dick Butkus Award.

Speed, ability to cover, instinctive, vision – Owusu-Koramoah fits the mold of the quick and versatile linebacker the NFL seems to be seeking more in today’s game. He can cover backs and receivers with his 4.4 speed. He is built like a safety and has the strength to hang with tight ends.

Owusu-Koramoah is an intelligent linebacker and reads plays as they are developing. He has excellent vision and sifts through traffic effortlessly to make plays.

This play shows the way he works through traffic to contain a running back. Owusu-Koramoah shifts through both blockers on the right side and quickly wraps up Najee Harris as he gets to the line of scrimmage.

Here, the Notre Dame linebacker reads the quarterback and keeps square to the play to keep everything in front of him. As the play breaks down, he shoots upfield to wrap up the quarterback – forcing a fumble as he punches at the ball. Smart play and great effort to cause a turnover.

Another example of Owusu-Koramoah recognizing the play and getting to the offensive player in a hurry. He rarely missteps or reads a play wrong.

The speed will show at his Pro Day, but you don’t need a stopwatch to see what he can do. He has tremendous short-area quickness and explosion to accompany the speed – it’s an impressive athletic trio.

This play introduced a lot of the world to Jeremiah Owusu-Koramoah. He recognizes where the ball is going and covers seven yards in a flash to disrupt the pitch, getting to Travis Etienne just as the ball does. It forces Etienne to bobble it, and it lands in Owusu-Koramoah’s hands for an easy pick-six.

Here we have an example of the short-range burst; he gets up to speed so quickly. Owusu-Koramoah is engaged, and when he breaks free, he covers ground so fast – dropping Breece Hall for a significant loss.

Along with speed, it’s impressive how much ground Owusu-Koramoah can cover. He gets from sideline-to-sideline and makes plays far from where he lines up. His motor never stops, and he makes some phenomenal plays.

Owusu-Koramoah starts on the left side, crosses over to the right during pre-snap, and then gets the sack fifteen yards deep – all within eight seconds. He gets upfield so quickly; it’s impressive watching him play!

The instincts, speed, and range all work together and make him an incredibly versatile linebacker. He can come up and stuff a run or swing out and stop a running back trying to turn the corner. He can blitz and pummel the quarterback. Or he can drop back and cover a slot receiver.

Covering Amari Rodgers is tough for some cornerbacks; Owusu-Koramoah hangs with him on this clip. Rodgers made the catch on the slant, but Owusu-Koramoah is right there and punches it out as the receiver tries to break up the field.

I love this play so much, and it’s what gets scouts drolling over Owusu-Koramoah. He follows the slot receiver off the line, a matchup many receivers easily win versus a linebacker. The ball should have been lofted a little farther, but 99 of 100 linebackers wouldn’t be in position, let alone make the interception. It was a beautiful play on the ball and an easy pick for the Irish linebacker.

Owusu-Koramoah is a bit undersized for an NFL linebacker at 6’1” and 215 pounds. The build is more like a safety and could limit how much he is used in pass-rushing situations and run defense.

His speed and motor lead him to over pursue at times and take bad angles – Owusu-Koramoah often made up for it in college with speed. In the NFL, most of the guys are fast, and it could take him out of plays. He missed some tackles due to this, but he is also asked to cover massive amounts of space.

When it comes to being engaged, he struggles to get off blocks and will not want to tangle with an NFL offensive lineman. Owusu-Koramoah needs to work on this, or it will limit how much he is used to getting upfield and in opponents’ backfields. It could also be an issue with opposing running backs, specifically bigger backs. Guys like A.J. Dillon and Derrick Henry love to stiff-arm or run over smaller defenders, and Owusu-Koramoah is a good 25 pounds lighter than both of those backs. Even the “smaller” backs could give him some trouble. Guys like Saquon Barkley and Dalvin Cook are close to his size and love to run over defenders from time to time.

Despite the detractions, Owusu-Koramoah has impressive tools, and his instincts alone will make him successful at the next level. He is the best coverage linebacker in the class, and it will lead to a first-round selection in all likelihood. If you look up what teams want in a coverage linebacker, you find a picture of this guy.

Thursday, April 29, 2021 – Owusu-Koramoah should hear his name called to the podium, virtually or in-person. I don’t see him making it past the first round, but it will be very early Friday if he somehow does. Modern defenses need players with great instincts who excel in coverage, especially with linebackers. New offenses feature playmakers at tight end and receiving running backs more than ever, and Owusu-Koramoah would be a valuable asset.

As far as IDP and fantasy football, I struggle with putting a value on him because of how he will fit in the NFL. In your rookie drafts, he will be one of the first linebackers selected, and I am not sold that he will return what you look for with that draft spot. Owusu-Koramoah will be a valuable NFL player; he will get tackles, sacks, interceptions, forced turnovers. But I don’t see him producing on the level of your typical LB1s. I can’t see him raking in over 100 tackles and still being a force in pass coverage. His ceiling is more of an LB2 – 60-75 tackles, a few sacks, a few turnovers.

Jeremiah Owusu-Koramoah is a fun linebacker to scout; when you would watch the Irish play defense, he always stood out. He’s always around the ball and flies all over the field. It’s incredible to watch him work. Owusu-Koramoah will be an outstanding NFL defender for many years.

Thank you for taking the time to read my article. If you found any of the information in this article useful, give me a follow on Twitter @FFPeeblesChamp. More great pieces can be found on the Dynasty Nerds website, and don’t forget to subscribe to the DynastyGM. For the price of a cup of coffee, you can see how your team measures up against your league, find a trade partner, and more. Enjoy seamless integration with MFL, Fleaflicker, Sleeper, as well as manual input for other platforms.