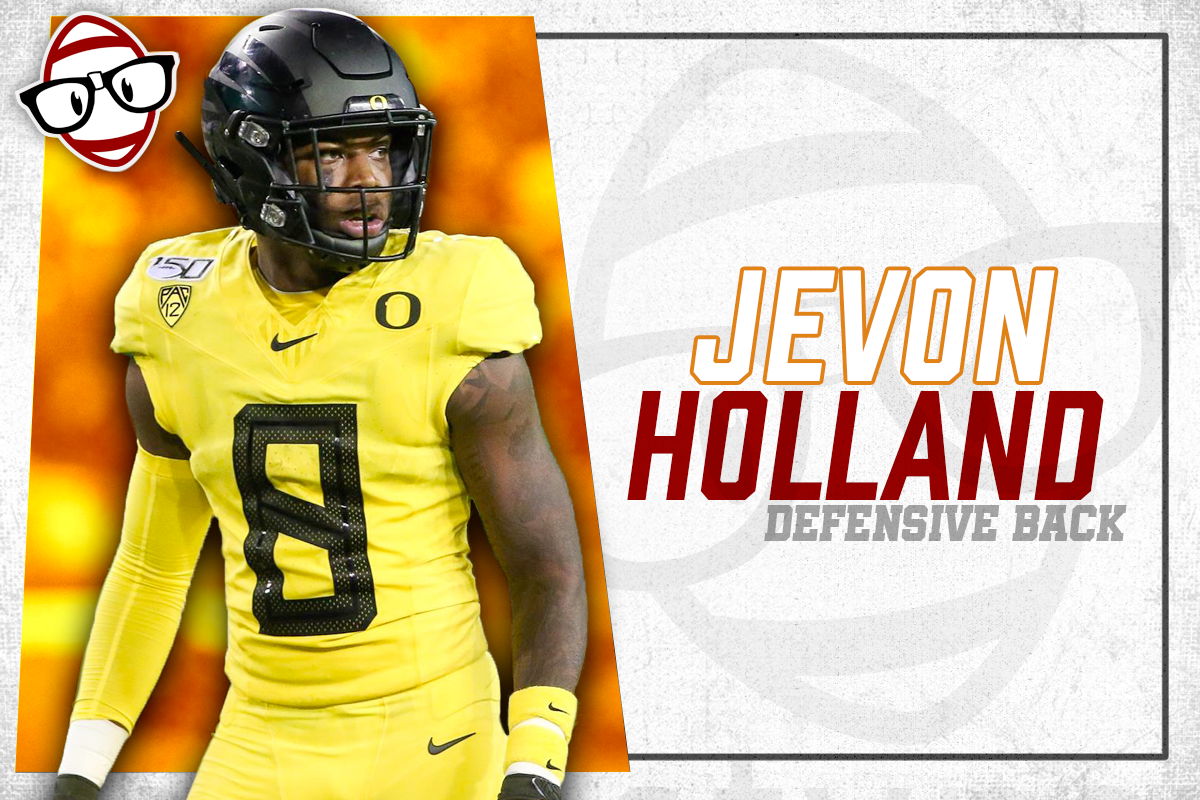 Jevon Holland comes in at your prototypical height and weight for a safety at 6’1” and about 200 lbs. Holland opted out of the 2020 season back on Sept 26th, after the Pac-12 announced their intention to return. Holland had a great sophomore year, finishing as a semifinalist for the Jim Thorpe Award and tied for the Pac-12 lead in interceptions.

Holland lined up all over the field for the Ducks in 2019. It wasn’t unusual to see him line up and come off the edge on first down, drop to the middle of the field on second down and then match up with a WR coming out of the slot on third down. He looked just as comfortable blitzing off the edge as he did playing man on a deep ball down the sideline. Holland also returned punts for the Ducks in 2019. He totaled 244 yards on 16 attempts, with one of those being a huge 81-yard return in the year’s opening games versus Auburn.

As I mentioned, Holland lined up in multiple spots on the field. His ability to play the run is a huge asset. He has shown great instincts crashing off the edge and his ability to tackle players in the open field consistently. Holland also excels at playing the ball in the air. QB’s better think twice about challenging him on a deep ball.

Despite all the things about Holland that I do love, there are a few areas of concern. Holland seems to lack elite top-end speed. However, he does look faster in the game than his 40 times suggest. Also, he tends to get swallowed up by the TE when he is coming off the edge. He’s not as consistently slippery as you’d hope he’d be.

I like the comparison of a lite version of Jabrill Peppers. I say lite because Holland can be a physical safety when called upon, but being overly physical doesn’t appear natural for him. Also, I feel Peppers is a bit more elusive in the punt return game.

Finally, the reason you’re here. I do feel Holland will be a solid contributor in an NFL secondary and on your dynasty team. He’s not going to score points for you like Budda Baker, but he does deserve a spot on your roster, and he will probably be a spot starter in your secondary. Plus, an NFL team might give him a shot to do some return work. I’m looking to take Jevon Holland as early as the fourth round in a rookie draft based on team needs, but I’d feel much better about a fifth-round selection.