Next up in our rookie profiles is wide receiver Jahmon Ausbon of Texas A&M. @TheHQNerd dives in a little closer to see what kind of sleeper possibility exists. 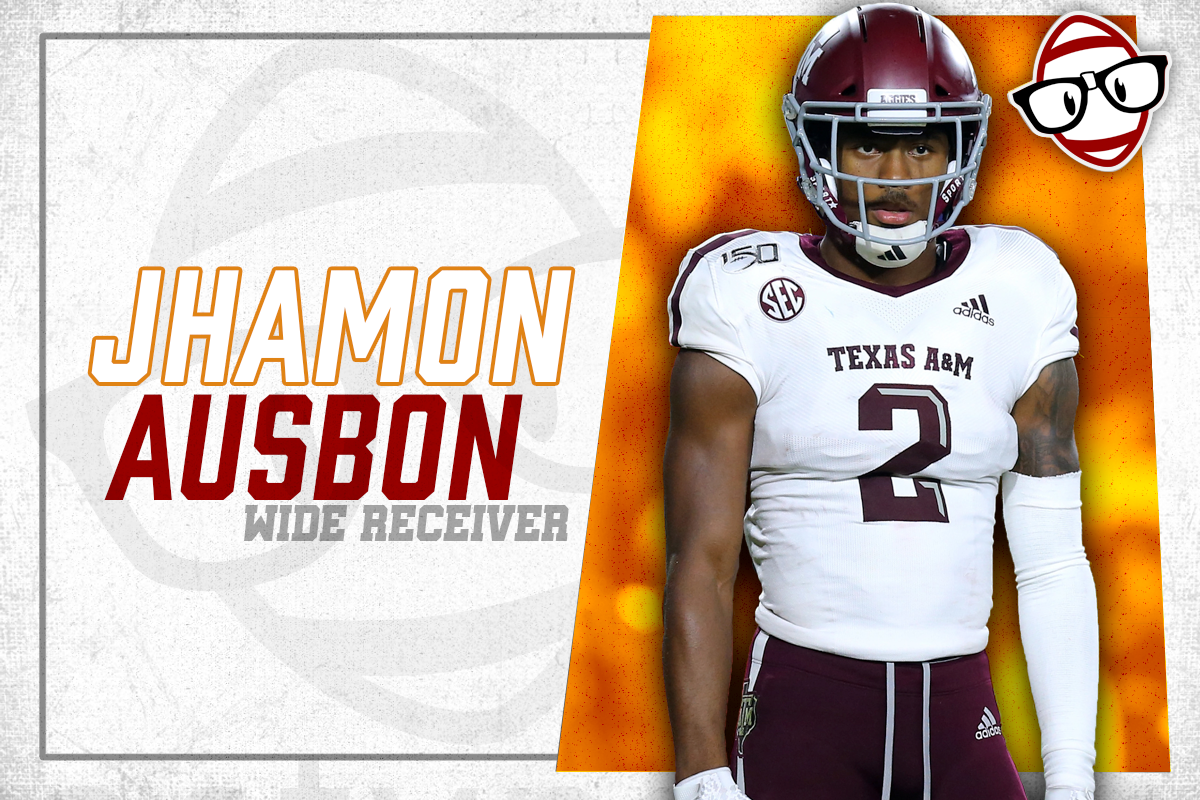 A Career at Texas A&M

Originally from Houston, Wide Receiver Jhamon Ausbon changed things up in his senior year of high school. Electing to transfer, he wound up playing for the famed IMG Academy, located in Florida. Then, at the end of his high school career, he became an Under Armour All-American.

Ausbon committed to Texas A&M as a highly touted four-star recruit immediately following his senior season at IMG Academy. He exploded onto the scene as a freshman. Ausbon managed to reel in 50 receptions equaling 571 yards receiving in year one. The script flipped on Ausbon in his sophomore year, though. Suffering an injury early on, he wouldn’t finish the season.

Ausbon decided to opt-out of the 2020 season and focus on the NFL Draft due to concerns over COVID-19. During his time at Texas A&M, Ausbon proved to be a reliable player totaling 147 receptions. He also finished with over 1,800 yards receiving in his three-year career.

Let’s take a closer look at some of Jhamon Ausbon’s strengths and weaknesses as a future NFL prospect.

Watching Ausbon’s tape, it became apparent very quickly how consistent his game was. He proved to be a reliable target for his roommate and quarterback, Kellen Mond. Ausbon did most of his damage in the middle of the field as he’s not the flashiest player. He is also a physical winner in the football field’s intermediate areas, not to mention his versatility. Oh, and don’t forget that he can play on the outside or in the slot. After watching him play, the slot looks to be where he’ll have the most success.

The trait that stands out the most when you watch Ausbon play is his steady hands. He doesn’t have the most extensive catch radius, but he certainly isn’t afraid to show that my-ball mentality. You won’t find Ausbon dropping many passes thrown his way. He constantly flashed reliable hands at various catch points on film.

Below, we see Ausbon show excellent body control to adjust to a ball thrown behind him. It’s a great indicator of what I discussed. It was and still is a ridiculous catch.

Players like Ausbon, who don’t have the most extraordinary top-end speed, have to find other ways to win on the football field. That area for Ausbon is his solid route running. He’s good in and out of breaks and consistently shows a variety of different route tree packages. Ausbon does this by utilizing efficient footwork. Often his quick feet help create the separation he needs to win on routes. Below is only one of several moments where you can see Ausbon’s route running and footwork on display.

While there are many weaknesses in his game, Ausbon is an intelligent player who knows what he excels at. He’s physical and reliable with great hands. Not afraid to handle the tough contested catches in traffic with solid hands at the catch point.

He’s versatile enough to play as an X outside or as the big slot. His lack of top-end speed and the ability to create consistent separation is a concern. That’s why he projects as a possession receiver in the NFL. There’s a chance Ausbon can stick on a team if he lands in the right spot.

From a dynasty perspective, we should temper our expectations. Ausbon should go near round five in SuperFlex rookie drafts. It’ll be an uphill battle for him to become anywhere near fantasy relevant. Ausbon is one of many players who may be a better actual real-life football player than a fantasy player.

2021 Rookie Profile: Talanoa Hufanga – Defensive Back
Logan Thomas: No Flash in the Pan