Ossai is another quick linebacker who can come off the edge and disrupt plays – where does he fit in this talented 2021 class? 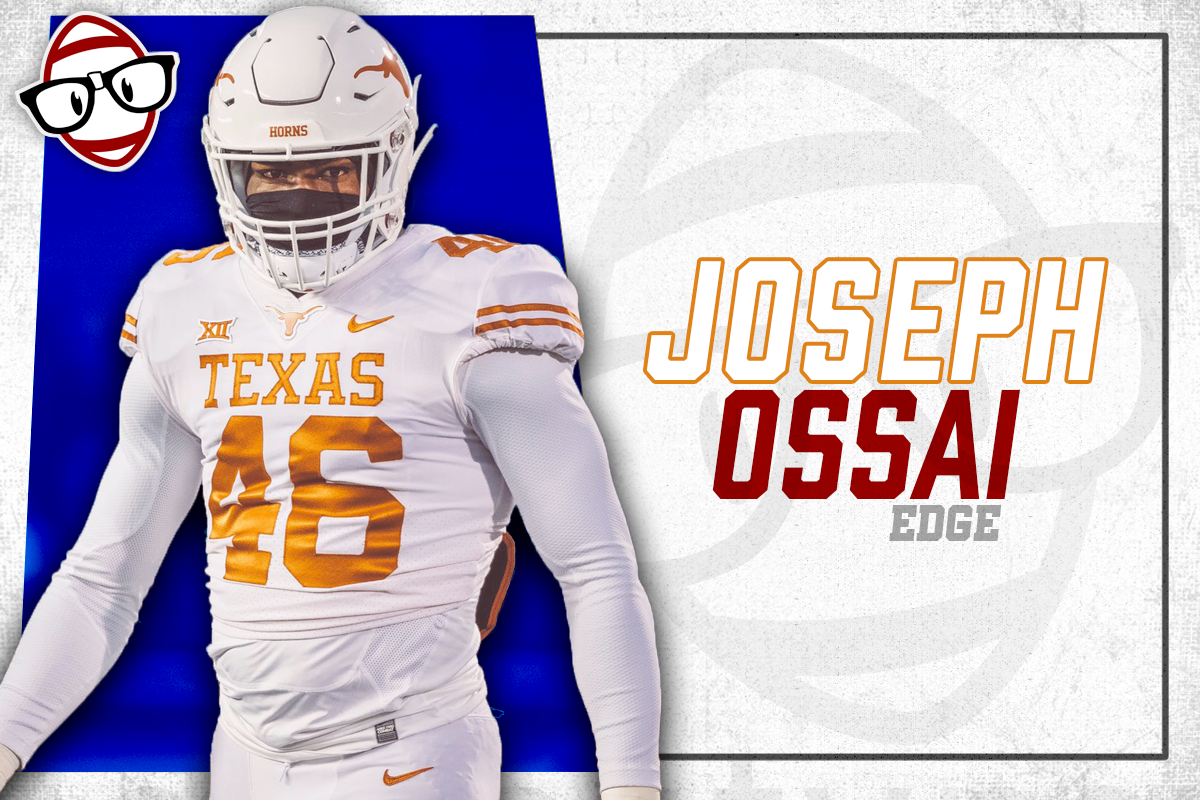 Joseph Ossai is another fast, rangy linebacker who can really get after quarterbacks in this deep 2021 draft class. He burst onto the scene in 2019 and has established himself over the past two seasons as a dominant EDGE defender.

Born in Nigeria, Ossai gravitated to other sports like track, soccer, and basketball. However, football quickly became his love, and he would begin to dominate. He finished his high school career as a four-star defensive end, which made him the 11th ranked player at his position. Ossai wound up receiving offers from top-end division one schools like Notre Dame, Alabama, and Oregon. Yet, he decided to commit to Texas and continue his football career there.

Ossai saw limited time as a freshman for Texas. However, in 2019 Ossai had a colossal season that put the linebacker on notice as a top prospect. He finished his sophomore campaign with 90 tackles, including 13.5 tackles for a loss. He also sacked opposing quarterbacks five times while having two interceptions. Although 2020 featured a shortened season, his numbers were equally as impressive. In four fewer games, he had 15.5 tackles for loss and another 5.5 sacks. Ossai also forced three fumbles and gave the Longhorns defense a much-needed playmaker.

Ossai has built his game on speed as he can cover a mass of land quickly. He plays with nearly reckless abandon, and his motor is never off. Not to mention, Ossai’s a sound tackler that has a knack for making disruptive plays at the right times.

There are many plays where it seemed like Ossai knew the snap count. The reason for that is how quickly he got off the line. The burst he has coming out of his stance is impressive, and it gets linemen off balance.

You can see Ossai bursts off the line so quickly here. Grabbing Ossai was all the lineman could do. He fights and carries his ‘block’ down the line to drop Chuba Hubbard in the backfield.

In this clip, you can see the quickness of Ossai’s first step. He gets on the outside of the lineman and displays his bend to get to the quarterback. It may not have been a sack, but it forced a rushed pass that led to an incompletion. Because Ossai’s so quick off the line, it gives him an advantage in many situations.

I coupled these traits together because they go hand-in-hand. Ossai has great speed paired with a relentless motor. It makes him a force to reckon with as he never gives up or takes a play off.

I love the effort on this play by Ossai. It looked like he was taken out by the lineman who engaged him. Ossai kind of stutters a little to lull the lineman on edge and then burst around the block, but he doesn’t give up. Ossai continues his pursuit and catches Oklahoma QB Spencer Rattler from behind after a short gain.

Here’s another excellent display of speed and effort by Ossai. He beats the lineman but gets pushed downfield, which puts him behind the quarterback. Ossai, realizing this, kicks on the speed and tackles the opposing QB while also forcing a fumble.

I had to watch this play several times to figure out how Ossai got the tackle! He gets blocked by one of the large members of the Oklahoma o-line and appears out of the play. Then Ossai weaves through defenders and blockers to track down the ball carrier. Five other guys should’ve made the tackle, but Ossai dragged Rattler down.

For as raw as Ossai, he’s an incredibly sound tackler. Even though his technique isn’t right, he wraps up and drops players frequently. Ossai rarely misses a tackle with less than ideal form and technique.

Both of these clips showcase several impressive tackles by Ossai. He’s strong, and the play ends as soon as he gets his arms on the ball carrier. The sheer amount of sacks and tackles for loss are evidence of Ossai’s brute strength. Even when he’s one on one downfield or in the backfield, Ossai wins many battles.

Ossai bounces around the field to different positions but needs refinement at each. He’s most suited as a 3-4 outside linebacker and needs time to focus on the nuances and techniques that come with the position. A team running a could 4-3 employ him as a weakside linebacker in that scheme. Still, Ossai would also need more time to learn. Ossai will need reps and a good coaching staff to assist him.

As far as pass-rushing moves, Ossai has only a few and needs to develop more. He relies on his first step and speed often. There is some bend as Ossai can get around the edge due to hip fluidity and speed. If he is engaged squarely by a lineman, it’s game over for Ossai. A few more moves and learning to utilize short-area quickness could make him more dangerous.

Tackling is a strong suit, but Ossai’s run defense will need to sharpen. His aggressive playstyle can lead to over-pursuit and poor angles. Things like that take Ossai out of running plays at times. This can expose opportunities for backs to cut back and gain chunks of yardage at the next level. He will need to be more disciplined with his assignments in run defense.

Ossai’s draft stock has steadily increased over the past two seasons, and he could see first-round draft capital. He’s raw but possesses the right size at 6’3″ and 250 pounds. Not to mention, Ossai has phenomenal athletic ability. He can move around the formation and has experience with his hand in the dirt. Ossai’s name should be called in the latter part of round one or possibly round two of the 2021 NFL Draft.

An NFL team will draft Ossai early, and he’ll be a productive defender at the next level. I am willing to take a shot on him in my rookie drafts, knowing he won’t provide consistent LB1 production. Ossai may be more valuable in leagues that give more points to big plays like sacks and turnovers. Ossai fits what teams look for in EDGE linebackers and will take time to develop into a role where we’ll see his ceiling.

As far as an IDP asset, Ossai will fit in the category of guys who are hard to start consistently. Players in the mold of Green Bay Packers LB Preston Smith. When they get a sack and a few tackles, it’ll help your lineup. However, if they don’t get a sack, they’ll only score a few points in a critical LB spot. Ossai could be a much better NFL player than an IDP asset. If his run discipline improves, Ossai may give you a safe tackle floor. He did have 90 tackles his sophomore season over 13 games, after all.

In an IDP rookie draft, the second round’s the sweet spot for Ossai. He’s gone in the middle of the second round in the three mock drafts I’ve participated in. That’s behind fellow linebacker prospects like Micah Parsons, Dylan Moses, Zaven Collins, Jeremiah Owusu-Koramoah, Chass Surratt, Nick Bolton, and Jabril Cox. There are a few other more versatile and “safer” options in the class than Ossai.