Louisiana-Monroe RB Josh Johnson presents an interesting prospect in the upcoming NFL draft. @ReflipeWThenuz breaks down the player and his stock. 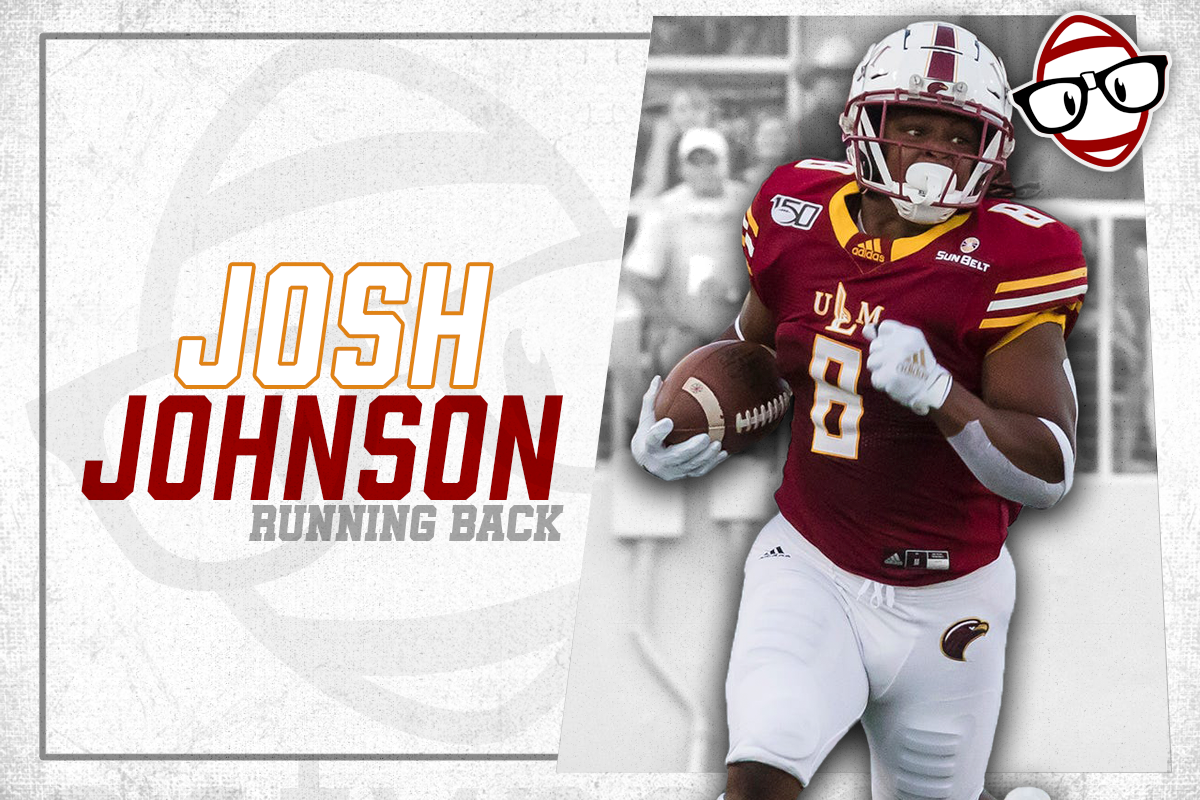 When it comes to our Dynasty rosters, it’s hard to remember that not all players are top-12 options in competitive leagues. Well-rounded rosters have RB1s, RB2s, and RB3s. Oftentimes, third-down backs can bring excellent bang for their buck on your rosters. Players like Duke Johnson, Tarik Cohen, James White, and Nyheim Hines have all enjoyed RB2 or better seasons in recent memory. Looking at the 2021 draft class, Josh Johnson appears to be this type of back. The diminutive dynamo left an impression on the Sun Belt conference and is primed to fill a role on an NFL team this fall.

Johnson played his High School Football at Opelika High School in Opelika, Alabama. He was lightly recruited out of high school, coming in ranked as the 135th-ranked RB in the nation by 247sports.

Johnson was forced to prove his worth in the JuCo ranks before getting his shot at a 4-year program. In his one year at Coahoma Community College, Johnson proved his worth finishing fifth in rushing yards per game in the NJCCA as well as being named his team’s offensive MVP. This one year was enough to grab the attention of the Warhawks who brought him in.

Johnson spent a relatively quiet first year on the field at the University of Louisiana Monroe. He was slowly brought into the offensive fold, making six appearances and playing a role on special teams. However, heading into this redshirt junior season, the seas parted for Johnson and he was given an opportunity. He responded with an outstanding year which saw him earn Second Team All-Sun Belt honors among other accolades.

Like many players, Josh Johnson endured a frustrating 2020 season. By far, his team was the worst in the Sun Belt and he personally suffered through injury. These factors, combined with all teams’ covid restrictions, led to a disappointing final year in the college ranks. Despite the disappointing finish, Johnson has put some interesting work on film. He will certainly garner some interest from NFL teams in the coming draft. Without further ado let us take a look at some of his film.

One of the first things I noticed when digging into Johnson’s film was the power and quickness he plays with. Somewhat reminiscent of Ray Rice, he uses his short stature to his advantage. While certainly not a track star, he has nice quickness and can break through arm tackles picking up extra yards.

Another area where Johnson makes excellent use of his short stature is in his pass blocking. Numerous times, I saw him use his height for leverage in pass blocking stonewalling much larger players. You can find a couple of examples of this below.

While his pass blocking is an asset, he is also an adept receiver out of the backfield. This was not an area of his game that the Warhawks chose to make extensive use of. On the occasions when they did, he accounted nicely for himself. Notice the nice catch on the wheel route in the first clip below.

While I feel that Johnson will have a home on an NFL team, some aspects of his game need to be addressed. I picked on one area when watching his tape because occasionally he does not switch the ball to his outside arm when breaking into the open field. At the next level, defensive players will make every effort to strip the ball away. You can see an example of this below.

Johnson is a nice role player prospect, but his size and overall athleticism mean it will be extremely difficult to be a starting RB in the NFL. That is not to suggest that his size and athleticism are a deal-breaker. As was pointed out on his Twitter page, players with almost identical athletic profiles have succeeded in the NFL before.

In conclusion, Josh Johnson is not likely to ever be an RB1 for your dynasty teams. However, that does not mean he cannot be a valuable contributor depending on where he ends up following the 2021 NFL draft. He is a wonderful young man whose college coach Matt Viator described as, “a complete football player who can run with power between the tackles combined with breakaway speed to take the ball to the endzone every time he touches the football…”

Our very own Jared Wackerly, Nick Whalen, and Garret Price sat down with Josh Johnson to break down some of his film. It is a wonderful insight into the type of athlete and young man this talented player truly is. Check that out once you are done with this breakdown and keep an eye on how he fares in the draft process. You could do far worse than targeting a player like this late in your rookie drafts.