Gage Bridgford (@GbridgfordNFL) looks at one of the top wide receivers in this year’s draft in Florida’s Kadarius Toney. 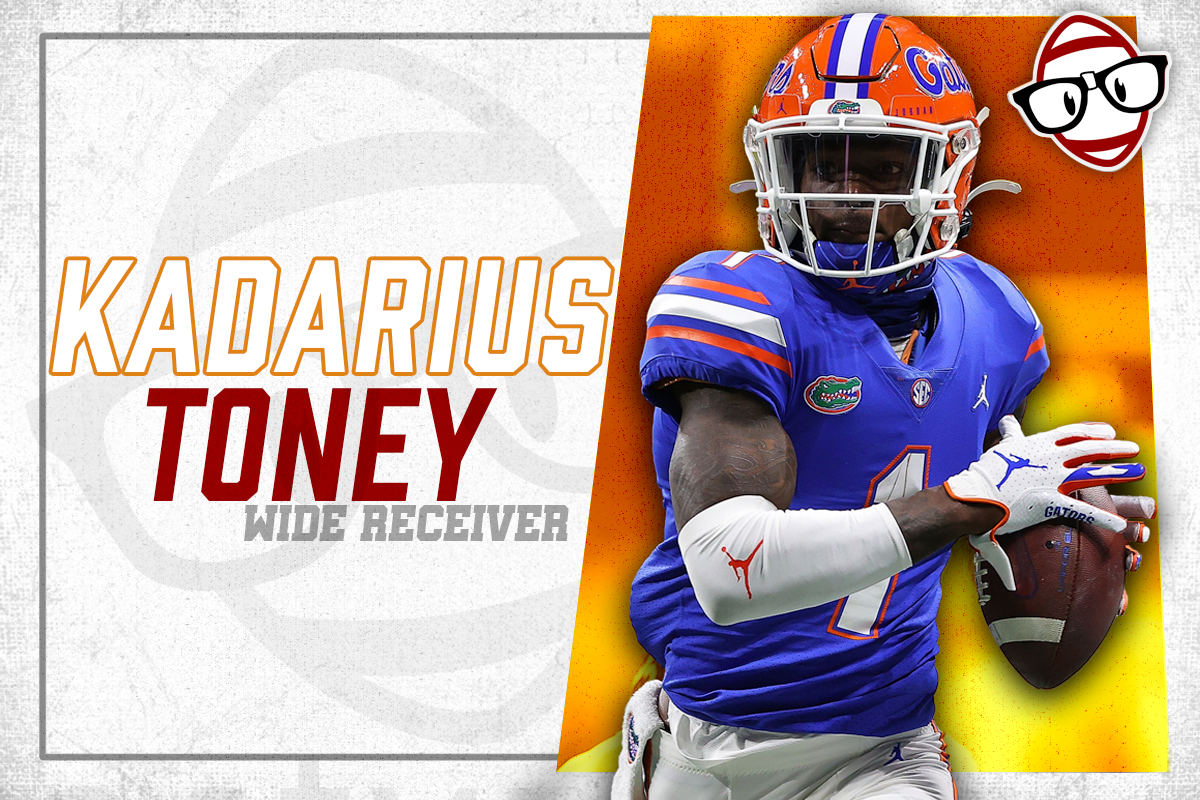 Well, this is a pretty impressive transition for Kadarius Toney. After being a three-star recruit out of Prichard, Alabama, he’s turned a successful Senior season into a good chance of being drafted in the first round of the 2021 NFL draft. A two-sport athlete playing football and running track, he was a quarterback before coming to Florida as an athlete while they tried to figure out how to get the most out of him.

Toney had just eight recruiting offers out of high school. Some were high profile such as Alabama and Auburn, but he was also seeing offers from places like Troy and South Alabama. Florida ultimately won out, and, while it was a slow burn, it has finally clicked for him. After totaling just 50 receptions for 606 receiving yards through his first three seasons, he caught 70 balls for 984 yards in his final season.

He’s going to have a couple of questions to answer in this pre-draft cycle. For one, he missed games in his freshman and junior seasons with various injuries. They don’t seem to be long-term concerns, but they will be looked at heavily. He also will have to answer for being pulled over in 2018 with a loaded AR-15 in the backseat. He was not arrested for the incident, and the rifle was registered in his name. However, teams will want every single detail they can find before investing a premium draft pick in him.

Wherever Toney gets drafted, it’s going to be based on his Senior-year production. In his first three seasons, he had a total of 1,025 yards and three touchdowns. In his final season alone, he had 1,145 yards and 11 touchdowns. He went from being a seldom-used gadget player to his team’s leading pass-catcher in every area other than touchdowns, which was lead by likely first-round pick tight end Kyle Pitts.

Toney went from averaging a touchdown every 32.3 touches down to one every 8.1 touches. It wasn’t the same as Heisman winner Devonta Smith, who was averaging a score every 5.04 touches, but that was an impressive rate nonetheless for a guy that wasn’t catching exclusively deep balls.

Toney is the perfect player for teams that are looking for a guy with a versatile skillset. He has 66 carries in his career to go with his 120 receptions. However, he’s not a gadget player like Tavon Austin was drafted to be out of college. He’s going to work best in a system that maximizes the variety of things that he can do. Don’t force him to always run or play the wildcat, but don’t force him to only line up as a wideout. He can do it all, and he just proved it for four years.

Toney may not be the fastest receiver in this class, but that doesn’t mean that he doesn’t have the speed to dust opposing defenders. On this play, while matched up with Malachi Moore, who was a second-team All-SEC cornerback, he just runs right past him. He sells his move to the sideline, and he immediately starts up the field and Moore has no chance. Kyle Trask puts it on him, and that’s an easy seven points.

I’ve watched this play at least 15 times in the last two days. I’m still not sure how Toney scored. First, Toney annihilates a linebacker on the route. He fakes the out, and the linebacker nearly slips off the frame. After catching the ball, he has six defenders converging on him. He breaks three different tackles and waltzes into the end zone. Players his size aren’t supposed to be able to do that, but he runs with a different level of determination for a player his size.

We’re not trying to pick on Moore today, but Toney was picking on him in the SEC championship game. Toney lines up in the backfield on this play, and Moore is tasked with picking him up in coverage. Due to Toney’s speed, Moore has to honor him going out into the flat, and, once Toney gets his hips turned, he gets inside Moore and works up the field to give his quarterback space to get the ball in before fighting down to the one-yard line.

This reminds me of someone…

This is the play that gave me Tyreek Hill vibes from him. In the last three years, how many times have we seen Patrick Mahomes floating backward in the pocket and just flick the ball with his wrist down the field only for Hill to just find space and run underneath the ball? That’s what Toney does for Trask does on this play. Three different defenders are near him, but he finds space and makes a play happen for his quarterback. This isn’t comping him to Hill, but he does have the athleticism and awareness to find space and make a play for his quarterback.

Toney is never going to be the dominant, traditional X receiver that has been in the NFL since the beginning of time. However, he can be the modern, hybrid receiver that has grown in popularity over the last several years.

During his time at Florida, he showed the ability to line up all over the formation. In one game alone, he lined up out wide, in the slot, in the backfield, and behind the offensive tackle. The key for him at the next level will be going to an offense that doesn’t try to pigeon-hole him into one specific role. He’s not a gadget player, but he can provide production in a variety of ways. He’s not Tyreek Hill, but he plays with a similar level of confidence that he can always make a play happen when there’s seemingly nothing there. With his athleticism, it makes sense that he has that confidence. It will be interesting to see where he is drafted. He could easily become a contributor in year one under the right coaching staff.