Highly recruited. Highly productive. Is it possible we are overlooking Mond the way we overlooked Dak? 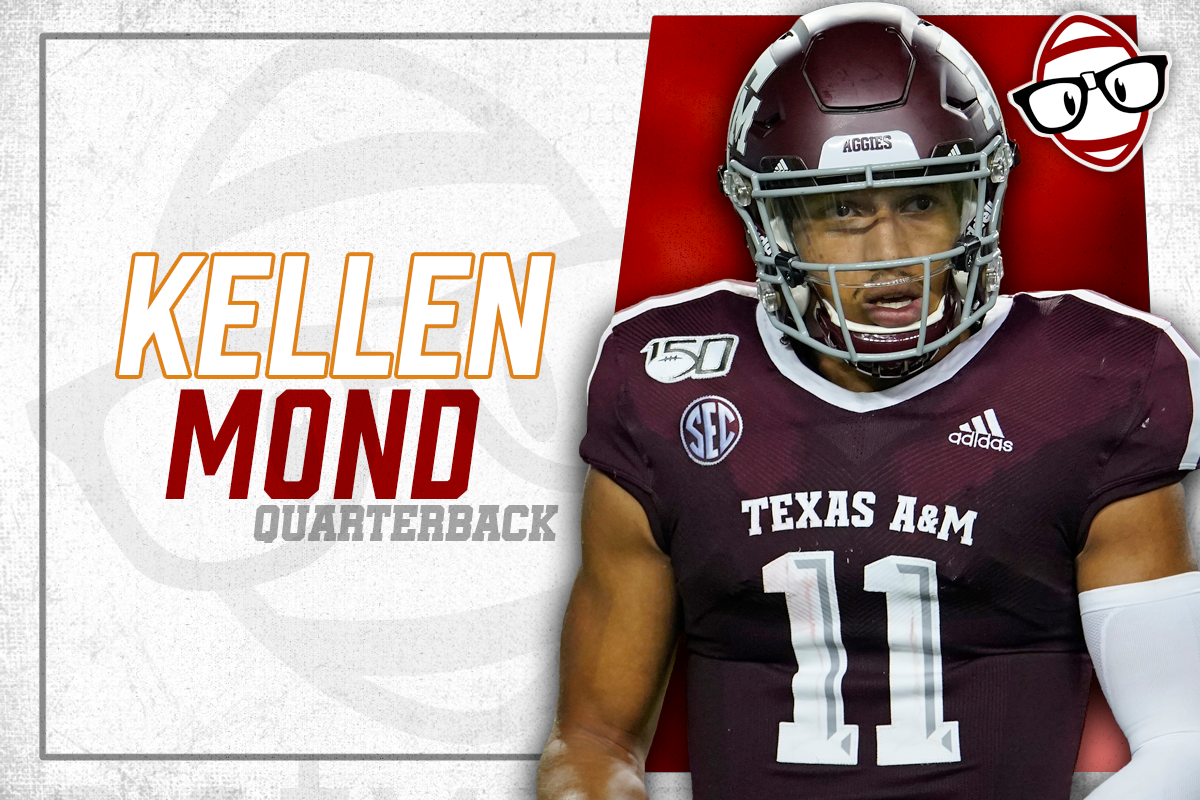 As a four-star dual-threat QB out of Texas and Florida, Mond was recruited to Texas A&M to fill the College Station QB void after Kyler Murray jumped to Oklahoma. He would compete with, and eventually beat out, Nick Starkel for the job. While Mond would have his share of struggles as a freshman passer, it was evident early that he had the tools to grow as a player.

Three seasons and 36 starts later, Mond has surpassed former Texas A&M QB Johnny Manziel in every significant statistical category and is one of three SEC quarterbacks to ever throw for 9,000 and rush for 1,500 career yards. The other two players to accomplish this? Tim Tebow and Dak Prescott.

Mond also has a track record for winning, going 26-10 and 3-0 in bowl games since his freshman season. While disappointed to be left out of the 2020 CFB Playoff, Mond led Texas A&M to an Orange Bowl victory and eventual #4 AP ranking.

The 2021 QB class has a chance to be a historical group. While overlooked initially, Mond has been gaining steam throughout the 2020 season. The Aggies victories vs. UNC and Florida, along with Mond’s MVP performance in the Reese’s Senior Bowl, have contributed to his rise up boards. As my current QB7 in the 2021 class, Mond has taken steps to transition from a dual-threat QB to a more refined pocket passer. While concerns still exist, Mond consistently improved his season-to-season accuracy at A&M.

When evaluating prospects, perfection cannot be the goal. Tell me what the player CAN do.  Furthermore, give me a player with experience and a proven track record of improvement, and I’ll show you a player NFL scouts and coaches will value. Kellen Mond has these markers in spades. Let’s look at the improved mechanics and accuracy and evaluate where Mond still needs refinement for the next level.

While no video is explicitly provided for this, keep this trait in mind as we go throughout Mond’s film. Primarily operating in 2020 as a distributor, Mond and A&M’s offensive scheme focused on stressing the defense in the short and intermediate areas. It’s in these plays where his quick release shines.

In the coming clips, you will also see a QB who keeps two hands securely on the football throughout his drop and while maneuvering in the pocket. You will see a player who doesn’t double-clutch, pat the ball, or in any way tip-off defenders when a throw is imminent. The actual throwing motion does look a bit mechanical but is consistently repeated throughout his film. Mond should look to narrow his base slightly to improve weight transfer and ball velocity, but in total, a quick, efficient and repeatable delivery.

Deep and Outside Touch

Despite lacking upper echelon arm strength, Mond has a professional touch and accuracy on his deeper and sideline throws. Lacking any premier deep and outside threats, the necessity for accuracy on these throws was compounded in 2020. Mond met this challenge more often than his receivers were able to capitalize on and showed good ball placement along the sidelines and red-zone areas.

Another example of a touch throw, beating the safety on the “hole shot” vs. Cover-2. Excellent layered throw, and notice the time taken from Mond recognizing the coverage to releasing the football.

Eight defenders drop into coverage here, and Mond and TE Jalen Wydermyer successfully convert 3rd and long. The timing here is excellent, thrown into a small window. If I were to nit-pick, you’d like to see Mond put this throw in a spot that forced his best offensive weapon to the ground before taking a big hit.

This was the most impressive throw made by any QB who played in the 2021 Senior Bowl. Marginal window, but a perfectly timed rope between two defenders. Credit Amari Rodgers with a great catch as well.

I left the corresponding two-point conversion at the end of this clip. It will show Mond’s average, but still present, athletic ability. Mond may have come into A&M as a runner, but despite this nice shake, if he’s to succeed in the NFL, this type of play will be his change-up, not his fastball.

There are two plays included in this clip. The first throw shown here is an incorrect read. Ainias Smith is open on the jerk route; Mond doesn’t recognize the blitz fast enough and forces it to the TE. The second throw, the next play, shows a player beginning to solve a defensive agenda within the game. Mond shows a willingness on this drive, and repeatedly throughout my film work, to hang in the pocket against the blitz and make a tough throw. As he continues to learn, his ability to identify the free rusher and make quicker decisions will become more consistent.

It is again important to note that the general response college QBs have to the blitz is to take a deep shot. Mond mostly lacked the outside athletes to make this a reliable option in 2020 and was forced to beat the blitz in less conventional ways. This skill will serve him well at the NFL level, where winning against free defenders relies more on getting the ball quickly to a play-maker in space.

The glaring red flag that I did find within my Kellen Mond film study was anticipation. Out-breaking routes, thrown far too late. Notice on this play how wide open Ainias Smith is. Also, notice that the Gator’s right defensive end (#7) is inches away from a strip-sack as Mond releases the ball. At the NFL level, a rusher with better bend and speed assuredly gets home. Most college QBs prefer to see players running open, and Mond is no different. The NFL will ask QBs to throw to open areas they anticipate receivers to be eventually. Mond learning to recognize defensive coverages and anticipate these throws more quickly will be the next step in his progression as a passer.

As a collegiate prospect, I think Kellen Mond shares many similarities with Dak Prescott and Russell Wilson. All three QBs were four-year starters in college. All three were highly successful, both early on and throughout their career, at the collegiate level. Dak and Russell were both drafted beyond the 2nd round of the NFL draft, a fate that I suspect Kellen Mond will share.

While I have empathy for any talented player being disregarded in their respective draft class, I also think we have seen the benefits of falling on draft day on both players’ careers. Both were talented players who had to earn their place within the organization. Either elite offensive lines or defenses fostered both player’s early development. Neither needed to play outside of their abilities in their early careers. It is in this way that I think Mond will succeed.

We are seeing a changing of the guard at QB league-wide in the NFL. While everyone chases Deshaun Watson and top-4 NFL draft picks, it’s important to remember that not every team is going to be able to get “their guy.” Kellen Mond will be a perfect fit for the myriad of very competitive teams that may swing and miss in the QB market. A couple of organizations that could fall into this category are the; New Orleans Saints, San Francisco 49ers, Denver Broncos, Pittsburgh Steelers, New York Giants, and Chicago Bears.

An NFL team may value Mond’s collegiate experience as a backup quarterback. Still, I believe Mond deserves and will be drafted into a situation where he will be viewed as a potential starter. For this reason, I don’t see his dynasty value in a significantly different way than fellow rookie prospects Mac Jones and Kyle Trask. I believe both Trask and Jones will likely fall into similar scenarios, where they are eventual, but not immediate, starters. This prospect profile makes all three viable selections in the late-1st/early-2nd round of Superflex drafts.

The compelling case for Mond in dynasty is that he is not valued by the community anywhere near the ‘Bama and Florida products. In the most recent Nerds Superflex Mock, Kyle Trask went at 2.05, and five QBs went in the first round. Kellen Mond was undrafted through three rounds. This value may change as the pre-draft process begins to churn. Despite this, I believe you will still get a significant bargain on the A&M product come May. I will become wildly bullish if he can land in one of these situations, like New Orleans or San Francisco, with innovative coaches and excellent offensive lines.

Dig deeper into rookie prospects with a #NerdHerd membership. For the price of a cup of coffee a month, you can see the four Kellen Mond film cut-ups yourself, plus get access to the best rankings in the business, and explore the revolutionary #DynastyGM tool. For more prospect breakdowns, check out the 2021 Rookie Profiles from our excellent #NerdsStaff!