Need a deep sleeper to look for in the 2021 draft? Woo Lee (@WooLee_FFB) takes a look into one of his favorite late-round fantasy draft picks: Kenny Yeboah. In this article, Woo analyzes why Yeboah can be a diamond in the rough for many teams looking for a tight end. 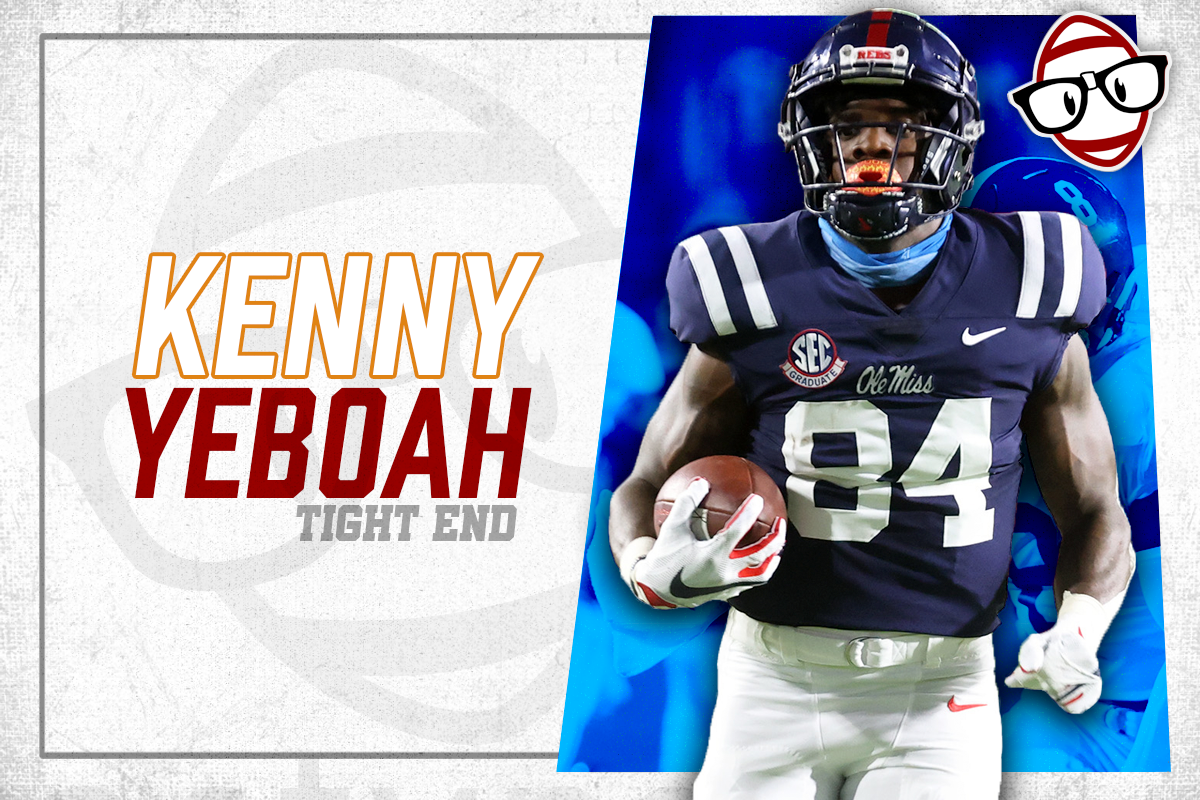 For his last year as a senior, Yeboah wanted to transfer to Baylor. Yeboah originally decided to transfer to Baylor but changed his decision to transfer to Ole Miss when Carolina Panthers hired coach Matt Rhule to be their next head coach. Though Yeboah denied that Coach Rhule being hired by the Carolina Panthers had any impact on his decision to transfer to Ole Miss. The 6 foot 4, 240-pound tight end from Ole Miss finished second in receiving, only behind Elijah Moore. The senior year tight end finished with 27 receptions with 524 yards, along with 6 TDs. Yeboah clearly had his best year last year with Ole Miss despite only playing seven games.

Yeboah’s strength as a tight end is his receiving ability. Yeboah finishing as the second best receiver in Ole Miss speaks volumes on how he was involved as a weapon in Ole Miss during the 2020 season.

Diving deeper into Yeboah’s film, it is seen that he was heavily a part of Ole Miss’s offense. He was utilized both as a blocker and a receiver. He was used as a blocker on the line, and he does a great job to help seal the outside for a large gain.

Yeboah was also utilized as a lead blocker. He does a great job initializing the contact and then creating a hole for the runner.

Yeboah was also used heavily in the receiving game as well. Analytics show Yeboah as a big play tight end, and it is easy to mistake Yeboah more of a vertical threat tight end. Watching film, this is not the case, Yeboah made his big plays with his speed from short passes and seams.

Yeboah is a good overall tight end. He knows how to block and be a receiving threat. Although many analysts will hesitate to put Yeboah up there with the top 5 projected tight ends in this upcoming NFL draft, Yeboah makes his case as a top 10 tight end conversation. Yeboah needs improvement in his pass protection and sometimes his blocking IQ but can be a productive tight end. This makes a developmental prospect, which is not so great for his draft capital. The talent is there, but the opportunity may not.

In 2021 rookie drafts, Yeboah is mainly going undrafted or going in 4+ rounds. Depending on his draft location and capital, Yeboah is someone I will be looking at during those later rounds as a dart throw or stash. He has the skill set to be a productive fantasy tight end. His speed and ability to run after the catch are valuable for fantasy production given he is in the right situation. He needs improvement in his blocking and pass protection and needs to be in the right situation to stay on the field. Overall, Yeboah can develop into someone like Jonnu Smith and could someday be a valuable asset in the future for fantasy managers looking to take a chance at the tight end position.

Put me in coach: 2nd year RB’s to stash
Fantasy Impact: 49ers, Dolphins, and Eagles making moves early in the 1st round