Khalil Herbert had a breakout season in 2020. Does he have what it takes to succeed in the NFL? @DevyCramps is here to tell you. 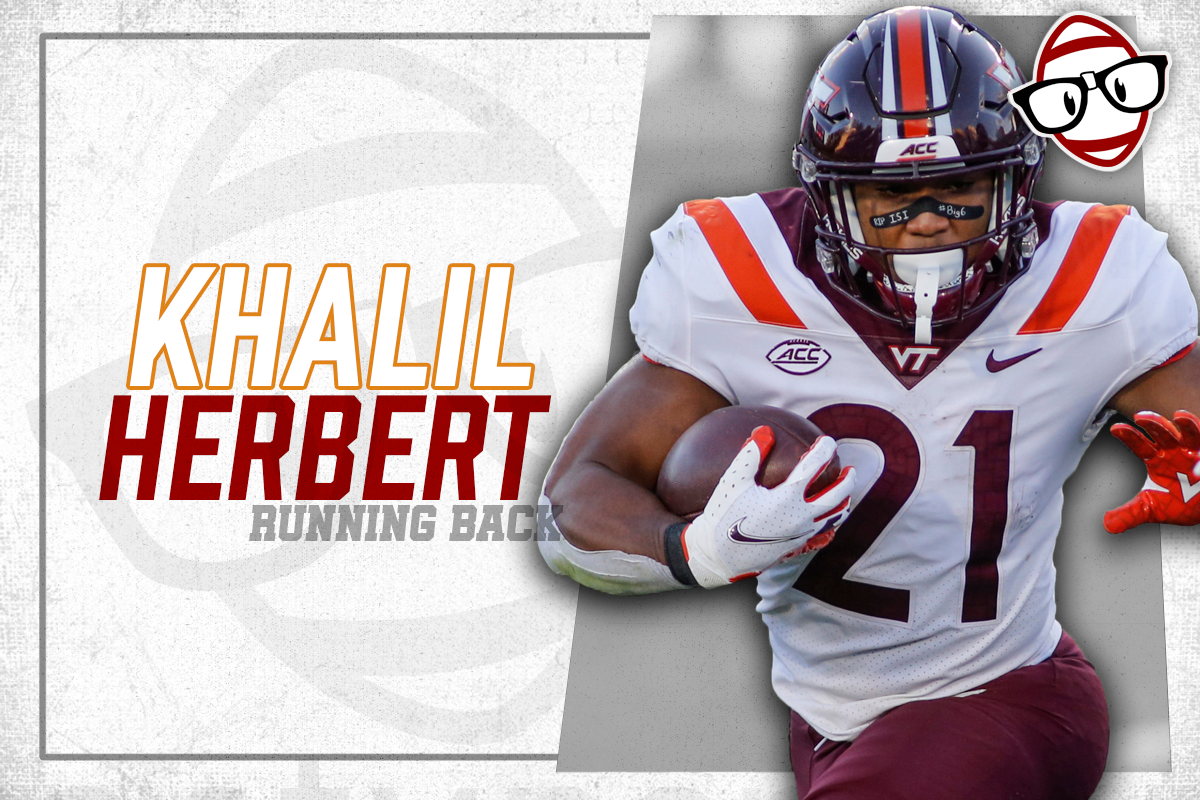 A 3-star prospect out of Fort Lauderdale, Khalil Herbert had a flashy but inconsistent 4 years at Kansas. He never managed to earn a stranglehold on the starting job, often ceding touches to other backs like Pooka Williams. There were flashes of explosiveness, such as consecutive games in his sophomore year in which he compiled 451 scrimmage yards and 4 TDs, or his 187 yards on just 11 carries against Boston College last year.

He then transferred to Virginia Tech in 2020, where he broke out by leading the ACC in all-purpose yards (1,792). Herbert averaged 7.6 yards per carry behind Virginia Tech’s dominant offensive line, the sixth most prolific rushing team in the country. He tallied at least 100 scrimmage yards in 8 of his 10 full games. So, was his success a product of his offensive line, or did Khalil really earn those yards? Let’s find out.

Herbert’s patience and vision are among his best traits. He does a fantastic job of running behind his blockers, letting plays develop, and finding the right hole. He also displays the vision to manipulate second-level defenders while he’s still in the backfield.

In this play, he sees #9 coming downhill towards the C gap. Herbert turns upfield to get the defender to commit to the gap before cutting back outside and using his burst to win around the edge.

Here, he patiently watches his blocks develop before bursting upfield, only needing 2 steps to switch from facing the sideline to facing the line of scrimmage. Then, he shows off his long speed and open-field vision to take it to the house.

His footwork is another excellent aspect of his game. His ability to make subtle, efficient cuts to switch directions keeps defenders guessing. It makes it tough for tacklers to get an angle on him.

And despite his inconsistent results in pass protection, he did show a willingness and flash some capability on that end.

Borland has 4 inches and 25 pounds on Herbert. pic.twitter.com/bmgvlelCbQ

This physicality comes through with the ball in his hands, too! Despite his small frame, he shows a nice ability to keep his legs churning and find a few extra yards after contact.

Patience, vision, footwork, speed, physicality – there is a lot to like about Herbert. On top of all that, he provides value in the return game, as he gained 430 yards on 16 kick returns in 2020 (26.9 average). However, there are undoubtedly some downsides to his game that limit his upside.

Khalil only had 34 receptions in 5 years in college, with a few drops in that span. He did not provide any reason for us to believe he can be a weapon in the passing game. He weighed in at 204 lbs at the Senior Bowl – making it difficult to project him as a 3-down, workhorse back in the league.

Additionally, he is not a plus athlete by NFL standards and did not flash much to create his own opportunities when plays break down. He needs a good support system around him to succeed. As you can see here, he gets hesitant and jumpy when he can’t find a hole. Herbert is brought down easily when he doesn’t have momentum on his side.

There is a lot to like about Khalil Herbert’s game, but his limitations have to be considered. It is hard to see him being a workhorse back in the league, given his size and unproven ability on passing downs. On top of that, his production profile is not ideal; it took him until his 5th year in college to breakout. He did it behind one of the better offensive lines in the nation in 2020. Herbert played himself into being a Day 3 draft selection this year, but he remains one of the most draft capital and landing spot-dependent RBs in the class.

Herbert is at his best behind an effective outside zone-based blocking scheme. His ability to find the hole, make quick cuts, and turn upfield is impressive. The vision and long speed make him dangerous in the open field. Should he land in a good spot, he is definitely someone to watch out for in the 4th round of rookie drafts.

A lot of Herbert’s game reminds me of Raheem Mostert. He is not quite as fast but still has good speed, and his vision, footwork, and contact balance are similar. I see 2019 Raheem Mostert production as Herbert’s upside; the 1a in a committee who doesn’t receive much passing work but is efficient enough behind a good line to be a strong flex play or low RB2. On the flip side, he could remain a career backup if he gets drafted in the last couple of rounds. All that said, I will still be targeting him in the last 2 rounds of a lot of rookie drafts.