Kwity Paye had limited production in college but has the tools to be a valuable EDGE rusher in the NFL. @FFPeeblesChamp breaks down how he can be successful. 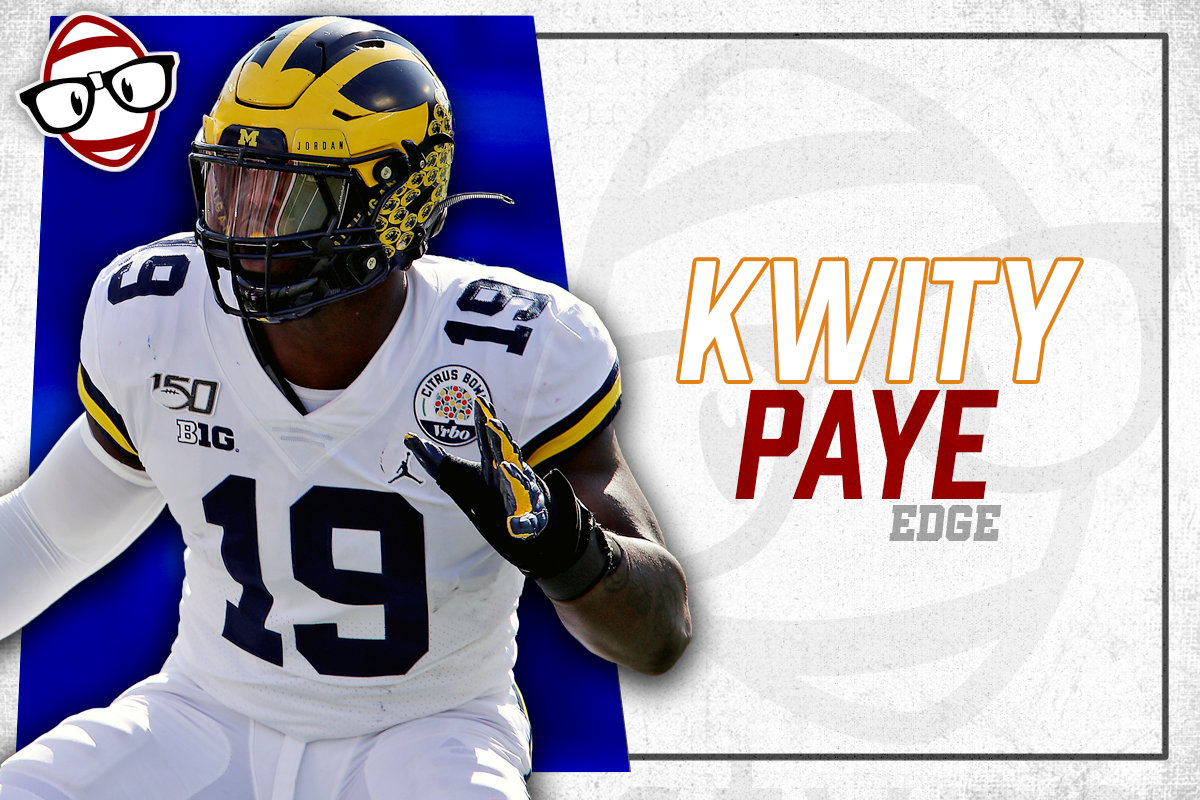 Before the 2020 season started, Pro Football Network’s Bruce Feldman published a Freaks List. Michigan’s Kwity Paye was one of the players highlighted due to his insane speed and size combination. The numbers Paye is projected to post at the Combine would have put him in rare company. Unfortunately, we won’t see a combine, but all eyes will be on the defensive end March 26 – Michigan’s Pro Day.

Paye’s background story is phenomenal and points to his strength and determination through adversity. He was born in Guinea and spent time in a refugee camp to avoid a civil war. Eventually, his family settled in Rhode Island and attended Bishop Hendricksen High School. He ran on the track team and won the state long jump title as a junior, another testament to his athletic ability.

Paye was a three-star athlete in the class of 2017 and initially committed to Boston College. When Don Brown took the defensive coordinator position at Michigan, Paye followed the coach to Ann Arbor.

Paye played sparingly in his freshman season and started to emerge his sophomore season. He had a pair of sacks and 27 tackles as he garnered more playing time. 2019 was his junior season, and he had his best statistical season. Paye had 50 tackles, 12.5 for a loss, and 6.5 sacks as he played a majority of Michigan’s defensive snaps.

Even though he only played in four games this past season, he had 16 tackles with four tackles for a loss and a pair of sacks. Paye was never a dominant statistical player but had some substantial numbers over his career.

At 6’4″ and 275 pounds, Paye has nearly ideal size for a defensive end. He attacks linemen low, using massive legs and a thick waist to convert the low center of gravity to power. He gets under linemen and can get around the corner with speed, one of his best moves. If a lineman tries to anticipate the move, he can counter inside and create push inside.

Paye is incredibly strong due to his base, but his hands and arms are impressive as well. He doesn’t get knocked backward often, and if he is engaged, his arms and hands can shed blockers. His game is predicated on power, he’s scary strong, and it shows on film.

Zach Gartin has a phenomenal thread on Paye, and the first video showcases the quick, strong hands as Paye quickly slaps away the lineman en route to leveling the QB. It’s so quick, and the tackle didn’t have a chance.

Even if he is engaged, Paye can still muscle most lineman where he needs them to make plays. Here he pushes the tackle nearly back into the runner before peeling off and making the tackle.

Against the Iowa offensive line in 2019, he tallied 2.5 sacks. Iowa typically has one of the best lines in football. On this play, Paye slips inside the tackle and muscles through the guard. Strength and relentless effort lead to a big sack.

Michigan used Paye all over the line as his size allows him to plug inside if needed. He can handle lineman and hold his assignment if double-teamed. His motor is ridiculous, and his fight allows a defensive to use him anywhere on the line. Paye never gives up on a play, and he has enough speed to track down plays from behind.

I think he is more suited to the end, but Paye could be used on the interior in a 4-3 as well. He has solid move insides, like this play, and his speed can easily overwhelm guards.

Paye is also smart inside; in this play, he stays with the play’s flow and fights with several linemen. He slides and disrupts the screen as it’s developing, where it’s ultimately snuffed out for a loss.

We will see the speed and agility at his pro day; he moves well for a guy of his size. He converts his power to speed and has enough flexibility to counter moves quickly.

This play showcases how quickly he accelerates, and the tackle is waiting for him to bull rush. Paye dips inside and explodes to the QB. His acceleration is sudden, and he covers ground fast.

I had to watch this play several times; I couldn’t believe Paye made the play from where he started. Engaged and taken out of the pass rush, he crosses the field to hammer the running back as he’s trying to cut back toward the middle of the field. The speed with his motor is an incredibly dangerous tandem.

Paye has strength and speed but doesn’t possess a vast array of moves in his arsenal. If he is engaged and can’t shed the block with power, he is limited. He will need to work on counters and using his muscular arms for more than power. Developing a swim move could take him to another level as a pass rusher.

While his power to speed rush outside is good, it can sometimes push him out of plays. A tackle can use it to make him beyond the pocket. Paye has some bend, but his frame can be a bit stiff too. His build with the strength in the middle and lower half can be rigid and inflexible.

I love how low he plays, but it’s not consistent. On some plays, he gets caught standing too upright, and linemen can control him.

Paye’s athletic traits mixed with his size and speed will likely see him drafted in the first round of the NFL Draft. It feels like he has barely scratched the surface of what he can do, and a team will draft him on his immense potential.

I have seen Paye mock drafted to the Vikings at pick 14 in multiple drafts, and Mike Zimmer would be a perfect tutor for him. Many teams such as the Jets, Titans, and Saints could use him but may have more pressing needs. I can see him being drafted anywhere from the Vikes to the early second round.

As far as IDP, Paye should be drafted in the same range; late first-round or early second. He should be a reliable producer early but may not put up the gaudy numbers, which Gregory Rousseau or Jaelen Phillips may. Paye has potential, but it could be a few years to know if the massive potential will payout. It’s tough to justify selecting him earlier in IDP rookie drafts because of the unknown.

There is a lot to love about Paye, and his upside is ridiculous. He could end up one of the best pass-rushing ends in this class. But if he doesn’t develop his game and work to get better, he could be another in the long line of physical freaks who don’t make it in the NFL. Paye has a tremendous work ethic, and it will help him choose which path he takes.