Kylin Hill will be bringing his electric talents to an NFL team near you this spring. Should you be targeting him in rookie drafts? 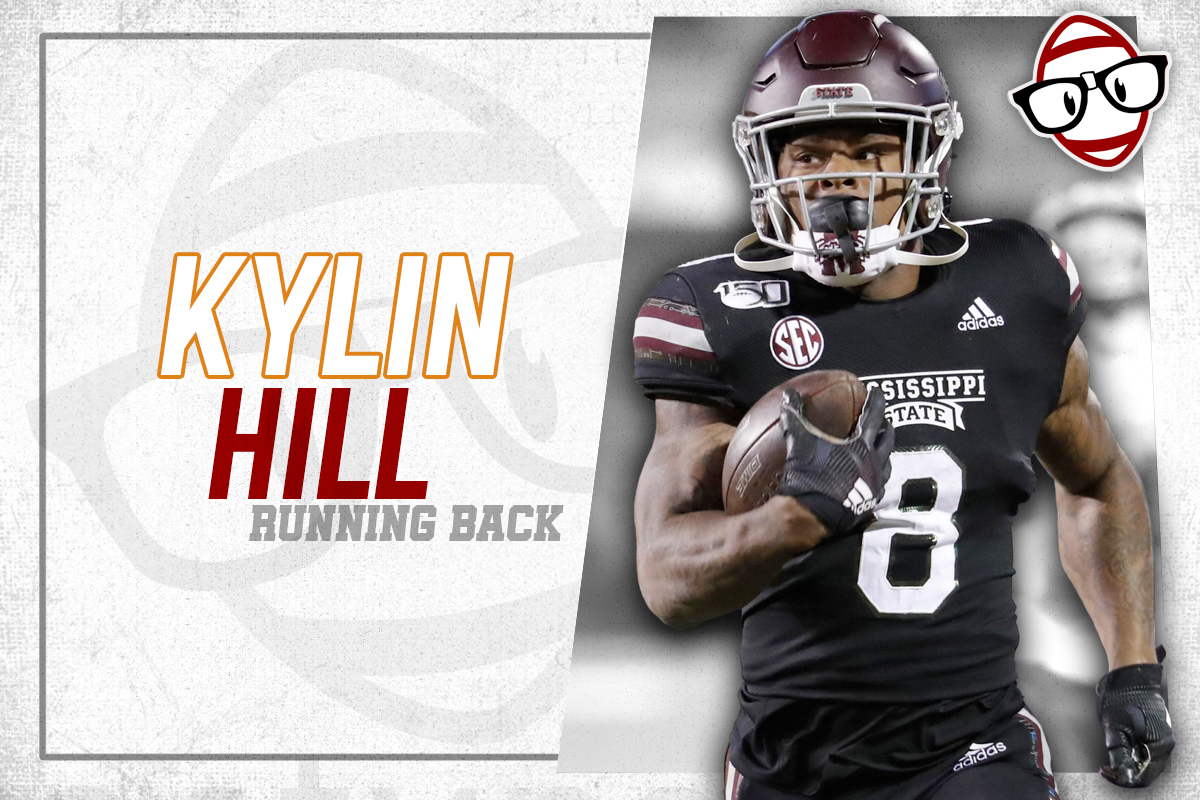 Mississippi State product Kylin Hill is one of the biggest enigmas of the 2021 draft. Can a late-round pick pay off for investors?

Hill is a 5’11”, 215 lb back hailing from Columbus, Mississippi. The #15 RB in the 2017 class, he committed early and spent his college career at Mississippi State.

Though Kylin returned for his SR year- and posted a dominant, 192 -yard performance against LSU- he opted out soon after, in what seemed to be a non-amiable parting.

Hill did hit some fairly impressive marks, creating 61 broken tackles and 741 yards after contact without a fumble in his JR season, both top-four marks in the class.

Still, from a pure analytical perspective, he never crossed either of the thresholds we look for for a true breakout, with career-bests of 24% Dominator and 1.8 Yards Per Team Play. There are successful NFL backs with marks even lower than that (D’Andre Swift, Clyde Edwards-Helaire), though the hits start to fall off.

We’re scouting traits here, so just keep in mind these are highlights. Don’t get excited and take Hill in the first round! As you’ll see, the high notes are quite high.

Hill can win one-one confrontations, and he has a deep toolkit to work with in doing so. Check out this beauty:

Now that’s a highlight. He shows off impressive deceleration on the freeze step then crazy contact balance evading the diving tackle. Start/stop, agility, and balance are three of my favorite things, and the creativity in the moment to find all these different solutions to confrontations is rare.

This one isn’t as fancy:

It’s still a nice rep. He slips the first tackle and bursts between the defenders to turn a TFL into a short gain. They had him dead to rights behind the LOS.

Or how about this one:

If you’re into 215 lb backs that are athletic enough to hurdle DBs, you may like Hill.

You might notice that these are nearly all pass plays; Hill had more yards receiving than running in 2020. He can catch passes. He does drop a few.

Hill is explosive with the ball in his hands:

Give the man an inch and he’ll take 15 yards, and he does so consistently. Hill is awesome with a little space. He has great acceleration and decent top-end speed, gashing defenses for big plays when he can reach the second level.

Watch him take the edge here:

This is well blocked here but it’s impressive nonetheless that he outraces the linebacker and the safety both to create a big gain.

There’s another play from the LSU game where he hits the jets for a big play. I love that he finishes the run strong, too; he did this nicely on other plays as well, running through contact.

I’m not going to serve up film for my dings on Kylin, but I am attaching a link to the Dynasty Nerds Prospect film room below so you can see for yourself.

My biggest issue is Hill’s vision. As you can see, when he has space and time he can be an electric playmaker. But he often makes bad reads at the first level, missing holes or being slow to read the blocks and leaving yardage on the table. He needs time & space to be at his best.

This is typically death for me for a back, though we have seen guys improve their vision with experience (David Montgomery comes to mind).

I also see Hill as playing lighter than his weight. The athleticism is awesome, and certainly an asset, but where are the power runs? At 215 lbs I want to see you go over or through a DB at least once or twice, or put up some reps of you driving the pile for a first down. There’s not much of that in Hill’s tape.

Thirdly, Hill’s hands are very inconsistent, particularly in his 2019 tape. He dropped a ton of easy, bounce-off-the-hands passes. He seemed to improve on this in his 2020 tape, though there are still a few bad drops.

This is particularly rough as Hill’s playmaking ability my have earned him a third-down role right away (Tampa? Tennessee?)

Hill is an exciting player. If you only watch that 2020 LSU game, you’ll wonder why he’s not in the running for RB1 in this class. But the rough aspects of his earlier tape are enough to give my enthusiasm pause.

I think that if Hill lands with an OC that can get him the ball in space, his athleticism and talent at the confrontation point will yield results on NFL playing fields. But dropped passes and poor decision-making in the backfield could keep him on the sidelines, and this makes him a rough eval for me for rookie drafts.

The good news is that if you are a fan, it doesn’t seem like you’ll have to pay up to acquire Hill’s services. I’m seeing him go in the middle of the second as peak value; more frequently he comes off the board in the mid-third round.

At that juncture, pending landing spots, it may be worth taking a shot on the dynamic young player. I’ll certainly take Hill over a WR that projects to be a career secondnd-stringer, though I will still take shots on WRs like Seth Willaims or Tamorrion Terry first.

Thanks for reading! Let me know what you think of Hill. Hit me up on Twitter at @ekballer, I’m always down to talk football and prospects.