In a weak runningback class such as this one. Larry Rountree has a complete skillset that could make him one of the first 5 backs off the board come April 29th. 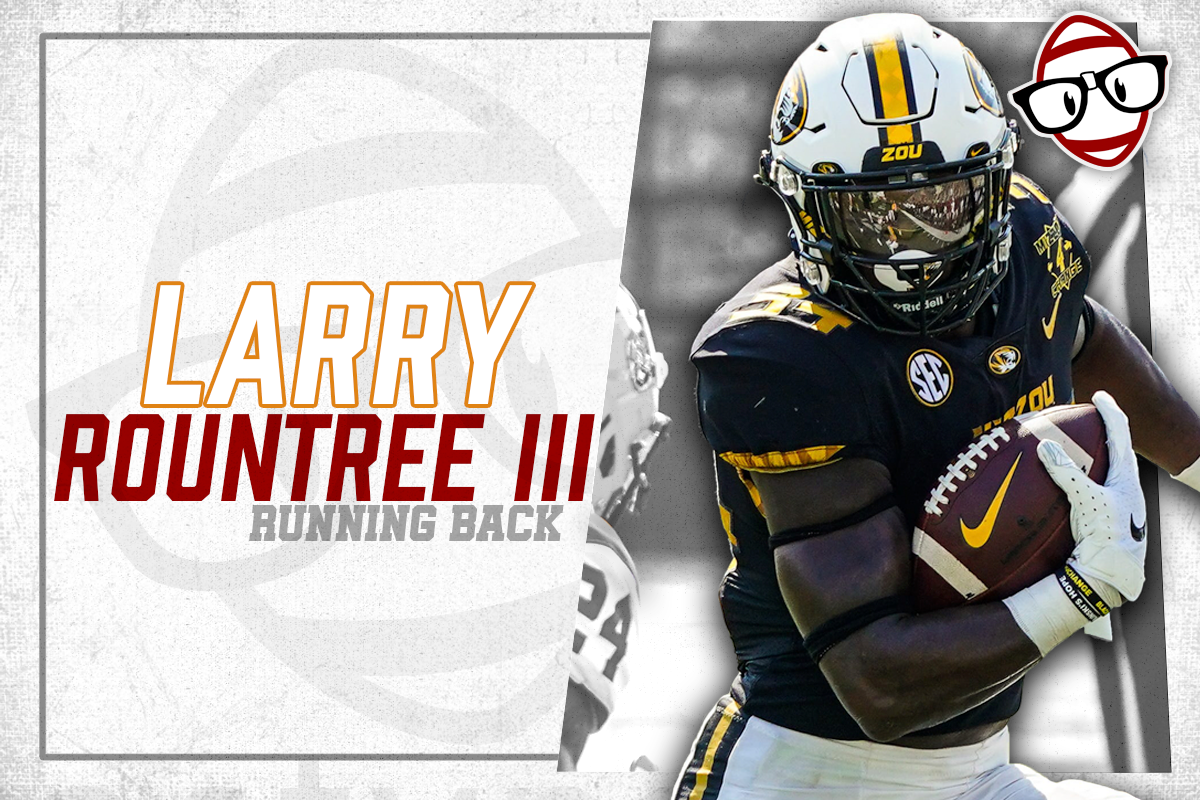 Larry Rountree is an under-the-radar running back prospect who can be the fifth back off the NFL draft board. Especially in a weaker class like this years’. The slight buzz around Larry Rountree’s name is likely because he played at Missouri. However, come April, I expect many more people to fall in love with this tackle-breaking machine.

Rountree has been a workhorse since he has entered the University of Missouri program and has improved in the passing game throughout his career. Four years of 700+ rushing yards in the SEC is almost unheard of, and what makes it even more impressive is that Rountree maintained 4.5+ yards per attempt. That came behind offensive lines that were often overpowered.

Typically, I like to see at least 20 receptions in a season out of running back prospects. However, Rountree saw much-passing work taken away by their pass-catching RB, Tyler Badie. He played alongside Badie for the past three years. Despite not reaching the 20 reception threshold I like, Larry Rountree still showcased the skills to be a three-down RB in the NFL.

When Rountree is 1 on 1 with a defender, he’s not going to the ground. He constantly manipulates defenders so that they aren’t able to tackle him with the correct technique. That often leaves him with arm tackles or being hit without being wrapped up. Rountree’s contact balance and strength allow him to break these tackles and continue his runs.

Running backs with good vision can read their blockers as gaps in the defense are being created. However, those with great vision read blockers before the openings arise. Rountree possesses the rare ability to anticipate holes. That makes his vision his best trait. He also excels at using angles to maximize his yardage in space. His speed is not as devastating as some other RBs in this class. However, Rountree breaks long runs often because he always takes the best angle to avoid defenders while getting upfield.

Rountree has excellent strength for being under six feet. He runs incredibly hard for a guy who some expect to be a speed back. One flaw is that sometimes he doesn’t use this incredible power to his advantage. Often, Rountree tries to be too shifty in the backfield.

He can be that guy for NFL teams with easily transferable strength in his running. If Rountree looks more into running with a downhill approach over his tendency to fall back into his shifty style, he’ll find success at the next level. His speed, combined with his willingness to take bumps and bounce off of defenders, makes him a desirable prospect to NFL scouts. So long as he develops a more well-rounded game.

While Rountree’s better known as a bruising tackle breaking back, his cutting ability and suddenness are very underrated. When tacklers are flying in out of control, he can easily make them look silly with a quick jump cut. An example of Rountree doing this is in the clip below.

Rountree also uses his quickness in traffic. When he sees a glimpse of space, he flies through the opening. Rountree can change pace and direction with just the plant of his foot.

Rountree runs as though he knows his line won’t have a hole for him, which is dangerous. It reminds me of what we saw in Los Angeles RB Cam Akers’ tape last year when he entered the NFL Draft. Rountree’s not a confident downhill runner, which comes as a concern in the NFL. The strength to fight hard running downhill is there, but he wants to be too shifty. It creates a red flag as he enters the next level.

Seeing a young RB who fears holes won’t be open is a hard tick to break. That creates a back that struggles at the next level. Rountree feels team-dependent as he’ll continue to have this issue if he goes to a team with a horrid offensive line. As defenders get faster and more experienced at the next level, scared running becomes a massive issue. That will phase a young back out of the league quickly.

Too much North-South Running

Like the trust issues in his line, this creates a problem of not running downhill out of the gate. An RB that begins their runs north and south makes an issue in picking up the most yards possible. Rountree’s out-of-the-gate north-south approach shows that he already knows the play will crash from the start. That leads to many negative yardage plays and creates headaches for a guy who can’t play three downs.

Larry Roundtree’s primary concern is his ability to become a pass-catcher. I understand why that would be a concern, seeing as he has never caught more than 15 balls in a season. As I mentioned earlier, part of this fault is on Badie. He became a great weapon for the Missouri, who often operated out of the backfield in passing situations.

On film, Roundtree didn’t partake in the vertical passing game whatsoever. He was limited to almost strictly swing routes and short outs. He was effective turning catches behind the line of scrimmage into short gains. However, linebackers were able to keep up with him for the most part. Also of note, Rountree seemed to be burning some of the country’s top linebackers on every route in senior bowl practices.

Rountree is a clear day three running back that comes with upside as he develops. He needs to improve his third-down potential to become a credible force for an offense. For now, he’s a change of pace back on early downs. Draft capital won’t help him. Rountree’s potential in the NFL is in his hands. Time will tell if he can take that next step as a developmental project for a team.