Are you sleeping on Marlon Williams? @devycramps breaks down the film for you. 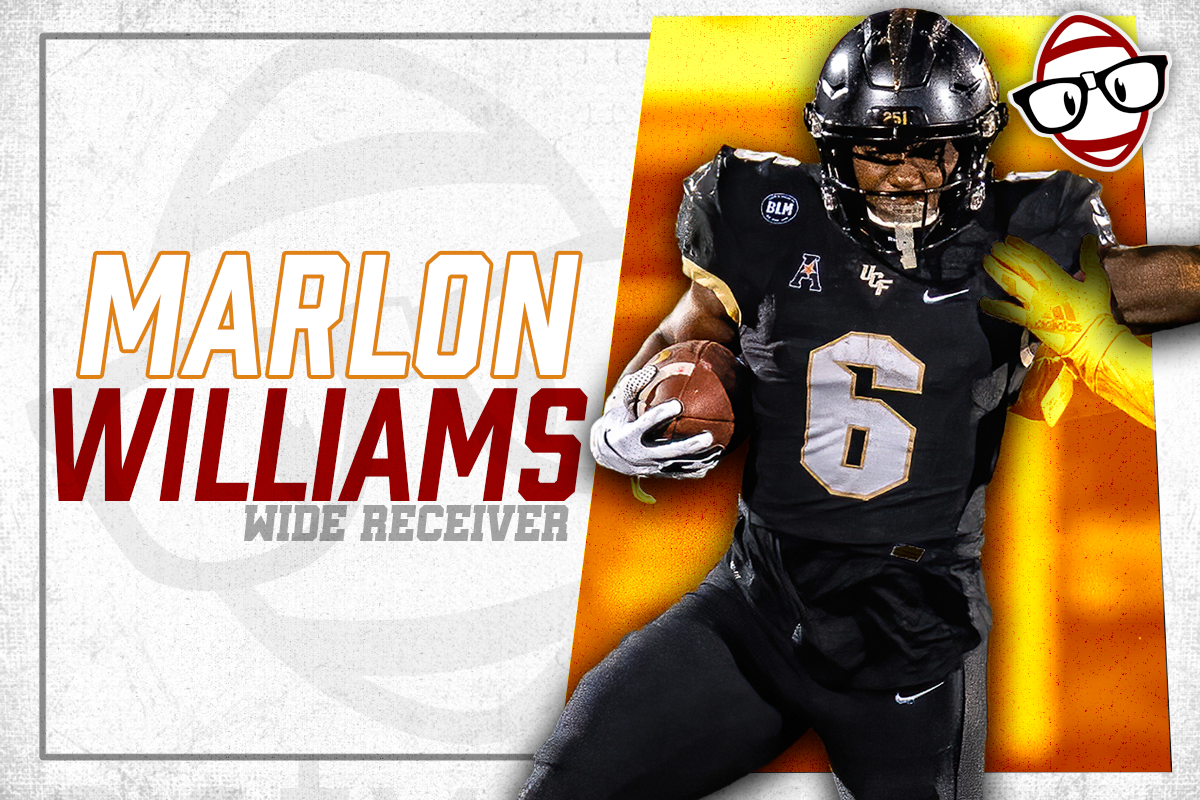 Marlon Williams went to high school at McGill-Toolen Catholic in Mobile, Alabama. In his senior season, he caught 22 Touchdowns on 47 receptions. The 3-star wide receiver chose to attend the University of Central Florida. He turned down offers from schools such as LSU and USC.

Williams got off to a slow start in his college career, failing to surpass 300 yards in either of his first 2 seasons. However, in 20 games between his junior and senior seasons, he compiled 1,756 yards and 16 TDs on 122 receptions. He especially increased his stock in 2020, averaging 1.25 TDs and nearly 130 yards per game over his 8 game season.

Let’s examine the film from his senior year to see why you (and the rest of the world) might be sleeping on Marlon Williams.

Listed at 6’0”, 215 lbs, Williams is a tough, compact receiver with excellent play strength. This especially shines through at the catch point, where he consistently comes down with the ball in contested catch situations.

He also puts his physicality on display with the ball in his hands. Here, he uses an inside release, then angles back towards the boundary. As the DB begins to widen, he plants and crosses his face, without losing speed, and separates. After the catch, he shakes off the DB with contempt and runs through the safety to find the endzone.

I mean, this guy is STRONG.

He’s surprisingly elusive for his build, too. His ability to switch direction at a moment’s notice makes it difficult for tacklers to get an angle on him.

Williams operated primarily out of the slot and was only asked to run a few routes. In UCF’s wide-open spread offense, he had a lot of room to run around as well. This leaves him inexperienced when it comes to route running and facing press coverage. However, I have no qualms about his ability to deal with press coverage given his strength and physicality. Not to mention, he can be seen using his hands well in his routes to swipe by a defender and maintain his acceleration.

As shown above, in the second clip, he displays an understanding of some of the nuances of route running and how to manipulate a defensive back with his release and stem. He will never be an elite route runner because he lacks the natural fluidity and foot quickness, but he can develop some separation skills.

Marlon is not particularly explosive. His get-off from the line is on the slower side and despite his smooth acceleration, he doesn’t have the deep speed to threaten a defense vertically. Additionally, he showed some inconsistencies in some aspects of his game, dropping a few passes that he should have caught, and apparently lacking effort on a few plays.

Williams is projected as an early/mid Day 3 pick in the 2021 draft. With the right landing spot and opportunity, he could become a solid contributor early on. He is most likely to end up as a WR2 mainly working out of the slot. He has the potential to develop into an outside receiver with a full route tree. His production will depend on a QB who has the confidence in him and his arm to throw the 50/50 ball and let Marlon go make a play on it.

The best part is, there’s little to no buzz about Marlon. I believe he belongs in the top 15 WRs in the 2021 Draft. Yet, the dynasty community tends to overlook him when thinking about the upcoming class. This means he could be practically free come draft day, and he has the chance to make your final pick worth your while.