A game-changer with elite speed, Marquez Stevenson is an appealing sleeper selection. 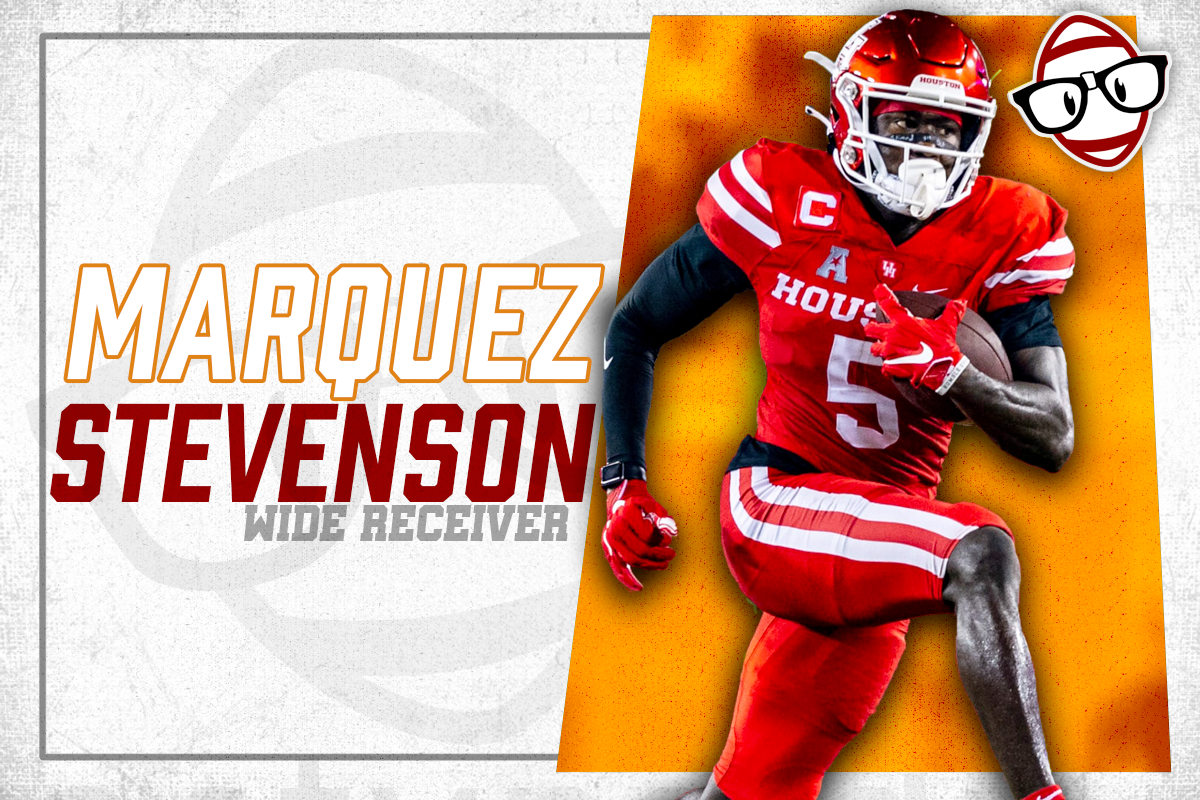 Marquez Stevenson, a 3-star football prospect, committed to the University of Houston in 2015. He attended high school at Northwood in Shreveport, Louisiana. Following his commitment, Stevenson compiled 1,335 total yards and 13 touchdowns for Northwood in 2016. A common nickname for Stevenson in high school and at Houston was “Speedy.” You can imagine how he earned that nickname. His high school track and field coach stated, “he’s been timed in the 4.3s in the 40,” according to the Shreveport Times. Elite speed like that will help your draft stock.

On Friday, April 9th, Houston will host its’ Pro Day. Hopefully, Stevenson will live up to his moniker. Expect NFL scouts to be zoned in and checking their timers when it’s Stevenson’s turn to run the 40-yard dash.

Stevenson’s nickname is Speedy. What else am I going to highlight as his top strength? Often, elite speed or a lack thereof can help or hurt your draft stock more than any other trait.

After analyzing Stevenson’s film, I’ve learned he has next-level straight-line speed. It’s clear to see the difference between track speed and football speed in his highlights. The saying “if he’s even, he’s leavin'” comes to mind when watching Stevenson.

The first clip is a 96-yard catch and sprint to the end zone in 2019 against SMU. Just one quarter earlier, Stevenson had a 75-yard touchdown catch. Similarly, the scoring grabs were the first and only play of both drives.

Below is the opening offensive play of the 2019 game against Tulane. Stevenson turns a 20-yard catch into another single play score.

Remember that opening play TD catch against Tulane you just watched? Later that same quarter, Stevenson broke off a 34-yard run down to the 1-yard line (see below). Over his final three seasons, Stevenson averaged nearly nine yards on 26 rush attempts.

In short, please keep it simple and get him the ball behind the line of scrimmage with a full head of steam. When that happens, he can outrace defenders. It’s when Stevenson’s the most effective.

Stevenson has shown a propensity to swing the momentum of a game with a single play. He’s a triple threat. He can score the ball any way you want it, whether it’s catching it, running it in on a hand-off, or in the return game.

In this clip below, Stevenson ripped off the eventual game-winning touchdown on a kickoff return versus Tulane. It came directly after the Green Wave scored a lead-changing third-quarter TD.

Tulsa had just capped off a 9-play, 98-yard drive with a 4th-and-goal conversion in the following clip. That allowed them to close the lead to a 17-14 margin early in the fourth quarter. On the ensuing kickoff, Stevenson gutted Tulsa with a 95-yard return touchdown.

Stevenson is electric when he gets the ball in space. He can alter the outcome of a game with the snap of a finger. I’m confident any NFL team would be excited about having someone on their roster with this ability. So, if that’s the case, why is Stevenson only being considered a late-round draft pick?

Based on my film review, I would never play loose coverage on Stevenson. Nearly every significant play begins with him against a defender whose giving him space—letting “Speedy” go unimpeded on his route. For the most part, that never ended well for defenders. Thus, I was surprised to see how much he struggled against press coverage in the Reese’s Senior Bowl. Below is a video recapping all of Stevenson’s Senior Bowl reps.

Stevenson frequently looked uncomfortable running any routes that required lateral movement. I haven’t seen much outside of one comeback and a handful of inward and outward routes. For this reason, he can help his draft stock by running a good route tree at his Pro Day next month.

He’s been able to produce against lesser competition at the collegiate level, mostly on speed. However, Stevenson will need to evolve as a route runner to see the field outside of a special teams’ player.

Listed at 6-feet, 190 pounds on the Houston football roster, Stevenson measured at 5-foot-10, 182 pounds at the Reese’s Senior Bowl. Of note, his hand size was 8.5 inches. For reference, no other WR at the Senior Bowl had hands smaller than nine inches.

Stevenson should get drafted on day three of the NFL Draft. A game-changer in college, he has the potential to be an excellent return specialist. Any team would welcome a momentum-shifting return specialist on their roster.

On the contrary, there’s much to be desired of Stevenson when it comes to being an NFL-caliber wide receiver. He reminds me of Seattle Seahawks WR Tyler Lockett. Lockett was also a speedy return specialist who excelled at the collegiate level. Now imagine if Lockett ran almost entirely deep routes and could rarely beat press coverage? Lockett is a complete receiver who can run the entire route tree and win versus press coverage, but Stevenson isn’t.

To this end, Stevenson will need to learn how to deal with the contact at the line of scrimmage and expand his route tree beyond primarily deep patterns. Stevenson’s upside is if he stays in the league long enough as a return specialist, perhaps he can develop as a WR. Who knows whether or not that takes place.