Injury robbed the 2020 season from BYU’s Matt Bushman. @DynastyOasis is here to evaluate the 2019 film of one of the more overlooked TE prospects in dynasty. 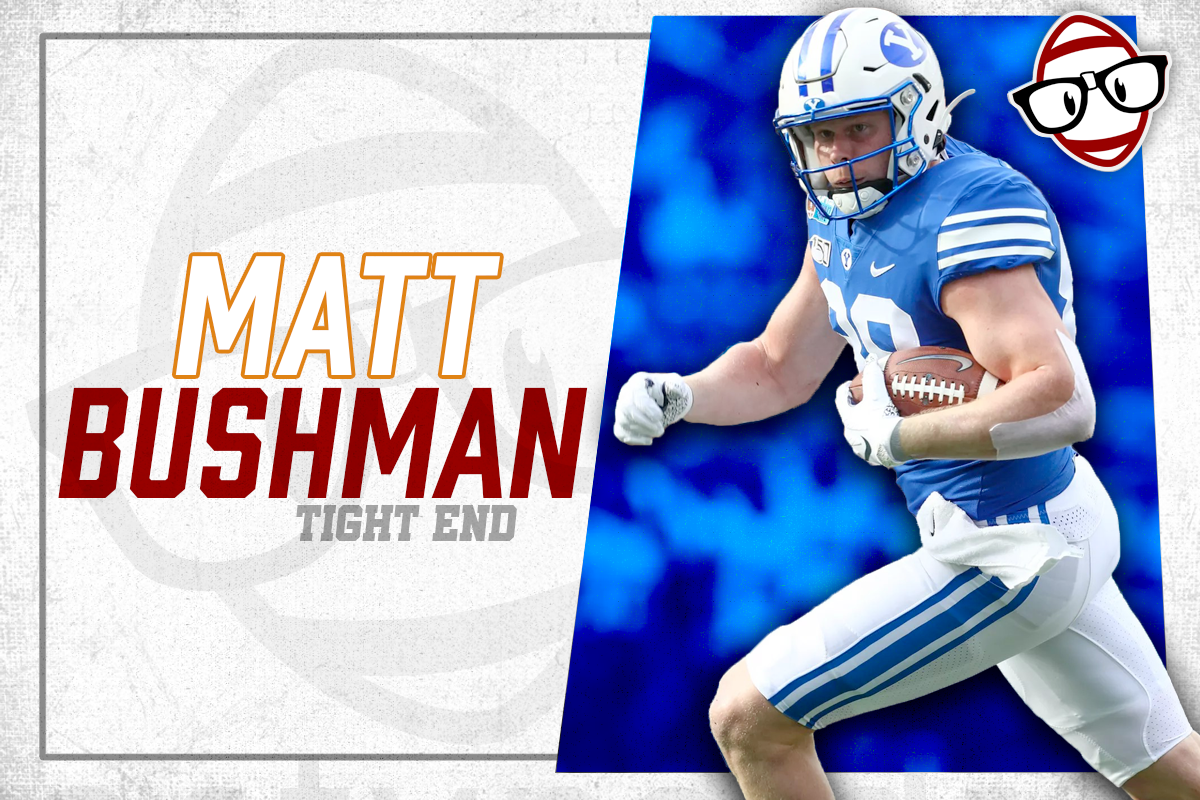 Bushman was the 35th-ranked tight end and a 3-star recruit by 247 Sports. He led the nation in receiving yards at the TE position as a high school senior. After registering 1,583 yards and 26 touchdowns in his final year at Sabino High School, he received recruiting offers from Arizona, Utah, Colorado, and Washington. However, Bushman chose to follow his brother and father’s lead by enrolling at Brigham Young University in Provo, UT.

As a true freshman, Bushman hit the ground running at BYU. In his first season in Provo, Bushman excelled, leading the nation in receptions (49) for a freshman TE. Matt also finished fifth among all FBS TEs in receptions and sixth in yardage. This freshman performance gives Bushman an impressive 18.8-year-old breakout age per Playerprofiler.com and earned him FWAA Freshman All-American honors.

Bushman’s sophomore season was slightly more subdued. His receptions dropped by 20 total in two fewer games. However, it was valuable to see his yards per reception skyrocket with Zach Wilson taking over at QB. Bushman was able to record similar yardage in 2018 despite the drop in overall volume.

2019 would be Bushman’s best and last collegiate season. For a third consecutive year, Matt led the Cougars in receiving yardage. He also finished his junior campaign third in the FBS in yards per reception (min 25 rec.) and was sixth amongst all TEs in total yardage. Bushman also was able to contribute more in the running game as a blocker. Along with Zach Wilson’s ascension, BYU and their star TE looked primed to compete nationally in 2020.

BYU and Wilson would have massive success in 2020, going 11-1 and claiming a victory over UCF in the Boca Rotan Bowl. However, Bushman’s season ended before it began. BYU’s star TE suffered a season-ending injury in practice on August 31st, reportedly rupturing his Achilles. It’s impossible not to think what the final year statistics and tape may have looked like had Bushman not been injured.

This injury will be one of the determining factors in Bushman’s eventual draft-day price. While not a career-threatening injury for most positions, Achilles injuries require roughly 11 months to recover. This timetable means we are unlikely to see much from Bushman at the BYU Pro-Day, March 26th. He may still not even be ready for his initial NFL training camp. However, the 2019 tape and overall collegiate profile should not be overlooked by dynasty managers.

It’s time to dive into the tape from 2019 and decide if Bushman is a player capable of overcoming an unfortunate 2020 injury.

Affectionately nicknamed “Honey Hands” by teammates, Bushman repeatedly throughout 2019 out-competed defenders at the catch point. Possessing good height and balance for a TE, Bushman uses his frame and the leverage it creates to efficiently wall-off defenders on back-shoulder throws.

Senior Bowl stand-out Keith Taylor is shown in coverage on Bushman in the above play. He shows good coverage recognition here, getting his eyes back to the QB early and separating late without pushing off.

Another spectacular catch by Bushman against 2020 NFL rookie Terrell Burgess. Incredible late adjustment to the throw by Bushman. He is astoundingly graceful along the sideline for a 6’5″ TE.

Contested catches over the middle are also a regular occurrence for NFL TEs. Bushman performed well in these situations in 2019, as demonstrated here in consecutive plays.

One of the most apparent separating factors for fantasy TEs at the NFL level is creating yards after the catch. Bushman isn’t exceptional in this area, but I saw better balance and shielding ability from the BYU stand-out than expected. Despite lacking premier athletic traits, balance and leg drive allow Bushman to rate at least average as a runner.

Bushman also can break tackles of smaller defenders. Bushman settles down within the zone before stepping out of two tackles in the above play.

While blocking doesn’t score fantasy points, it does affect NFL opportunity and draft capital. So the idea that it wouldn’t be a valuable part of the dynasty evaluation never resonated with me. While Bushman didn’t come into Provo as an elite run-blocking TE, he had become a willing and even above-average blocker by his junior season.

Another long run is set-up by Bushman, seen here again pancaking a smaller defender. He’s a tenacious blocker and stays with his blocks.

Above is a chance to see him hold up in pass protection. Bushman (aligned at TE left) initially gives ground but understood where he had help from the RB and shows an ability to drop his weight and anchor against a stronger defender.

To give an example (above) of how being involved in the running game can amplify a TEs dynasty value. Bushman is open by 8 yards because he and the BYU personnel have sold run on 4th and 1. The slick swim move helps Matt avoid contact with the safety at the top of the route.

The injury that derailed Bushman’s 2020 season likely hurt his NFL draft and dynasty stock. However, I believe that when qualifying the talent he competed and excelled against as a junior, it’s rational to think he would’ve been a massive beneficiary of Zach Wilson’s statistical explosion in 2020.

These factors lead me to believe that if the NFL signs-off on Bushman’s long-term health by drafting him amongst the top-8 TEs in the upcoming draft, he firmly represents one of the best cheap stash TEs in dynasty. Drafting and committing to young TEs isn’t for the faint of heart. It is unreasonable to think that Bushman is ready, coming off an injury, to produce for an NFL roster in his rookie season. However, he has the collegiate profile and film requisite of an NFL producer by year two or three. In shallow roster dynasty leagues, Bushman doesn’t need to be rostered headed into 2021 but is a name to keep on your watch list and track as we head towards 2022. In deeper roster leagues, I am currently selecting Bushman with a 5th or 6th round rookie pick and holding him on a taxi squad until 2022.

That’s all for now. Dig deeper into rookie prospects with a #NerdHerd membership. For the price of a cup of coffee a month, you’ll get access to the Prospect Film Room, the best #Rankins in the business, and the revolutionary #DynastyGM tool. For more prospect breakdowns, check out the 2021 Rookie Profiles from our excellent #NerdsStaff!