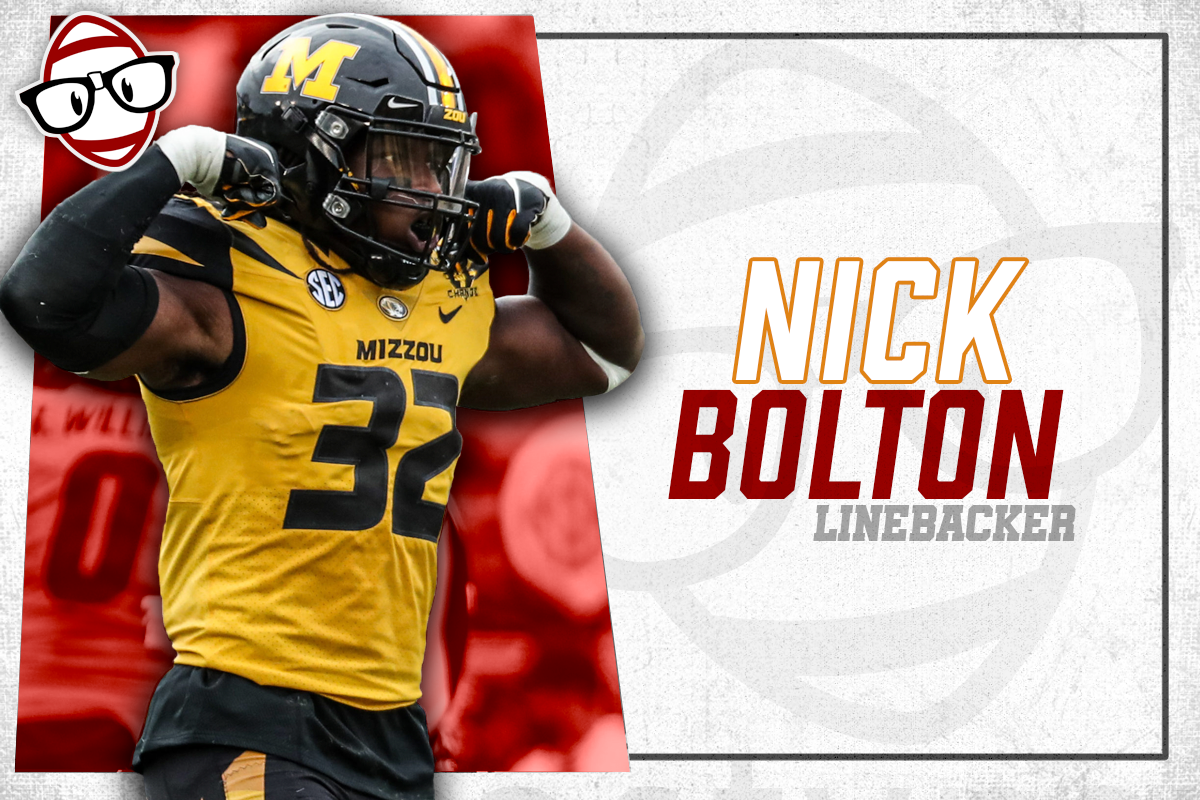 Nick Bolton attended Lone Star high school in Frisco, TX, where he would be named District 13-5A in his junior and senior seasons. He posted over 200 tackles and six interceptions combined during that time while leading his team to a 12-2 record before committing to Missouri. Nick Bolton was a three-star recruit with a 247sports composite ranking of 0.8484; he was ranked outside the top 1000 players in the 2018 class.

Nick Bolton has never been handed anything in life. Everything he has done, he has earned. That was no different upon arriving at Missouri. As a freshman, he earned playing time mostly on special teams. Bolton would finish his first season with 22 tackles and one sack, his biggest game coming at Alabama when he recorded eight tackles. His physicality didn’t go unnoticed as he played in all 13 games and earned himself playing time as he entered his sophomore season.

If there was ever doubt if Nick Bolton could tackle, look no further than his 2019 season. Bolton would average 8.9 tackles per game in 2019, according to mutigers.com, which was best in the SEC. He would have nine tackles or more in eight of his twelve games played. Bolton would earn a 91.1 grade from PFF, making him one of the nation’s highest-graded LBs. As a sophomore, he would collect 74 solo tackles. Those are All-Pro NFL LB statistics.

His final season with the Tigers would be no different from a production standpoint despite only playing in ten games. He would collect 95 tackles, 53 solos, eight tackles for loss, and two sacks. One of the most intriguing stats I found on Bolton was how he brought a swagger that inspired his teammates. According to Joe Cox from saturdaydownsouth.com, the Mizzou Tigers improved defensively from a point per game perspective in each of his first two seasons. The 2020 season brought its challenges, including a coaching change and the Tiger’s defense was unable to improve again. They gave up over 30 points per game. Regardless Nick Bolton proved himself to be the heart and soul of the Tigers defense.

I want to know the person who turns on the Nick Bolton highlight tape and doesn’t notice how physically he plays. Bolton is a tackling machine who never holds back when he attempts to bring down a ball carrier. He has a very old-school style of LB play, and you can see how excited he gets when he or his teammates make a big hit.

Nick Bolton comes from a sports family, most notably his father Carlos, who played at Louisiana Tech in the early ’90s. Bolton learned a thing or two from his dad, and it shows in his play. Carlos Bolton tells a story of how he studied game film with his son since he was a first-grader. His instincts and recognition of plays help him tremendously when he’s out on the gridiron.

This isn’t something you can teach a player. It’s one of those rare characteristics that some players just have. It comes from wanting to be great and being unselfish to accomplish the goal of winning games. Tom Landry once said, “Leadership is a matter of having people look at you and gain confidence… If you’re in control, they’re in control”. This quote makes me think of Nick Bolton and his style of play. What he brings to defense is much more than what you can read on a stat sheet. Bolton is usually the first to talk to his teammates on the sideline between possessions and encourage his teammates during timeouts.

According to gobigrecruiting.com and 247sports.com, the average size for an FBS Power 5 linebacker is 6’2″. So in that regard, Nick Bolton is the Drew Brees of the position. We won’t know his true testing numbers until his pro day, but outside of his height, Bolton does fit the average weight and 40 times among top-level LBs. There will always be outliers at any position. It’s a bit short-sided to use a player’s size as the sole reason he won’t do well in the NFL. The fact that he is one of the most productive linebackers in the SEC, which is the top-tier Power 5 conference, should tell you all you need to know.

Nick Bolton seems to be all over mock drafts with grades from the late-first to mid-third round. The consensus seems to be that he should be an early day two pick in April. The Missouri LB brings big-time college production and a playing style that any defensive coordinator in the NFL would love to have.

If you’ve been playing IDP dynasty fantasy football long enough, you are fully aware of how important landing spot and draft capital are to a prospect. Nick Bolton has all the tools to compete to be a Week 1 starter upon being drafted. During his freshman season at Missouri, Bolton showed no problem earning it through his play on special teams.

There are quite a few NFL teams who would be great fits for Nick Bolton. The Broncos, Patriots, Raiders, and Washington Football Team all come to mind. These are the teams that I think he could potentially be the week one starter for. Bolton saw a majority of his snaps in college as the MIKE linebacker but has played off the ball LB as well. Bolton will bring a boost to the run game as well as being an effective Blitzer when asked.

Nick Bolton averaged 6.8 tackles a game while at Missouri, that would be his ceiling as an NFL linebacker. He will likely not be asked to be an every down LB as a rookie. Bolton doesn’t offer enough size or athletic profile to believe he will be a sure thing. There’s fear he can get lost and asked to be on the sidelines in obvious passing downs. That surely would impact his potential in IDP leagues as his snaps will be limited.

Bolton could step in to be a serviceable LB as a rookie but his landing spot will play a huge role in determining that. Three 2020 rookie LBs Isaiah Simmons, Malik Harrison and Jordan Hicks all finished with 40+ tackles. All three players were able to accomplish this by playing less than 35% of snaps. There’s potential even as a situational LB Bolton will still hold fantasy value as early as this season.

I appreciate your continued support of the dynasty nerd’s IDP team. You can find me on Twitter @Glosser13. I’m always available for questions on all things fantasy football. Feel free to reach out at any time and let me know what we can do to help improve our IDP content. Stay tuned for more rookie profiles from the team, and let’s continue to grow #FFIDP.