Pat Freiermuth is one of the top TE’s in the 2021 draft class. Due to the hype around Kyle Pitts many are overlooking the talented Junior out of Penn State. @ReflipeWThenuz breaks down the player and his prospects. 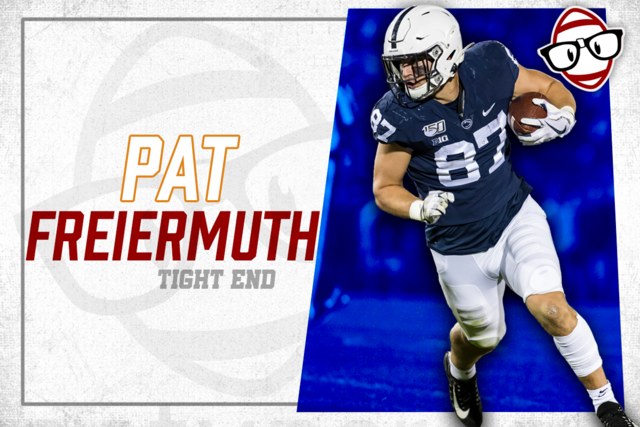 Pat Freiermuth has been one of my favorite TEs in all of college football over the last three seasons. The talented third-year kid out of the Brooks School in North Andover, Massachusetts, is one of the best overall TEs in the entire nation. As a season ticket holder to Penn State, I have enjoyed the pleasure of watching this young man grow into the Kwalick-Clark Tight End of the Year in 2020. Freiermuth dominated his prep level competition in High School, as you can see from his highlights below.

Despite only playing in one full season, Freiermuth managed to leave his mark on Happy Valley. His freshman year highlighted much of the promise that saw him receive his scholarship in the first place. He displayed a true nose for the endzone hitting paydirt eight times on only 26 catches. You can see his career stats below.

Pat would continue to make use of his TD acumen, eventually setting the Penn State tight end TD record in only 29 games. That is correct; he broke Mike Gesicki’s record in 16 fewer games. An amazing accomplishment considering Gesicki stayed in school all four years, and Freiermuth’s final year in college was marred by Covid and injury issues. Without further ado, let us dive into the film and take a look at what makes Pat Freiermuth a special dynasty prospect.

As mentioned above, the first thing you will notice about Freiermuth is his nose for the end zone. When you break down the numbers, the kid from Massachusetts scored a TD on 5.75% of his catches in college. Take a look at a couple of his more memorable scores below.

Freiermuth will certainly ingratiate himself to his next QB with his excellent hands. He does a fantastic job of reaching out and using his mitts to snag the ball out of the air. He doesn’t let the ball get to his body, which can lead to deflected passes and, ultimately, interceptions. Check out a couple of examples of Pat making contested catches below.

He’s got a mean streak

One area that will separate Freiermuth from other TE’s is his blocking acumen. He is excellent at the point of attack, making him an asset in the running game and the passing game. Take a look at him handling defenders below.

Tight End to watch for in the 2021 NFL Draft. Pat Freiermuth. He can catch and block. #Steelers pic.twitter.com/hPTE3Cmvte

First thing that jumps out is his blocking. Excellent combo block here. Displacement on the double then peel off w/good timing. pic.twitter.com/dWsEv5KBqg

Pat Freiermuth also plays with a nasty streak. This is important for the TE position as he will routinely be lined up across from larger defensive ends. You can see in the plays below that he not only fights through contact after making contested catches, he also manages to hold onto the ball when absorbing big hits over the middle of the field.

Freiermuth has some nice techniques in his routes. Especially for a player of his overall size. You can see him lineup on the outside and inside routinely beating linebackers with his route precision. While not possessing top-end speed, he has deceptively quick feet for a man of his size, as you can tell from the numerous highlights above.

If there is a complaint to be made, Pat Freiermuth, it’s that he doesn’t possess that extra gear. He is not the fleetest of foot for a big man. Despite this limitation, he managed to put up a very respectable 12.9 yards per catch average. It is slightly less than Kyle Pitts’ 14.9 ypc average, but I am betting that Freiermuth will put Pitts to shame when it comes to strength testing if and when this year’s candidates ever get the opportunity. According to PSU strength coach Dwight Galt, Freiermuth benches 380, cleans 350 and squats 540.

For my money, Pat Freiermuth is the best TE in the 2021 draft class. I’m sure that many in the dynasty community will disagree with me and go with Kyle Pitts as their top prospect. However, when I look at Pitts, I see an oversized WR. That is the beautiful part about football and dynasty fantasy football in particular. Different managers are going to place different values on players they like. I, for one, have always been willing to go against the grain to get ‘my guy.’ I am sure that Pitts will make a fine prospect, but for my money, I am much happier to wait a couple of picks later and select Pat Freiermuth. He will most likely be selected in the second round of both the NFL and your TE premium drafts.

Do yourself a favor and draft the kid who has carried the moniker of Baby Gronk since his days in Massachusetts Prep School Football. I promise you won’t be disappointed.

Thank you for reading this article! Please be sure to join the #Nerdherd so you don’t miss out on any of the amazing things we have to offer Dynastynerds.com. You will get rankings, extra podcasts, and access to our rookie film room. For just a couple bucks more you can get access to our revolutionary DynastyGM tool. So much for so little, why miss out on all the fun. Follow me @ReflipeWThenuz for more dynasty content and other musings.