Gather ’round, IDP Nerds. Let @Spydes78 tell you why passing on EDGE, Patrick Jones II, in your rookie draft might be a HUGE mistake. 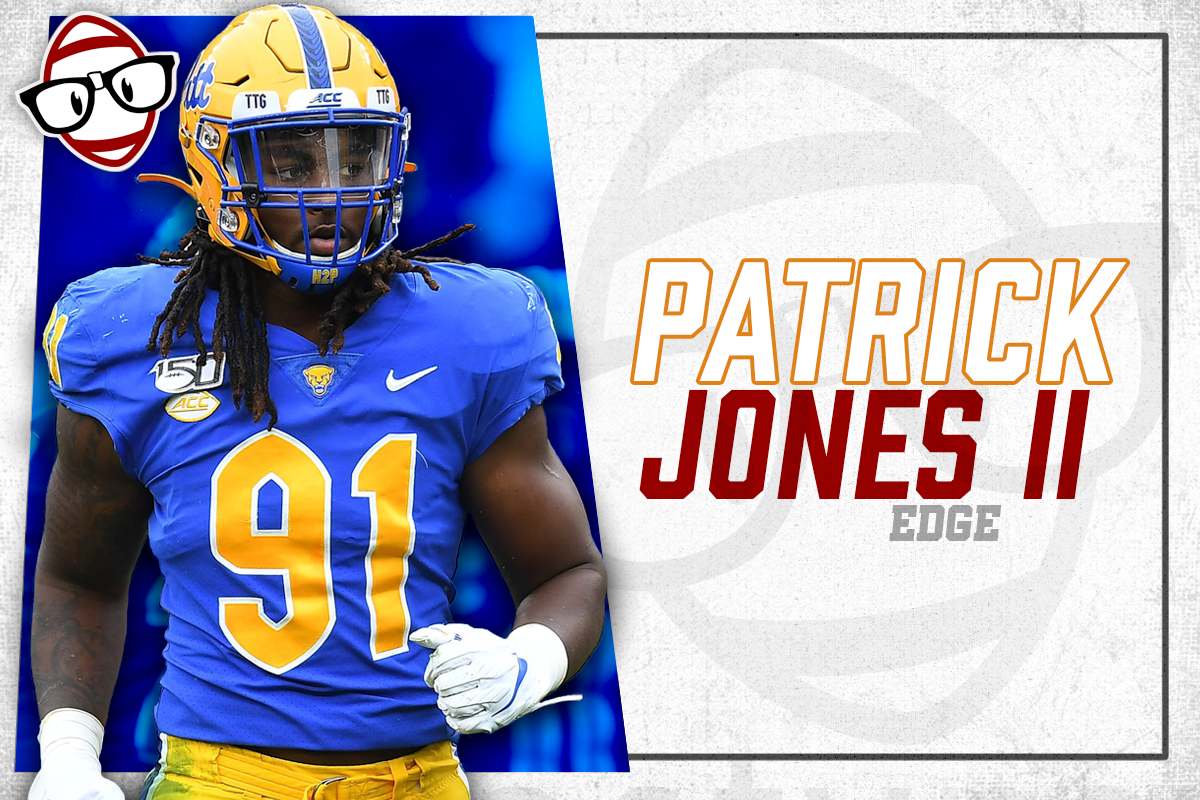 Hello, fellow Nerds, and welcome to another in our ongoing draft prep series, chock full of articles to prepare you for your upcoming rookie draft. In this installment, I will showcase standout defensive lineman Patrick Jones II from the University of Pittsburgh. If you haven’t guessed from the quote above, Patrick is a very large human being, measuring 6’5” tall and weighing in at 260 pounds. As you can imagine, these are the sorts of measurables that demand attention from pro scouts. And, as a savvy dynasty owner, you’re wise to let the gaze of the NFL be your guide. So, sit back and enjoy this overview of a big man doing big man things!

I know, I know. Let that fallen horse make his way to the glue factory already. But trust me when I tell you, the first thing that jumps out on Jones’ film is the size advantage. There are ACC linemen who are going to have nightmares about Patrick Jones II for years to come. Jones has the power to impose his will in the trenches, particularly against more diminutive offensive tackles. His primary tool is the bull rush, which he uses to devastating effect. Look no further than the clip below for evidence of this ability. Behold as he engages the opposing tackle, forces him to backpedal all the way to the quarterback, and then completes the sack (all while still engaged with the tackle!). That is raw power, folks. Yowza!

Beyond the obvious brawn, another valuable attribute for Patrick Jones II is his relentless pursuit of the ball carrier. He earned All-American honors in 2020 and was consistently regarded as a premier, collegiate edge rusher in large part because he has no quit. If you watch film of the many sacks he has accrued, you find that he rarely makes a direct, textbook assault on the quarterback. Instead, he often embarks on a circuitous, arduous fight to the pocket and is ultimately rewarded for his persistence. Perseverance is universal to his game and is not unique to his pass rush style.

Check out this clip from Pittsburgh’s 2019 matchup with North Carolina. Jones is chopped during his initial pursuit of the quarterback, however, he is stout enough to maintain his footing. He then recognizes the swing pass to the running back (none other than draft darling, Michael Carter) and manages to chase him down from behind for minimal gain. A play like this speaks volumes not only about a player’s athletic ability but also his football character.

Certainly, one aspect that you have to be mindful of when evaluating big guys is that the size doesn’t compromise speed. Quickness is in the DNA of the modern NFL, and this is true even in the trenches. With the lack of an NFL Combine this offseason due to Covid restrictions, prospect speed has certainly become more speculative. Rather than finely dissecting 40 yard dash times to the tenth of a second, we must instead evaluate game speed from the available film. In following through on this process, I was pleased to find that Jones shows evidence of a proportionate burst for a player of his size. When combined with a shoulder dip, he can get past a tackle and make a hasty ascent to the quarterback. The example below features a strip-sack against Duke in 2019 where Jones capitalized on precisely this type of speed rush scenario.

While Jones’ stature is certainly imposing, he is without question over-reliant on the mismatch afforded by his physical attributes. He is predictable in his attack and either does not possess or utilize a full arsenal of pass rush techniques. Too often, he allows offensive linemen to get locked on to him with their hands. This negates any advantages of leverage or momentum. Hand weakness is not an outright condemnation, as he is certainly a young player with room to develop. But he will almost certainly need next-level coaching on defensive hand placement and pass rush techniques to fully realize his potential.

As is often the case with taller prospects, Jones struggles to ‘get low’ in his pursuit of the quarterback. Stiffness for a big-bodied defensive end means that they present a larger, more accessible target for blockers. Ironically, one of Jones’s greatest strengths, his large frame, can also be a weakness in this regard.

To illustrate this point, kindly contrast the two clips below. In the first, you’ll see one of the league’s best, Von Miller, showcase his characteristic ‘bend’ en route to a sack. Notice how Miller leans at nearly a 45-degree angle during his pursuit. This lowers his pad level, making him virtually inaccessible to the opposing tackle.

The second clip is Patrick Jones II applying pressure to Notre Dame’s Ian Book.  Note how he attempts to bend but his frame is just too large. Ultimately, he is neutralized by the blocker.  Certainly, a player must work within their body type, but this shortcoming is certainly a weakness that pro linemen will look to exploit.

Size and speed are attributes that cannot be taught. Thus, despite some technical weaknesses, Patrick Jones II presents a very appealing NFL prospect. His dogged on-field tenacity portends a strong work ethic. And, it’s reasonable to assume that as a hard worker, he’ll be receptive to coaching. The right staff could really unlock Jones’ potential, so be cognizant of his landing spot and that franchise’s reputation for defensive development. Additionally, based on the outlined skillset, Jones would be best utilized in a 4-3 scheme, where he can apply consistent pressure from the outside.

There is no consensus from NFL Draft experts, who are currently projecting Patrick Jones II anywhere from the 2nd to the 4th round (or beyond). Obviously, high draft capital would indicate that a team has particularly lofty aspirations for him, which could translate to a faster route to meaningful snaps. Regardless, based on my evaluation, I feel that Jones should be on your dynasty rookie draft radar. However, you’ll likely need to exercise some patience. I don’t anticipate him making a huge splash with bawdy first-year stats. My recommendation would be to seek him out as a 5th round (or perhaps even undrafted) stash. Find him a spot on your bench, and allow him time to develop. Your meager investment in the big guy may pay huge dividends.

Thanks for reading through this draft profile spotlight. I thoroughly enjoyed bringing you this piece and would love to continue the conversation on this prospect. Please feel free to comment below or contact me @Spydes78 on Twitter. And also, stay tuned to @DynastyNerds for a steady pipeline of content from our eminently qualified staff to carry you through your offseason. Enjoy the grind!