After starring in “Last Chance U” Rakeem Boyd blazed an interesting past at Arkansas. From talented first year player to Sophomore Stud to quitter. He has worn many hats in the college ranks. @ReflipeWThenuz breaks down the player and his prospects in the NFL. 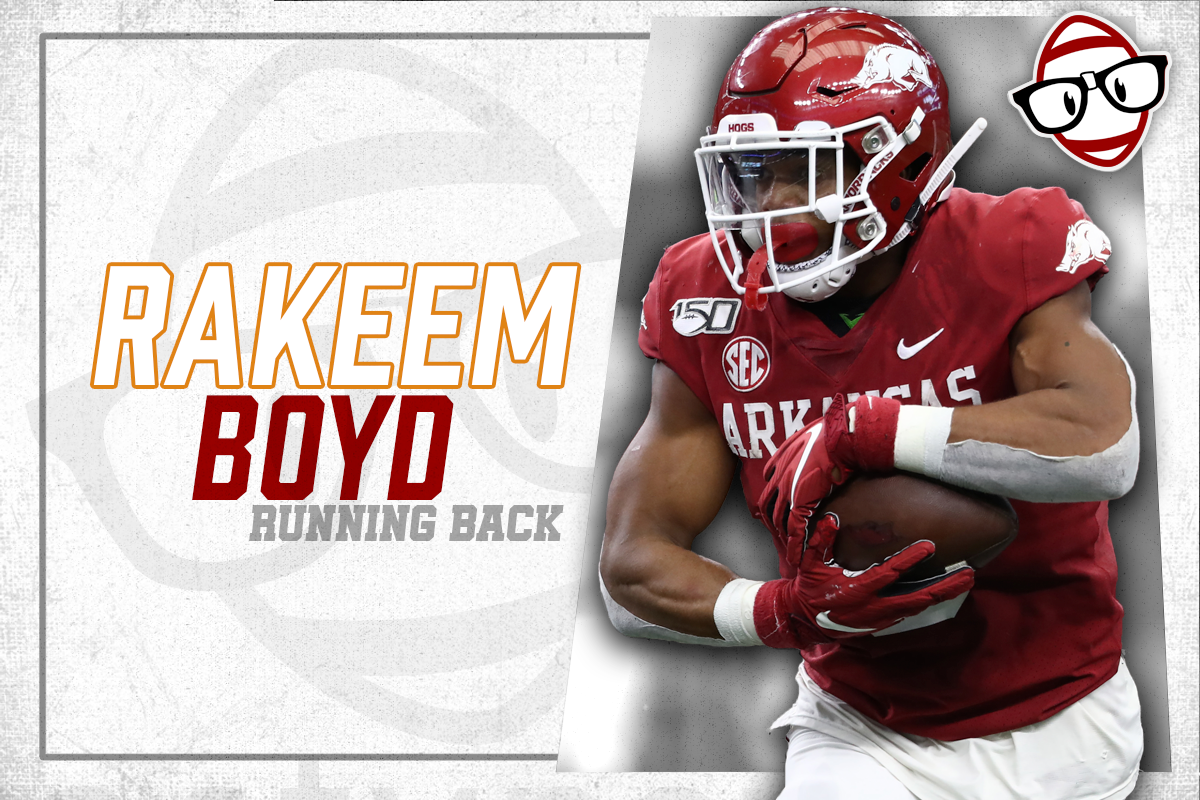 The 2021 NFL draft class will likely be one of the most unique in modern history. Never before have so many draft-eligible players decided to sit out either part of or their entire final season of college football. Rakeem Boyd is one of those players. After taking a truly oxbow path through the college ranks, Boyd decided to opt-out of his final season at Fayetteville early.

Boyd came out of High School with a decent amount of hype. He originally committed to Texas A&M. At the time of his signing he was the no.6 ranked High School RB in the entire nation as ranked by 247 sports which you can see below.

Things didn’t go as planned for Boyd at College Station. According to reports, he struggled with his class load and transferred to the notable Independence Community College. Here in the JuCo ranks, Boyd got his career back on track, busting out for 1,211 yards and 14 TDs. During this breakout season, Rakeem caught the nation’s attention in the third season of the popular Netflix documentary “Last Chance U.” You can see some of his JuCo highlights below. Arkansas eventually came calling, and Boyd was back in the SEC.

While at Arkansas, Boyd blossomed into the RB that many scouts thought he would be coming out of High School. During his first two seasons in the SEC, Rakeem Boyd proved to be a foundation player for the Razorbacks. He led the team in rushing both years. He also impressively managed to average over 6.0 ypc in both seasons despite playing against elite-level SEC defenses. You can see his Arkansas numbers below.

Despite enjoying a healthy amount of success during his first two years at Arkansas, 2020 was not the same level of production. Boyd, along with the rest of his team, struggled against the stiff SEC West. After only playing in six games in his final season, Rakeem Boyd decided to step away from the team and focus on his NFL future. Let’s take a look at some of the traits he has to offer at the next level.

Unlike most years, we will not have an NFL combine heading into the 2021 NFL draft. This fact will place a higher emphasis on film analysis. To that end, the first thing you will notice about Boyd when watching his tape is his speed. The 213 lb RB reportedly runs in the high 4.5 40 range. When you see the amount of big plays he managed to put on film, this is a completely believable number.

While he has never been a prolific pass catcher Boyd has displayed adequate hands in the past. He will certainly not be cast in a Darren Sproles role. However, as you can see below he has the potential to catch swing passes and work underneath against opposing defenses. Note how he uses his hands to pluck the ball from the air not allowing it to get into his body.

Another area that Boyd does well with is power running. While not a giant RB, the likes of a Derrick Henry or Leonard Fournette, Rakeem Boyd runs with nice power and balance behind his pads. He is not overly shifty, but you can see below that it will take more than an arm tackle to bring him down.

Rakeem Boyd has also displayed some decent pass blocking chops. He is not afraid to throw his body into defenders be they linebackers or d-linemen. You can see some of his pass blocking below.

While Boyd has some traits to admire, there are certainly some weak points to his game. One of the most glaring weaknesses to Boyd’s game is his lack of wiggle. He obviously has some straight-line speed. However, if he is forced to make more than one cut before the second level, it severely hampers his long speed. He will be best suited to play in a downhill one cut-and-go scheme.

As I mentioned above, Boyd has some decent hands in the passing game. Despite his natural hands his abilities as a route runner are as yet untested. Arkansas simply did not utilize him as a significant pass catcher. He will need to work on his route tree out of the backfield at the next level for certain.

While he displayed some nice desire on the field, making numerous effort plays, his commitment to the game could also be questioned. Some at Arkansas were more than disappointed in the way he walked away from the team even though he wore the Captain’s C. This may not sit well with some NFL franchises.

In the end, there are several things to like about the game of Rakeem Boyd. After studying his tape, I see a player who belongs on an NFL franchise. His likely role at the next level will be that of a role player. This could certainly change based on his future work ethic and the situation he finds himself in. He will likely be a day three selection, or a priority free agent add following the draft. Players of his talent level have obviously succeeded in the past. You could do worse than selecting Boyd in the later rounds of your dynasty draft. He has certainly flashed the talent to make some noise given the right circumstances.