Looking for a sleeper RB in later rounds of your rookie drafts? @WooLee_FFB analyzes whether or not rookie running back Rhamondre Stevenson is worth a look in the later round of rookie drafts. 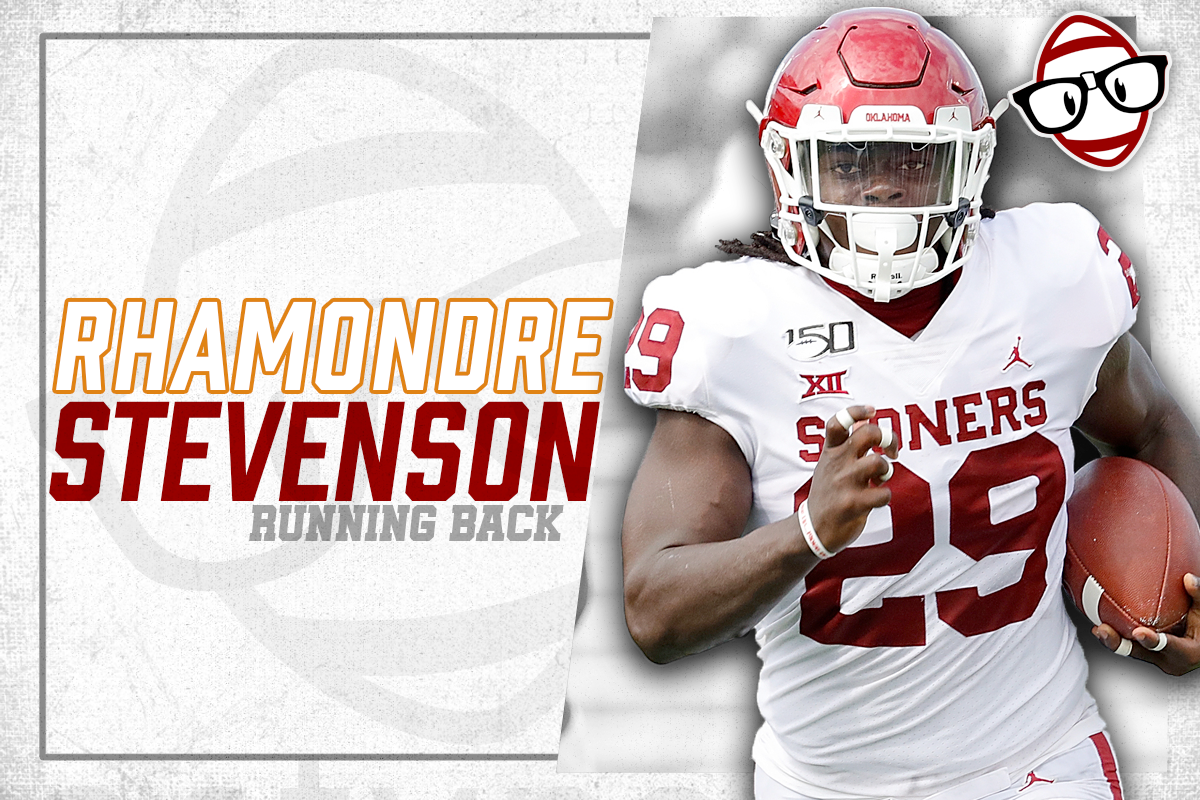 Looking at the running back prospects from the 2021 rookie class, there is a lack of 3-down style running backs. Rhamondre Stevenson of the Oklahoma Sooners showed flashes of talent as a rusher and showed potential as a receiver. Stevenson could turn out to be an effective rusher for an NFL team that is in need of a power RB.

Rhamondre Stevenson played two seasons for the Oklahoma Sooners. Coming in as a transfer junior, Stevenson had a modest role in the Sooners’ offense. Even with Jalen Hurts and Kennedy Brooks each finishing over 1000 rushing yards with each getting over 150 rushing attempts, Stevenson was efficient with his opportunities with 515 yards on 64 rushing attempts in 2019. In 2020, Stevenson split the workload with TJ Pledger. Stevenson was clearly the better overall running back as he finished with 665 rushing yards on 101 rushing attempts along with 7 rushing TDs. Stevenson got some work in the receiving game as well. He finished with 211 receiving yards in 18 receptions.

Looking at Stevenson’s statistics in the 2020 season, he was mainly used as a rusher. Stevenson was an efficient runner as he was able to post an average of 6.6 Y/C, only playing six games of 2020. Stevenson also contributed to the passing attack as he posted 211 yards on 18 receptions (on 25 targets). This isn’t something to rave about, but it is encouraging to see that Stevenson was involved in the passing attack. Looking at the statistics and his measurables, Stevenson can be viewed as a pure rushing RB with receiving upside.

Looking at Stevenson on film, he is a powerful runner that is not afraid to put his shoulder down to grab the extra yard. Stevenson does a great job using his strength to keep powering through defenders to make sure to grab that extra yard in every play.

Though Stevenson is known for his power running style, Stevenson also displayed elusiveness and balance. Stevenson does a great job juking out defenders and keeping upright in his runs. Because of his size and his elusiveness, Stevenson was hard to bring down.

One of his underrated skills as a prospect is his receiving ability. Stevenson did not see a ton of receiving opportunities, but he did show flashes of potential in the receiving game. He mainly caught check-downs, but this is an area that Stevenson has proved he has potential.

Lastly, Stevenson’s size allowed him to provide great pass protection. His big body and strength allowed him to be a factor in the passing plays. He did a great job making contact with the rusher and staying with him until the play was over. His big size and fearlessness of contact made him effective in pass protection situations.

Stevenson has one very distinct weakness, and that is speed. In his film, Stevenson has that small burst of explosiveness when hitting the holes but did not have the speed to break away. This caused a ton of problems for Stevenson in 2020. He was constantly tackled for losses because of his inability to get outside quick enough. His 40 yard dash time of 4.63 seconds did not help this assumption.

Though many players may not need speed to be successful, running backs should at least have a 4.5 second 40 yard dash time to keep up with the speed in the pro level. A lot of his damage in his years with the Oklahoma Sooners was from in between the tackles. Though Stevenson does have potential in his receiving abilities, he does not have a large sample size for many fantasy managers to be confident about. He has potential, but the lack of sample size and the lack of sophisticated route running film leaves questions in that aspect of his overall game.

Overall, Rhamondre Stevenson is a day three or later running back prospect. Stevenson has all the skills to succeed in the league, but his physical measurables make many teams cautious about investing a day one or two draft pick. He may even fall out of day three because of his lack of speed. Draft capital and landing spot will be important for Stevenson. He needs the opportunities to succeed, and he needs to greatly improve his speed to keep up to the next level. He can take on a three-down workload, and in the right situation, Stevenson could be set up to succeed.

In dynasty, Stevenson is worth a stash and worth a look in the 3rd round. He may even move up on draft boards depending on his draft capital and landing spot. He can be the workhorse running back for NFL teams, and in fantasy, that is a plus. Stevenson could be a diamond in the rough for many fantasy managers in the third round if he gets the opportunities and an important role for an NFL team. The third round will always be a dart throw in any fantasy football setting, and taking a shot on Stevenson could be rewarding, depending on the upcoming NFL draft. Stevenson will most likely be a long hold with a high upside.

Make sure you subscribe to the #NerdHerd, where you get exclusive content, dynasty/rookie/devy rankings, buy/sell tool, and a bonus podcast too. Dynasty Nerds also recently launched the #DynastyGM tool, which is a complete game-changer in the fantasy industry. Click here for a free trial. We indeed are your one-stop-shop for all your fantasy football needs!