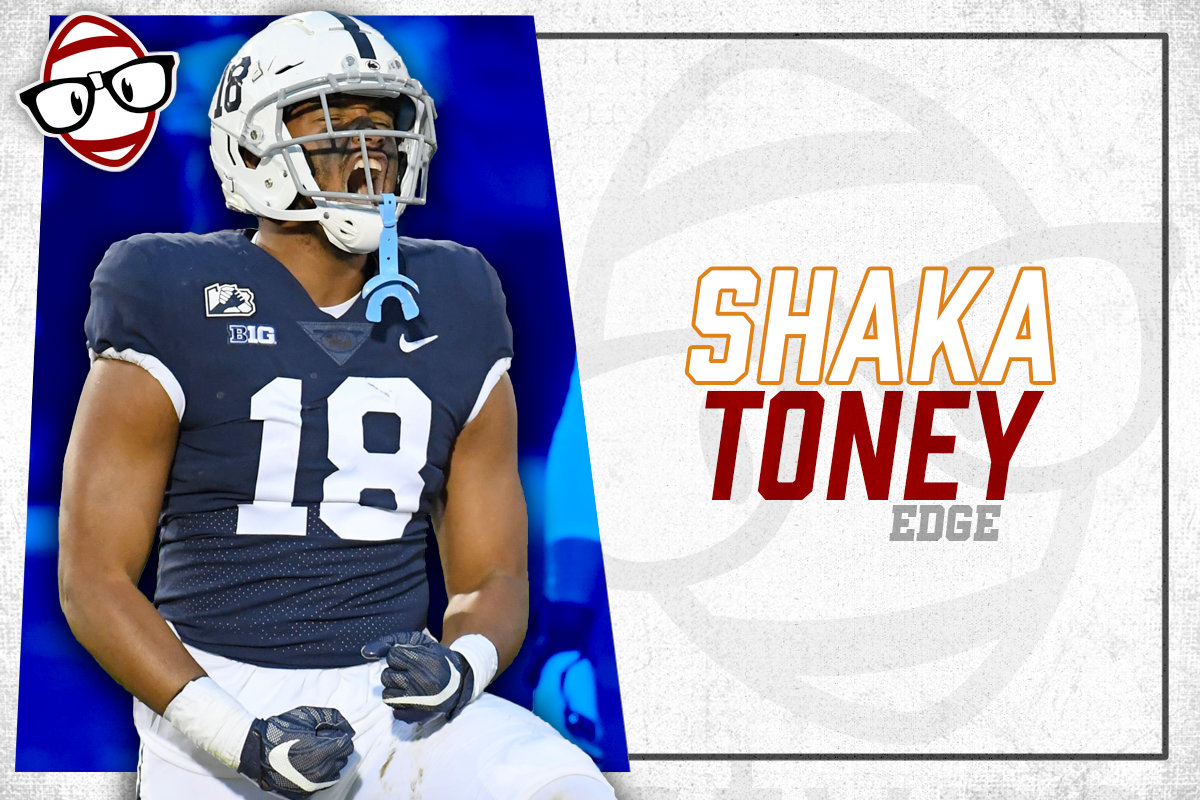 Shaka Toney is a native of Philadelphia, Pennsylvania who attended Imhotep Institute Charter School. Toney finished his senior season being named as the Pennsylvania Football News Class AAA Defensive Player of the Year, he also led his team to an undefeated 15-0 record while racking up 21 sacks. Toney was ranked as a three-star recruit by 247sports.com and committed to Penn State in 2015.

The collegiate profile for Toney wasn’t all that encouraging. He showed flashes of consistency over his four years but just never seemed to put it all together. The Penn State EDGE rusher managed at least 3.5 sacks in every season and averaged just over seven tackles for loss a season. Toney’s 20 career sacks rank as 17th best in the Big Ten since the 2005 season according to sports-reference.com.

Shaka Toney managed to collect 20 sacks for the Nittany Lions, he was used heavily in the role of a pass rush specialist. His tackle numbers have never been particularly good, he managed just 11 tackles over 40 college games. Toney relied heavily on impact plays for fantasy production with 25 impact plays (20 sacks, 4 forced fumbles, 1 fumble recovery). The Penn State product has a bright future if he can bring those plays to an NFL defense.

Shaka Toney uses his quick get-off to get upfield fast and set up his pass rush move. He has a good bend and keeps his pads low to make life difficult on opposing offensive tackles.

Toney can be pushed off the ball and get lost against the run. He doesn’t appear to play with great strength or physicality you would hope to see in a starting EDGE in the NFL. He did however get after ball carriers with his length and speeds from the outside. Toney’s lateral quickness allows him to get down the line fast and find the runner even when the play isn’t coming to his side.

Toney was ranked as the number two outside LB in the 2016 recruiting class by scout.com. It’s very noticeable how uncomfortable Toney has looked in coverage at times during his career with Penn State. He was most effective with his hand in the dirt, which I expect to be his role in the NFL. Toney did test well at the Penn State pro day (no surprise) but he is very raw in terms of being a 3-4 standup LB for an NFL team.

Shaka Toney has produced well for Penn State, his 20.5 career sacks are good for 8th all-time in school history. He showed improvement being named second-team All-Big Ten as a junior and leading the Nittany Lions in sacks (5) while being named First-team All-Big Ten in 2020. Toney was no stranger to creating havoc in the Big Ten conference. He recorded five games of at least two sacks in his 47 career games.

Three teams I have identified as potential fits would be the Kansas City Chiefs, Los Angeles Chargers, and Houston Texans. All three teams can use a developmental pass rusher with the kind of speed Toney brings. The Penn State pass rusher can use some time to develop and he will likely be given that opportunity if he lands with one of these teams. Toney has enough speed from the outside it will be huge for him to start learning counter moves and pass rush techniques to get after quarterbacks more consistently.

Shaka Toney may have a similar season as a rookie to his former teammate Yetur Gross-Matos of the Carolina Panthers. Gross-Matos finished with just over 70 fantasy points as a rookie, good enough for DL174. Likely, YGM never made it off of taxi squads in most dynasty leagues but he showed enough upside to keep him on your deep roster. Toney is a player who has clearly shown he can get in the opposing backfield and make plays, that’s exactly what we are looking for as dynasty managers deep in rookie drafts.

Keep up with all the last-minute rookie profiles as we are just weeks away from the NFL draft. We will be releasing another IDP-only rookie mock draft very soon. The dynasty nerds IDP has you covered as we get deeper into the off-season and rookie drafts are approaching. Keep building those dynasty teams as we get your teams ready for a championship run in 2021.