Shi Smith is the next in line of intriguing Wide Receivers heading to the NFL Draft out of South Carolina. @DyanstyWildcat takes a closer look at Smith’s film to see how he stacks up against the rest of his peers. 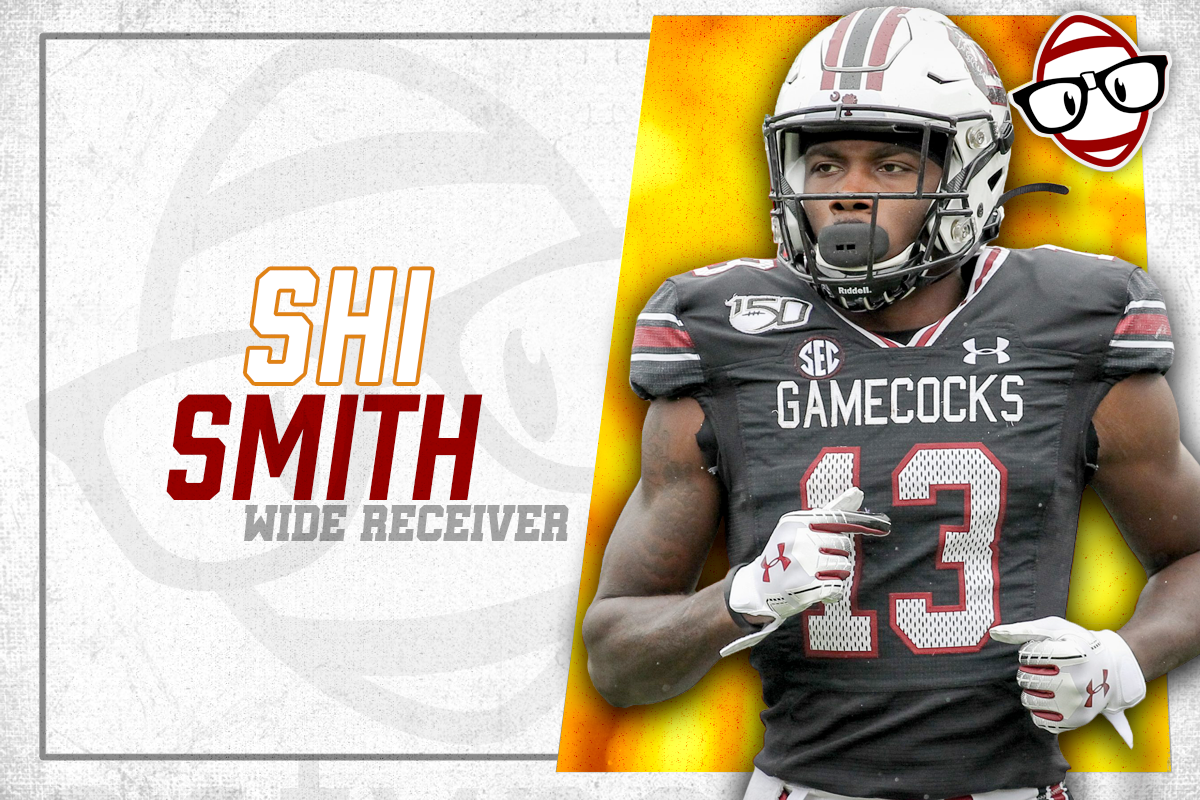 University of South Carolina (USC) Wide Receiver (WR) Shi Smith is an interesting prospect in this year’s NFL Draft. His hype train is already beginning to pick up steam in the dynasty fantasy community, but is the hype warranted? Let’s put our fantasy goggles on and see what all the fuss is about.

Smith is a South Carolina prospect through and through. He was born in Union, South Carolina, and attended Union County High School. During his four years there, Smith developed into a four-star prospect. In his Junior season, Smith exploded. A stat line consisting of 1,337 receiving yards and 17 receiving touchdowns (TD) off 54 catches drew recruiters’ interest across the nation. Smith encountered a few hurdles in his senior season when he increased his reception total to 67 but had a drop off in yardage (907) and TDs (10). Still, USC came calling, and Smith elected to stay in his home state for college.

At USC, Smith became involved in the offense immediately. He played in all 12 games during his freshman season. He concluded the year with 29 receptions, 407 receiving yards, and three TDs. The next season, Smith once again played in all 12 games and increased his receptions (45), yardage (673), and TD (four) totals. That growth didn’t continue in his junior season, though. Smith suffered an injury that led to him missing two games. Still, he posted a stat line of 43 catches, 489 receiving yards, and two TDs. He managed to get back on track during his senior season, despite a revolving door at Quarterback (QB). Smith finished his career at USC, with a career-high in receptions with 57. He also tied his career-high in TDs with four.

While Smith didn’t set the world on fire at USC, it’s worth noting the reason why that’s the case. For most of his career, Smith had to compete for targets in a crowded WR corps with an offense run by limited QB’s. In his freshman and sophomore campaigns, he played behind WR’s Deebo Samuel and Bryan Edwards. In his Junior season, he played alongside Edwards. So, his first and only season as the leading man was 2020. If not for COVID-19 and a shortened schedule, it’s likely his numbers would’ve stuck out compared to his previous seasons.

Several traits stick out when watching Smith’s film. One is more surprising than the other, but they both make him an intriguing prospect for different reasons.

This is a fascinating part of Smith’s game. He has a knack for locking onto the ball and following it into his hands. It’s all over his film! That’s an art form lost on many of today’s WRs. Whether it’s a 50/50 ball that he tracks 40 yards downfield or a ball that gets tipped as he tries to reel it in, he always manages to come down with the ball in his hands. Here’s an example of what I’m talking about:

A highlight like this embodies what I’m talking about with Smith. He manages to locate the ball mid-air, track it to his position, and manages to beat the cornerback (CB) to it. Smith tips it back to himself away from the defender, but that’s not all. As the ball comes back in his direction, Smith maintains his concentration on the ball as he free falls. Then, he snatches it out of the air and pulls it into his body. What was once a poorly thrown ball turns into a massive reception for Smith.

A player’s ability to make plays like this would usually transition to the NFL nicely. However, I don’t know how Smith can make plays like that at the next level. One reason for that is strictly because of his size. Smith is only 5′ 10″ and weighs 190 pounds. He isn’t a tall WR with a huge catch radius or a WR that will bully a CB into submission. Instead, Smith has a small frame and a limited catch radius. If he were a supreme athlete by NFL standards, he could overcome the size issue. However, he isn’t, and that’s concerning.

The second best attribute for Smith at USC was his route running. The routes he ran looked polished. There was little to no wasted movement, and he changed directions quickly. On several routes, he fooled the defender and managed to create some separation on a pass. Here’s just one instance of Smith’s route running acumen:

You can see that this is a pretty simple concept, but Smith runs it perfectly. He gets the defender to bite on what he thought was a curl route, then utilized his short-area burst to get by him and create a throwing lane.

Route running ability like that is rare to have in college. It gives the player a step up on the competition from day one in the NFL. That’s why so many scouts and fantasy analysts were so in love with WR’s Jerry Jeudy and Justin Jefferson last year. Now, Smith isn’t the same caliber of player as those two are, but it’ll be interesting to see if this gives him a leg up on the other WRs in his class.

I want to start by saying there isn’t another weakness in Smith’s game besides the one I’m about to mention. However, that one is a glaring weakness that can’t be improved.

It stuck out immediately. From the first play I watched of Smith, I knew a piece was missing from his game. Unfortunately, that missing piece is athleticism. It’s such a bummer because I love watching Smith play.

So much of Smith’s game in college was utilizing the athleticism advantage he had on players at that level, an advantage that will be absent in the NFL. I don’t know how he builds on the little bit of separation his routes create when his top speed is slower than a linebackers’ (LB). I don’t know how Smith shows off his incredible ball tracking or concentration when the defender is within a foot of him. He won’t beat them with his length, strength, or jumping ability. When Smith played the University of Florida (UF) earlier this year, I found a play that sums up my entire feelings of him in one clip. Here it is:

Watch as Smith runs a fantastic out route and confuses the defender into thinking he’s going into the middle of the field. The QB makes a quick read, throws it to Smith immediately. Smith plucks it out of the air as his teammate blocks the defender in front of him. Smith turns upfield and has everyone beat. Or so you thought. A UF defender takes a lousy angle initially but is able to recover almost immediately and tackles Smith.

You saw the route running and the great hands, but you also saw his limitations. At the NFL level, that play ends at ten yards, and that’s giving Smith the benefit of the doubt. With the absence of athleticism, Smith has a ceiling that will be hit rather quickly. He’s not going to break off long plays downfield or make incredible catches on 50/50 balls. Smith will always be covered by someone faster, stronger, or longer than he is. There’s no debating that.

There’s a lot I like about Smith’s game. He has excellent hands and runs routes well. He’s not phased by physicality and makes smart plays consistently. However, he’s limited due to his lack of athleticism. That’s why Smith had limited college production and why that’ll continue to be the case in the NFL. As it currently stands, I’ve seen Smith projected anywhere between the fourth and sixth rounds of the 2021 NFL Draft.

Wherever Smith goes, his best chance of success will be as a slot WR. I would like to see him end up on a team with an excellent Offensive Coordinator (OC) that can scheme him open and help get him in some favorable matchups. Smith will also need an accurate QB because of his limited catch radius. The only place that will have those two things next season, where Smith can earn playing time now or in the future, is with the Jacksonville Jaguars.

Their new Head Coach (HC), Urban Meyer, has a record of great play calling at the collegiate level. If he can carry that into the NFL, Smith would benefit as his slot WR. His QB would be Trevor Lawrence, the soon to be number one overall pick in the NFL Draft this spring. Oh, and did I mention there isn’t a lot of competition for that slot role in Jacksonville? That spot would be the best-case scenario for Smith.

Regardless of the landing spot, Smith won’t be a good option for your fantasy teams. To return any fantasy-relevant value in PPR leagues, Smith would have to tally up at least 70 receptions a season. In standard scoring, I doubt he’ll ever be fantasy relevant. That said, you can nab Smith at the end of the third round in most rookie drafts. I’m fine grabbing him there unless he lands on a team with a crowded WR corps.