Could Simi Fehoko prove to be one of the late round surprises in the 2021 NFL Draft? @FFPeeblesChamp has more, and why it could happen 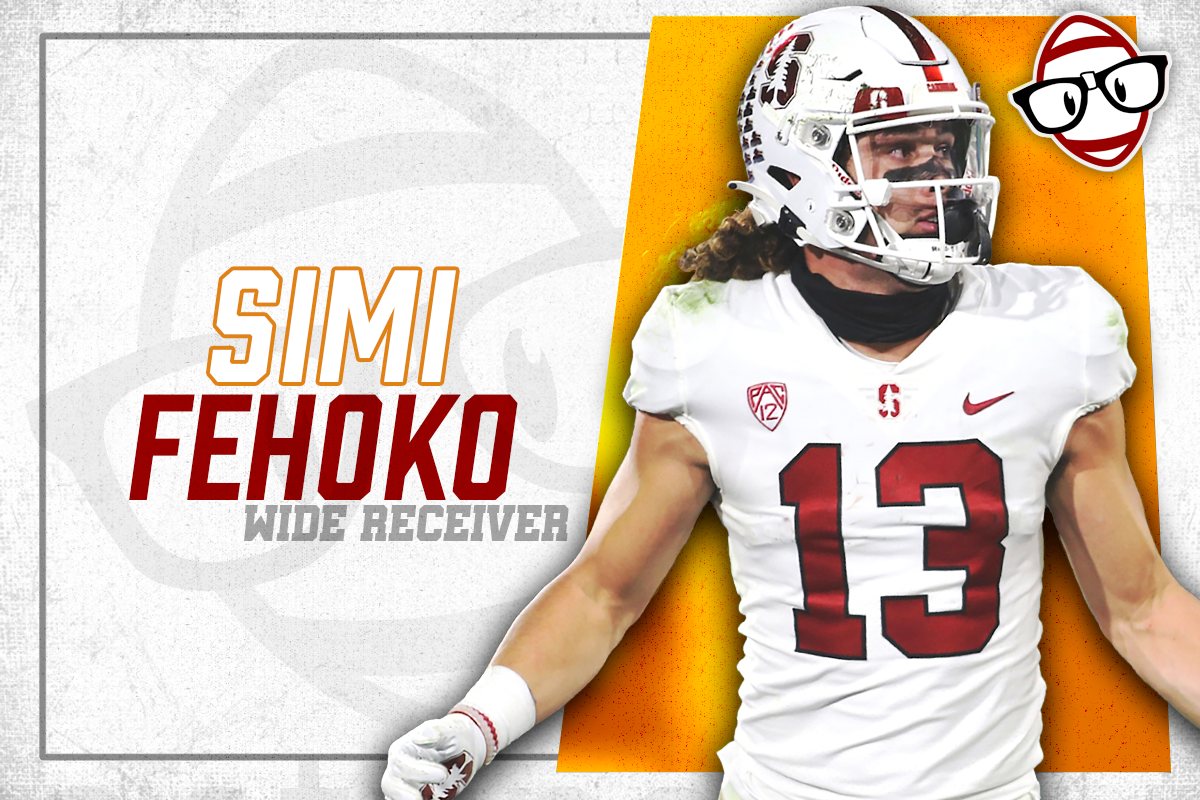 Simi Fehoko only saw the field for 16 games in his college career, starting for four of them. Let’s get the elephant out of the room early and dive into what makes him an enticing prospect. His time at Stanford was limited, but his skills were anything but limited when he was on the field. He’s a big, strong wide receiver with potential; let’s dive into more specifics.

Fehoko was a four-star receiver and attended high school at Brighton High School in Salt Lake City, Utah. He set state records for career receiving yards and career receiving touchdowns, although each record has been eclipsed since. As the 32nd-ranked receiver in the 2016 class, he received offers from Clemson, Michigan, Washington, and Stanford, amongst others. Fehoko had one official visit to Stanford and chose to take his talents to central California.

Fehoko didn’t see the field much his freshman season and became more involved his sophomore season. Despite not starting any games in 2019, he caught 24 passes for 566 yards and six scores. The average of 23.6 yards per reception was first in the Pac-12 and third in the NCAA. A touchdown every four receptions and the reception average highlighted his big-play ability.

In the shortened 2020 season, Fehoko started four games, and his 574 yards ranked first in the Pac-12. All three of his touchdowns came in his final collegiate game. He caught 16 balls for 230 yards in the same game. When he had an opportunity, he showcased what he was able to do. Fehoko was never the focus of Davis Mills and the Cardinal offense, except for his final collegiate game.

At 6’4” and 227 pounds, Fehoko has excellent size, speed, and his strength pops out when watching him on tape. He is close to a complete receiver from a physical traits standpoint.

Fehoko has clocked a 4.39 40-yard dash, and he has a good release with burst off the line. He is quick, and when he’s in man coverage, Fehoko can slip right by defensive backs, and he accelerates quickly.

I had trouble finding examples of pure speed, but it’s evident even on shorter routes like this. Fehoko is quick off the line and out of breaks, which allows him to create separation. He has a long stride and deceptive speed.

In contested situations, he always wins with strong hands and good positioning. He adjusts to the ball and can outmuscle defensive backs with ease.

On this clip, he runs a simple fade route, and the QB feathers it in beautifully. Fehoko jockeys for position, and his right hand is tangled with the corner’s, yet he still makes a great catch. He cradles the ball into his body with his left hand for the score.

This touchdown catch is a great display of the strength as Fehoko “Mosses” the DB. He gains the outside edge and brings down an underthrown ball right over the defender’s helmet.

It kind of mixes in with speed, but Fehoko is incredibly dangerous after the catch. He has decent moves in the open field but doesn’t have agile, abrupt movements to create with the ball.

Stanford didn’t scheme ways to get him the ball often, and I don’t know why. This play is a simple screen, and you see the speed I mentioned above once he gets the ball. He’s not elusive but runs smart and can gain yards quickly.

The lack of experience is the biggest detractor in Fehoko’s profile, and it shows. He is raw and doesn’t have a developed route tree. Stanford used him in the slot for over 200 snaps, and he saw over 400 from an outside spot. Due to his size and physicality, outside seems like a better fit in the NFL.

Fehoko also had six dropped passes on 59 targets, a slightly alarming rate. Three drops were on quick passes within ten yards and could be more a technique issue – not getting his head around fast enough.

Athletic, big, fast – Fehoko checks off the boxes many teams want from a physical standpoint. He is strong and not afraid to mix it up with defensive backs, fitting the typical outside receiver’s mold.

The former Stanford wideout will likely hear his name called on the third day of the NFL Draft due to lack of college production. Being drafted later, he may not have many chances to prove himself. If a team reaches for him and drafts him in round four or sooner, he may be afforded more of an opportunity.

I have participated in several rookie mock drafts, and he isn’t being taken in the first four rounds in them. It will take a good spot with opportunity or someone who believes in the ability to see him drafted in rookie drafts. I would not hesitate to take a shot and draft Fehoko in the fourth round. The upside and promise are there, especially over players such as Tutu Atwell, Dazz Newsome, and Whop Filyor.

The 2021 class is deep and has receivers of nearly every archetype. Very few blend Fehoko’s size, speed, and strength; there is a spot for him in the NFL, and if he is given a shot, it could be one of the biggest surprises in the draft class.