@Glosser13 takes a look at USC DB Talanoa Hufanga’s potential as an IDP producer ahead of the NFL Draft. 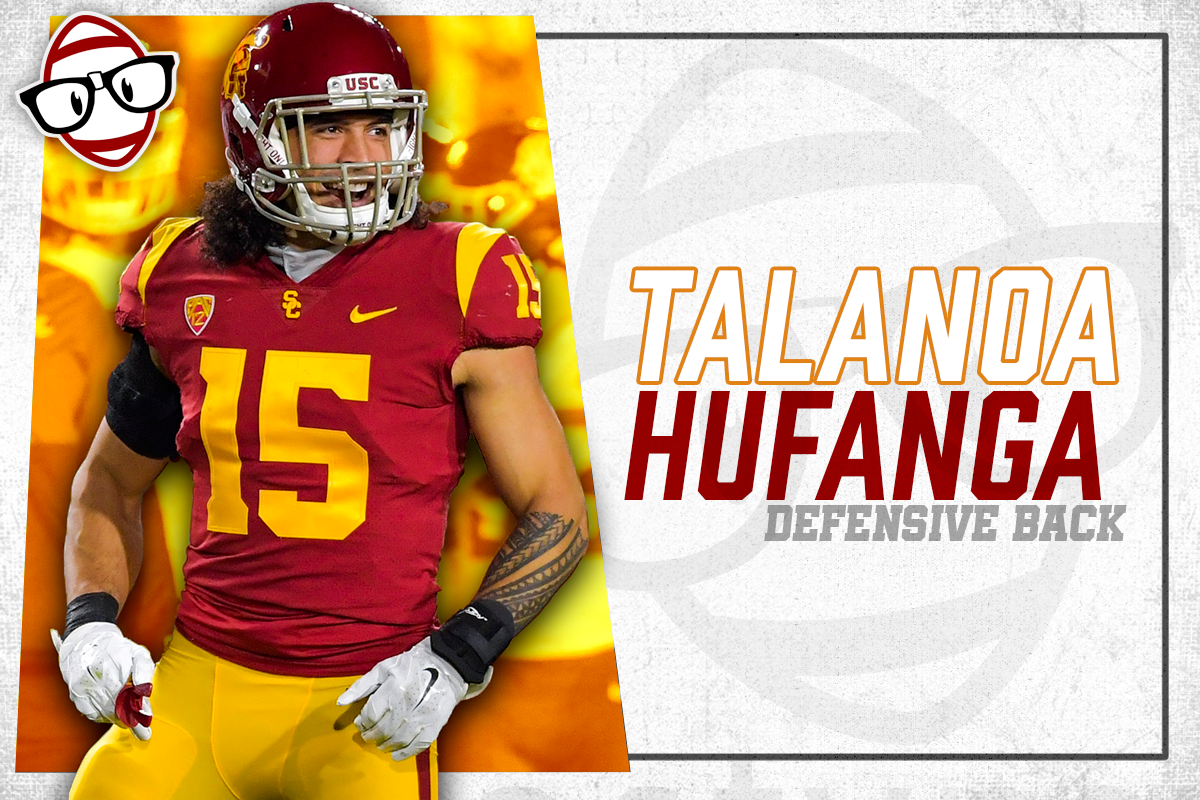 Talanoa Hufanga is a native of Corvallis, Oregon, and attended Crescent Valley High School. Hufanga was a four-star recruit with a 0.9571 247sports composite score. He ranked as the #2 athlete and the #1 overall player from the state of Oregon. Despite an offer from the Oregon Ducks, Hufanga chose to attend USC.

He was a multiple position star at Crescent Valley, playing QB, RB, and WR on offense and safety on defense. Hufanga would win the Polynesian High School Football Player of the Year in 2017 and would be the first person in his High School’s history to be named to the 2018 U.S Army All-American game.

Hufanga would see five starts in his freshman season before a season-ending injury. He was finding his way as a reliable fantasy producer, and in his last five games of 2018, he managed five tackles or more in every game, including 23 tackles and three tackles for loss in his last two games played. He saw most of his starts come at strong safety, which earned him a named starter heading into his sophomore seasons.

He started ten games at strong safety and emerged as a top defender in 2019. Hufanga would have at least six solo tackles in seven of those games, including having double-digit tackle performances in five of those games. He would finish second on the team in tackles as a sophomore, and his 58 solo tackles were good for the eighth-best in the PAC-12 conference.

Hufanga was at a disadvantage entering the 2020 season as much of the PAC 12 played only six games. He would lead the Trojans in tackles (62) also finished with the most solo tackles (40) in the conference. Hufanga was named Consensus All-American and PAC 12 Defensive Player of the Year. Although his tackles dipped from 2019 to 2020, his impact plays did not. Hufanga finished number one overall in interceptions (4) and interception yards (90). He also finished eighth in the conference in sacks (3) and second in forced fumbles (2). Hufanga had 48 fantasy points alone on impact plays as a Junior. If he could produce like this for the NFL team he gets drafted to; dynasty managers will be thrilled.

Talanoa Hufanga looks the most comfortable around the line of scrimmage. He forces offenses to account for him in their blocking scheme. His ability to play box safety or big nickel LB should be a huge plus to NFL teams.

Hufanga is in man coverage on the TE with a five-man pressure. The QB looks to his hot read, and Hufanga reads it perfectly and starts breaking on the route before the ball even leaves the QBs hands. Plays like this show me he can play a hybrid sub package LB role if needed.

Hufanga’s ability to be a threat to opposing offenses is a reason why his production is so good. His presence as a zone defender allows him to read and react and eliminate crossing routes. The USC safety shows the ability to get around offensive tackles and create pressure in the offensive backfield.

This is textbook from the USC safety. He sits on this route the whole time and baits the QB to throw it. The acceleration and burst once he makes the interception flashback to his offensive days in high school. Excellent play to show Hufanga is versatility as a coverage safety.

Although the production is there, it’s easy to turn on the tape and walk away unimpressed with Hufanga as a prospect. He has produced some high-volume tackle games, but unfortunately, his poor angles have given up some big plays and touchdowns due to lack of speed.

Hufanga has unfortunately dealt with multiple collarbone injuries and an injured shoulder, all on the same side. He also suffered a concussion as a Sophomore which costs him to miss games. It’s never a good sign when a player has to deal with college injuries; it’s more concerning when the injury is a recurring one.

The 2021 NFL draft has a fairly deep safety class with plenty of upside players. Talanoa Hufanga is one of those players. His on-the-field production is nothing to scoff at, as he has made big plays on a talented defensive unit over the past three seasons at Southern California.

Hufanga projects as a day 3 pick in the NFL draft, He stacks up as a top 10 safety and is very versatile, which allows him to play in multiple schemes. I would expect him to start on special teams and eventually earn himself a starting safety role.

There are a few teams that could use a player like Hufanga without paying a premium price. The Cowboys, Vikings, and Jaguars all have multiple picks in the fourth round and can use safety help. Hufanga may find himself in a spot where he could compete for playing time in the off-season if he lands with any of these teams.

The Atlanta Falcons are the final team I’m looking at who needs their secondary. The Falcons have lost both Keanu Neal and Ricardo Allen in free agency and have three picks in the 5th round. Hufanga could find himself in a wide-open competition for a starting role with the Falcons defense.

Hufanga offers enough upside as a playmaker to be a reliable dynasty asset if he’s given the opportunity as a rookie. Dynasty managers should temper expectations and expect him to be a stash player in year one. The on-field production paired with a potential good landing spot, and he could surprise some people as a rookie.

The 2021 NFL Draft is rapidly approaching; the Dynasty Nerds IDP team has you covered with rookie profiles on nearly all of the prospects who will be drafted in rookie drafts. Keep an eye out for IDP reaction on NFL free agency and much more. Keep building those dynasty super-teams as we all get ready for another championship run.