Former FSU WR Tamorrion Terry has had a tumultuous collegiate career. @tristancook_ is here to tell you why he could be the steal of your rookie draft! 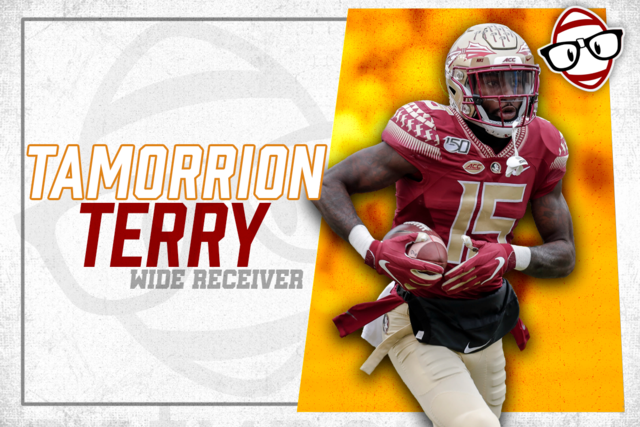 Tamorrion Terry is one of the more perplexing prospects in this class. He is a former three-star recruit out of Georgia and has all the physical traits you look for in a prototypical outside WR. Terry has been one of my favorite prospects since his impressive freshman year in 2018. He has a rare combination of size and speed that is coveted by NFL teams.

However, some inconsistencies in his play and some questions surrounding his departure from the Florida State program have made me need to take a closer look. Terry returned to FSU for the 2020 season in hopes of improving his draft stock, but in all likelihood, he has actually seen his stock drop this season.

Tamorrion Terry came into the ACC and made an impact right away. Despite only catching 35 passes in his freshman year, he managed 744 yards and 8 TDs. But, in 2019, Terry broke out for the Seminoles. He hauled in 60 passes for nearly 1200 yards and 9 TDs.

He looked like he was on his way to being one of the top receivers in the 2021 class, but things changed a bit in 2020. He had a big game against Notre Dame with nine catches for 146 yards and a TD early in the season but battled injuries and only ended up playing in 6 games before leaving the team.

The circumstances around his departure from the team were a bit cloudy, there were some reports that he and the coaching staff were at odds, but regardless, he left the team and has since been preparing for the 2021 NFL draft.

I wanted to watch as much tape as I could on Tamorrion Terry, so I hopped into the Dynasty Nerds Film Room and watched every single one of his games. If you haven’t checked it out, I can’t recommend it enough. It’s a great resource for watching isolated, condensed film on dozens of prospects. But, let’s get to what I saw on Tamorrion Terry.

The biggest thing that stood out while watching Terry’s tape was his speed. More specifically, his combination of size and speed. He regularly displayed a gear that not many other WRs in this class have. He uses his speed well to get behind the defense or run away from defenders after the catch.

But Terry isn’t just a speed WR. He showed some solid ability to make defenders miss and fight for extra yards after the catch. Additionally, at 6’4”, he has a big frame and does a good job making contested catches and adjusting to the ball in the air.

There are, however, some serious concerns that I have about Tamorrion Terry. The first of which is his issue, at times, with catching the ball. I know I just talked about his ability to make contested catches, but he also dropped some easy passes that he absolutely should have caught.

It looks to me like it is an issue of concentration drops rather than the ability to catch the ball, but the quickest way to lose playing time is if you don’t catch the ball when it’s thrown to you, so I am definitely a bit concerned. Some of his dropped passes could also have been due to his tendency to body-catch at times. With a frame like he has, I would like to see him go up and high-point the ball more than he does.

My other concern with Terry is his apparent inconsistent play and readiness at times. There were far too many occasions where it looked like he wasn’t ready for the snap of the ball or gave up on a route. It was too easy to tell when a play wasn’t designed for him based on his effort level on that play.

Not Ready at the Snap

I’m still a bit torn on Tamorrion Terry. He has two things that you can’t teach: size and speed. I think he has a chance to be as good as any receiver in this class if he fully realizes his potential. But there’s a lot of work to be done if he’s going to get there. I am not sure how NFL teams will view him after his lackluster 2020 season.

He has the physical tools to be a dominant WR at the NFL level but has displayed enough inconsistencies to make me somewhat hesitant. In this deep draft class at WR, I wouldn’t be shocked if Terry dropped to an early day three pick, but I think he likely goes on day two. I am still a believer in Tamorrion Terry, and if he can shore up his drop issues, I think the sky’s the limit.