Gage Bridgford (@GbridgfordNFL) looks at one of the talented wide receivers in this year’s draft in Florida’s Trevon Grimes. 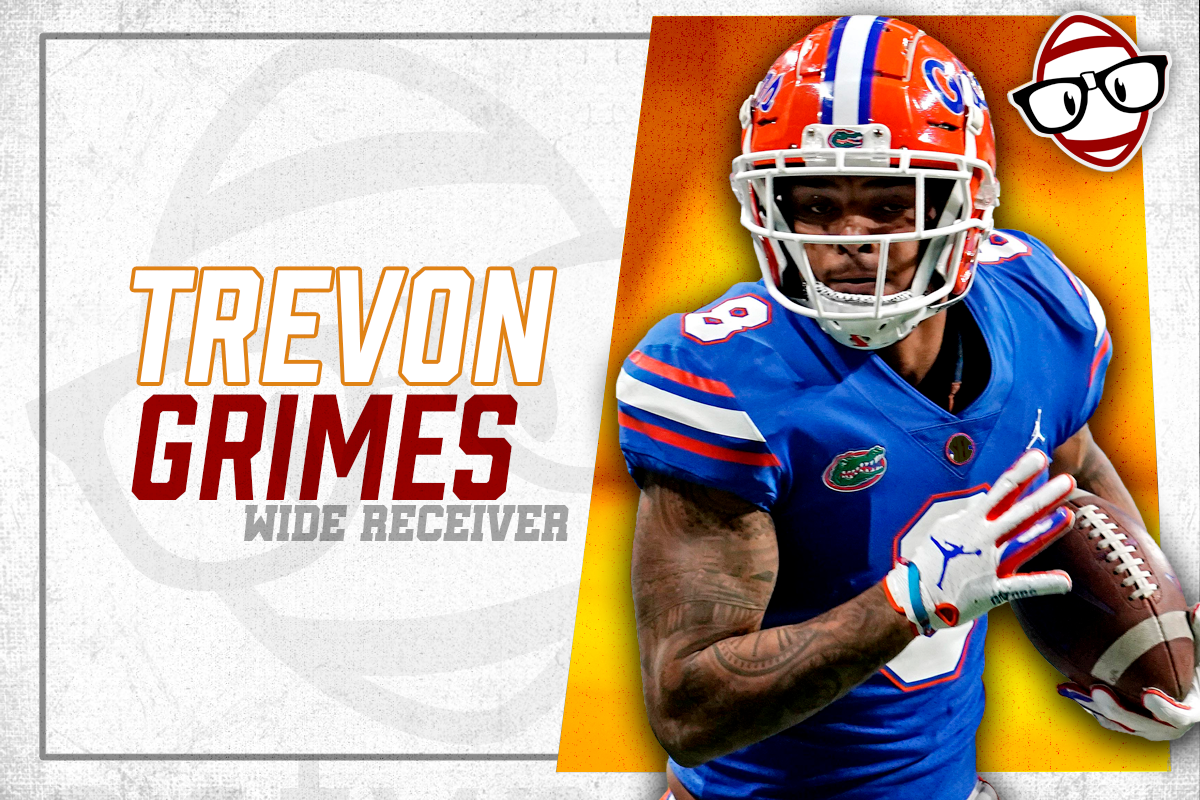 A 5-star wide receiver out of Fort Lauderdale, Florida, Trevon Grimes was the fourth-ranked wide receiver in a star-studded recruiting class. Other receivers in the class were future first-round picks Henry Ruggs, Jerry Jeudy, CeeDee Lamb, along with several other talented pass-catchers. After committing to Ohio State during the fall of his senior year, he proceeded to tear his ACL, three games into the year. He was averaging over 90 receiving yards per game with over 18 yards per reception prior to the injury.

While he doesn’t always show it on film, Grimes was a budding track star during his early years at St. Thomas Aquinas High School in South Florida. After finishing second in the 4A 300M high hurdles during his freshman year, he went on to win that event the following year before transitioning fully to football as a junior. Ultimately, that was the best call, as his recruiting stock rose rapidly during that junior season.

After transferring from Ohio State following his redshirt-freshman season, Grimes showed he was willing to play in a crowded receiver room by transferring to Florida. Also playing receiver at Florida were future NFL players such as Van Jefferson, Tyrie Cleveland, and Freddie Swain. Grimes played with two possible first-round picks this season in Kadarius Toney and Kyle Pitts.

Unlike some of the receivers at the top of this draft, Grimes is going to be drafted less off of stats and more off of traits. His career-high in yards, receptions, and touchdowns all came during his final season when he came down with 38 receptions for 589 yards and nine touchdowns. Those marks were all third on the team behind the aforementioned Toney and Pitts who put forward impressive years of their own.

Grimes was never really the downfield threat that one might have expected after the prowess he showed as a track star in high school, but he could do a little bit down the field with an average reception of 14.9 yards during his three seasons at Florida. It would have been interesting to see what his level of success would have been had he played in a system that heavily featured him compared to the role that he played at Florida.

The main area that he will be able to help NFL teams is the red zone where his impressive size is going to be coveted by teams. At nearly 6-foot-4, Grimes has the ideal size but must put up explosive numbers at the Florida pro day to really boost his stock. Nine touchdowns as a No. 3 receiver proves he can make plays.

Grimes isn’t the slowest wide receiver in this class, but he’s far from the fastest. One of the ways he makes up for that is by using his size to maximize his catch-radius. On this play, this ball is put in a spot where he’s the only one that can get to it. Most receivers wouldn’t have even been able to catch this ball in that spot. When a quarterback needs a bailout receiver on a play, Grimes is going to be able to give them that opportunity down in the red zone.

Toney is the receiver that gets credit for having slick moves at the line of scrimmage. He’s shifty, while Grimes is seen as the powerful, big-bodied type of receiver. On this play, he leaves the corner grasping at air and down on the ground. If it weren’t for Pitts also being open on this play, Grimes would have been hit for a walk-in touchdown by his quarterback. He’s learned how to use subtleties at the line of scrimmage to generate separation in order to make up for his lack of shiftiness.

With his size, Grimes is expected to be a good blocker as a wideout. He doesn’t disappoint as he knows how to use that size well to block opposing defenders. It enables him to lull defenses into a false read of the play call. On this play, he’s blocked on wide receiver screens several times throughout the game which quickly draws the defense in. Grimes slips right past him for a wide-open reception. He knows how to block, and he’s effective in that area while also knowing how to find open space on these plays.

Strong route-running is essential for bigger wide receivers without elite speed. Surviving on jump balls isn’t a recipe for long-term success at the NFL level, and Grimes demonstrated this at the Senior Bowl. He sets up the corner with a route to the boundary, and, without losing speed, he goes back across the field. He’s not going to do this to all corners, but it’s great to see that he is able to run crisp routes at his size.

Grimes is unlikely to become a WR1 in the NFL, but there is a role for him at the next level. One possible role for Grimes to fill is that of Allen Lazard of the Green Bay Packers. Lazard has some jumping ability, but it’s not his only skill. He’s also a strong blocker for a wide receiver, and he scored a touchdown against the Los Angeles Rams on a near-identical type of play that Grimes had on the third play in the film section.

In this draft class, he’s likely going to be taken on the third day of the draft due to the other players available at the position. If there were an injury to occur to one of the guys ahead of him on the depth chart, he would be able to step up and fill in, but he’s unlikely to bring high-end production unless he was drafted into the perfect situation.