The top free safety in the 2021 class is ballhawking Trevon Moehrig. @FFPeeblesChamp highlights what makes the former Horned Frog so good. 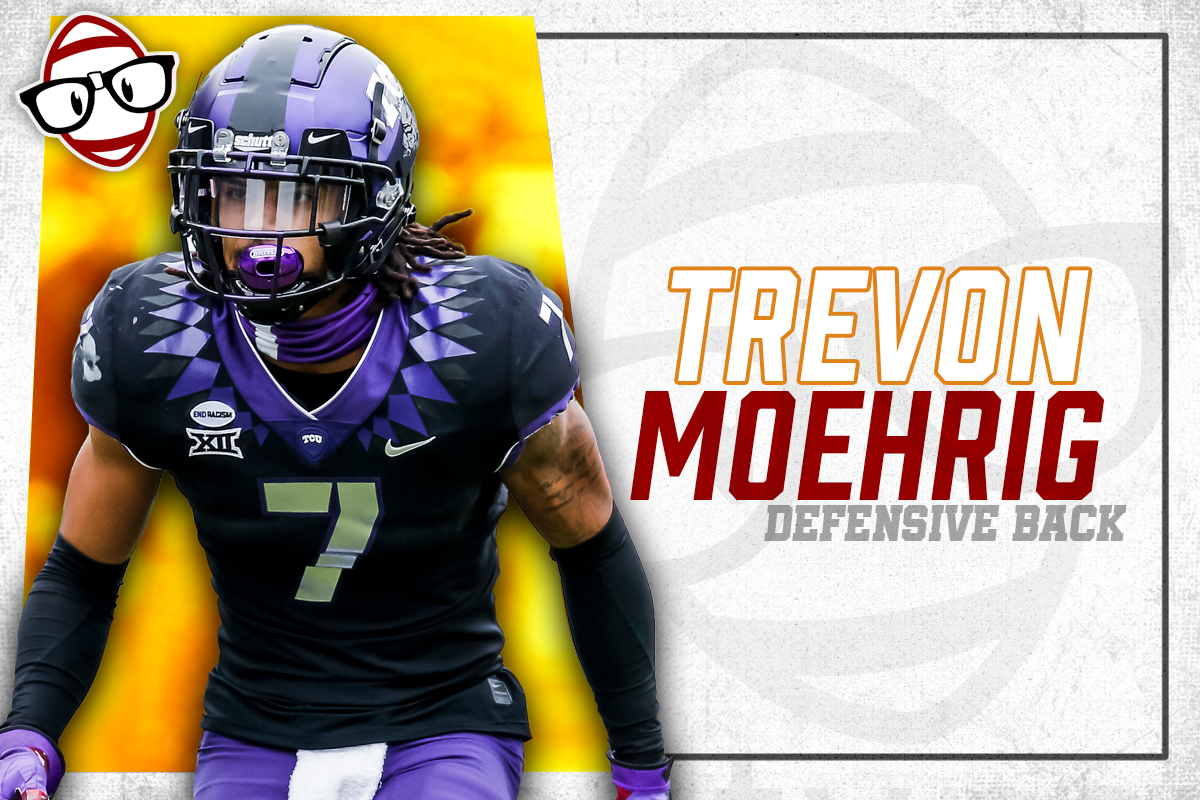 Trevon Moehrig is one of the most impressive safety prospects in the 2021 class. He is an athletic specimen with phenomenal acceleration and closing speed. At TCU, he formed the best safety tandem in the country with Ar’Darius Washington, and he has tremendous upside.

Moehrig played his high school ball in Spring Branch, Texas, a four-hour drive south from Fort Worth. He was a three-star recruit who received 19 offers from many schools, including Georgia, Minnesota, Texas A&M, and Stanford. He was the 47th-ranked cornerback in the 2018 class per the 247Sports composite.

Moehrig earned praise from coaches and staff for his maturity on and off of the field. He plays hard on the field and approaches the game with humility and respect. He’s a student of the game and studies to improve his game.

Due to injuries, Moehrig was thrust into a starting role his freshman year. The job was his, and he never looked back. During his sophomore season, he emerged as a playmaker with four interceptions and a pair of forced fumbles. He added in 62 tackles, and 11 passes defended, which ranked fourth in the Big 12.

Moehrig won the Jim Thorpe Award in 2020, awarded to the nation’s top defensive back. He ended the season with 47 tackles, two interceptions, and nine passes defended. The numbers weren’t indicative of how much he alters the game. Offenses have to account for where he is, his instincts and football IQ are off the charts.

At 6’2″ and 205 pounds, Moehrig is a ballhawk with great instincts. He is fluid and has deceptive speed. It allows him to cover a lot of ground quickly and make disruptive plays.

The physical trait which pops most for Moehrig is his acceleration. He reads a play and sees where he needs to be, and then gets there quickly. His closing speed is ridiculous.

This play is the perfect example of his acceleration and closing speed. He sees the play developing, and within just a few seconds, he is fifteen yards upfield, dropping the runner for a big loss.

The clip here is fairly similar but showcases the closing speed again. Moehrig sniffs out what is happening and gets to the ball carrier to drop him for a short loss. He can cover a bunch of real estate quickly.

Another physical trait that stands out is how fluid and how well Moehrig moves. He sifts through traffic, changes directions without losing speed, and shifts through gears while running effortlessly.

The movement skills allow him to hang with receivers and backs on routes. Here, he follows the receiver downfield, then twists and contorts to make an interception. One of the most impressive things he does is in situations like this; Moehrig is incredibly aware and rarely gets called for pass interference.

This time the tight end is his assignment, and Moehrig’s movement skills are on full display. He quickly pivots to follow him and stays step for step with him downfield and along the sideline. It looks like an easy play for the star safety, and he makes it look so smooth.

Moehrig understands what he is tasked to do as a free safety. His intelligence makes him so damn good. He is always watching the quarterback and plays develop, he knows where he is expected to be. The knack he has for then recognizing where he needs to be is uncanny.

This play is the bread and butter of what you want your free safety to do. Moehrig recognizes the throw downfield and quickly saunters over to make the interception over the top.

The clip here is a few plays in a row in which Moehrig shoots upfield to swat away a pass. I could have put together a ten-minute video of these types of plays alone. They may count as a pass defended, but these types of plays are mainly unheralded. His IQ and play recognition make him the top free safety in the class.

The thing which stood out when breaking down the film as far as weaknesses were mostly in run support. Moehrig’s tackling is not the most sound, and his technique needs work. There were several instances of him taking poor angles and leaving an open field for ball carriers. His game, as a free safety, doesn’t have a lot of holes and few weaknesses.

Moehrig checks off every box teams would want as a free safety. He has instincts, intelligence, and a knack for making big plays. He shows enough in run support and has the range to cover the whole field, and in a hurry, if need be.

On April 29th, Moehrig will hear his name called to the podium in the latter half of the first round. I really like Washington as a fit, and they have an emerging defense loaded on the front half with a need for free safety.

As far as an IDP asset for fantasy football, Moehrig will likely be a latter half of the second-round rookie pick. Free safeties tend to have less value with fewer tackles, but the big plays can be a jolt for your squad. Moehrig will give you a few of those for sure and should be one of the better free safety options from day one.

It was a ton of fun to watch Moehrig film, not only for the Horned Frogs uniforms. The way he attacks the ball is infectious and his teammates fed off of it. He has great character and plays the game the way you want to see it played. Moehrig is going to be one of the top free safeties in the NFL.