Who doesn’t love gettin’ “nerdy” with 2021 rookie prospects? @KayneRob brings you the details on what to expect of NDSU star QB Trey Lance. 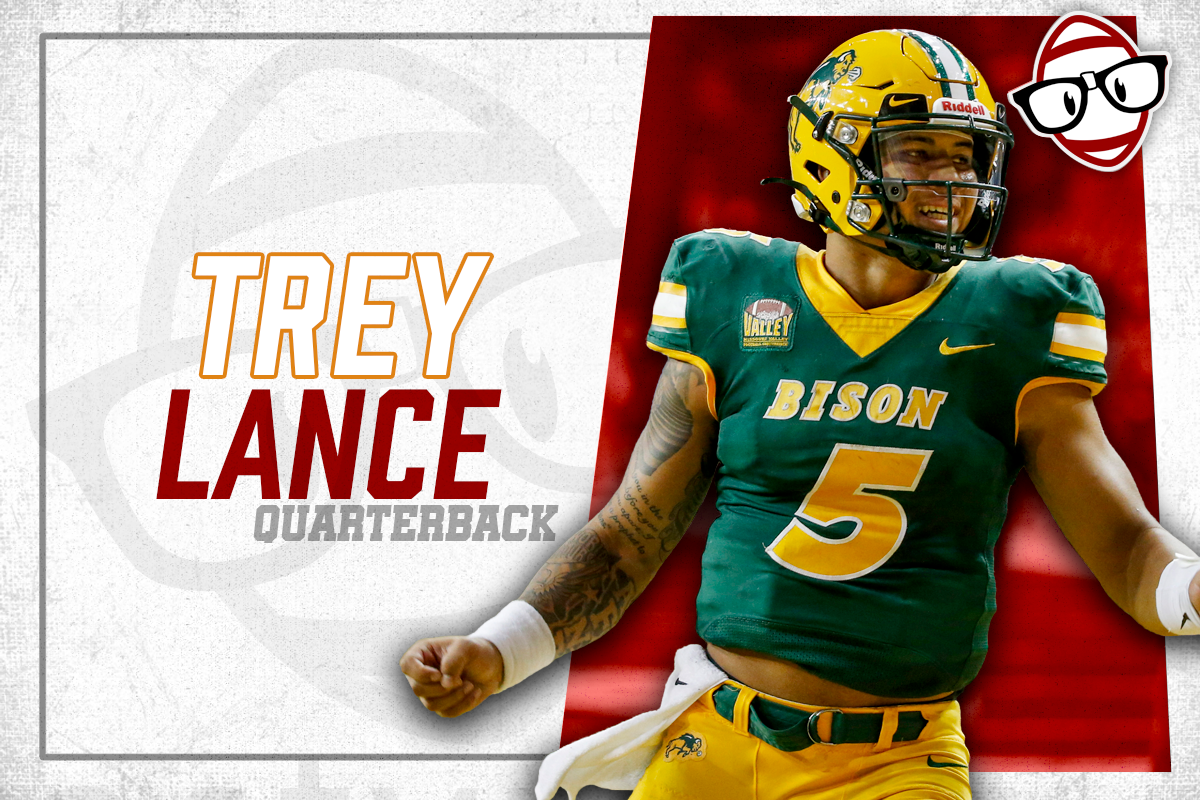 From virtual unknown to possible top ten NFL draft pick, Trey Lance has had a significant evolution in such a short amount of time, but will his skillset transfer over to the NFL?

As one of the youngest QBs in this draft class, Lance boasts great measurables at 6’4″ 226 lbs. Trey was a three-star recruit and a Minnesota native, who stated in an interview with Chase Goodbread at NFL.com. He had every intention of attending the University of Minnesota until it was known that Coach Fleck preferred him to play safety. In fact, Lance wasn’t considered a QB prospect by most Power Five football programs.

Trey Lance attended NDSU, one of the handful of FCS schools that offered him a QB scholarship. Trey redshirted his true freshman year and started his only full season as a redshirt freshman. Lance completed 67% of his passes for 2,786 yards and 28 TDs with 0 interceptions during this lone year, an NCAA record for all divisions. Lance also had 1,100 yards and 14 TDs on the ground. During his time at NDSU, Lance brought home the Walter Payton Award, Jerry Rice Award, MVFC Offensive Player of the Year, FCS 1st-team All-American, and 2 FCS Championships.

Although his rushing ability is a strong aspect of his game, Lance’s efficiency as a passer was genuinely incredible. Looking at Sports Reference CFB, of the 102 QBs to play at least nine games in 2019, Trey Lance was 82nd in passing attempts. Despite lower usage in the passing game, Lance has some key stats that jump off the page, including a 180.6 passer rating (4th among QBs in the Nation), 11.7 AY/A (3rd in the Nation), and of course, his TD:INT ratio (first in the Nation).

Overall, Trey Lance is a high-end QB prospect with an incredible ceiling. He likely will not be a day one starter, depending on the team who selects him. Yet, the long-term outlook is extremely encouraging. Although Trey holds more risk and his floor is likely lower than Fields, I believe his ceiling could be greater in both the areas of passing and rushing.

Of course, most folks out there know that Lance has solid rushing ability. That said, the way he runs is nearly RB like. That ability to see the holes allows him to have a high floor if he can be consistent with it. Most importantly, Lance is a tough runner who is smart about protecting his body. He may seek out some contact but makes a conscious effort not to take big hits in most instances. Continuing to do this at the next level will be critical!

Additionally, Lance has excellent mobility moving outside of the pocket while keeping his eyes downfield for the big play.

Nice Touch at the intermediate and deep Levels

Trey has a very impressive deep ball, and many casual watchers will be thrown off by the incompletion shown above. Yet the result of the WR should not take away from the absolute pin-point dime of a pass here. This happened in quite a few games. Lance consistently puts the ball in a spot for his WR to have a higher percentage shot at the ball. These types of throws will be completed more often at the NFL level due to talent at WR. It is the ability on display in college that you love to see with a QB prospect.

Progression reads were by far the trait that was most pertinent to Lance moving quickly up my prospect board. So much so I had two give you two examples. Lance’s ability to get through progressions isn’t discussed enough within the FF community. This trait is a great positive for Trey yet is often flaunted as weaknesses for other QB prospects.

The quick process of multiple reads consistently could make Lance a fast learner at the next level. Pairing this ability with the pro-style under center offense NDSU ran should make the transition much simpler for Trey. The most critical step will then be adjusting to a quicker game speed.

Lance is phenomenal at reading the linebackers and edge quickly to make the right call within the read-option. He is much quicker at making the decision fluidly over his top counterparts in this draft, Fields, and Lawrence. There isn’t the extra hold to read it out but rather a consistent action, which makes defenses buy in more—thus allowing the opportunity for a more significant play on the ground if sold correctly. This ability is why landing with a team that will build directly to Lance’s skillset opens up an opportunity to hold a higher ceiling than Fields in my eyes.

Some of the weaknesses that I see for Lance could be non-factors at the NFL level. Those weaknesses are that he only has one full season as a starter and played in a lower division. Therefore he played against lesser competition throughout his solo year. This could make the transition more difficult since the game speed will be much faster, yet if he can process at a similar rate and effectiveness, his potential is massive.

That said, Lance did seem to struggle with accuracy on the short routes from game to game. The short pass struggles were mainly present on the bubble, rub, and curl routes. Lance tended to fire the ball in very aggressively, often causing him to miss his target low.

The final weakness that could hurt him is if the team that drafts him doesn’t scheme to him specifically. If a team, for example, the Bears, don’t develop an offense around him incorporating the RPO effectively or some QB run options, then his exciting ceiling may end up capped.

Many may see Lance as a “project QB,” but I genuinely believe a fair amount of fantasy players are overlooking him. In the modern-day NFL, a QB with high rushing upside is growing each day as a valuable dynasty asset. Lance not only brings this rushing upside but seems to be heavily underrated when it comes to his arm strength and accuracy. Landing on a poorly coached team could hurt his immediate value and give him a shallow floor, but if the situation is right, I believe the sky’s the limit!

A comparable player I see to Trey in both measurements and play style is Colin Kaepernick, who had very similar strengths. If all goes well early, I believe in the right system; Lance could have a similar ceiling to what we saw with Robert Griffin III pre-injury. Both of those comps may seem lofty, but I believe they are right on par for the potential. Although I have been a Fields fan since he stepped on the Columbus campus, I firmly have Lance slated as my QB2 in this draft class, based on the potential high upside. If you peruse Twitter, you likely have seen this overused phrase regularly over the last month, but for a player like Lance, I will say it this one time only. Trey Lance to the moon!

Subscribe to the #NerdHerd and check out many of the game films for Trey Lance– we have four games, and our team is working on adding more every day! Check out the site to learn more about the 2021 draft prospects.