Colorado State has produced some quality WR’s in the last few years. Is the big bodied Jackson the next CSU star turned playmaker in the NFL? 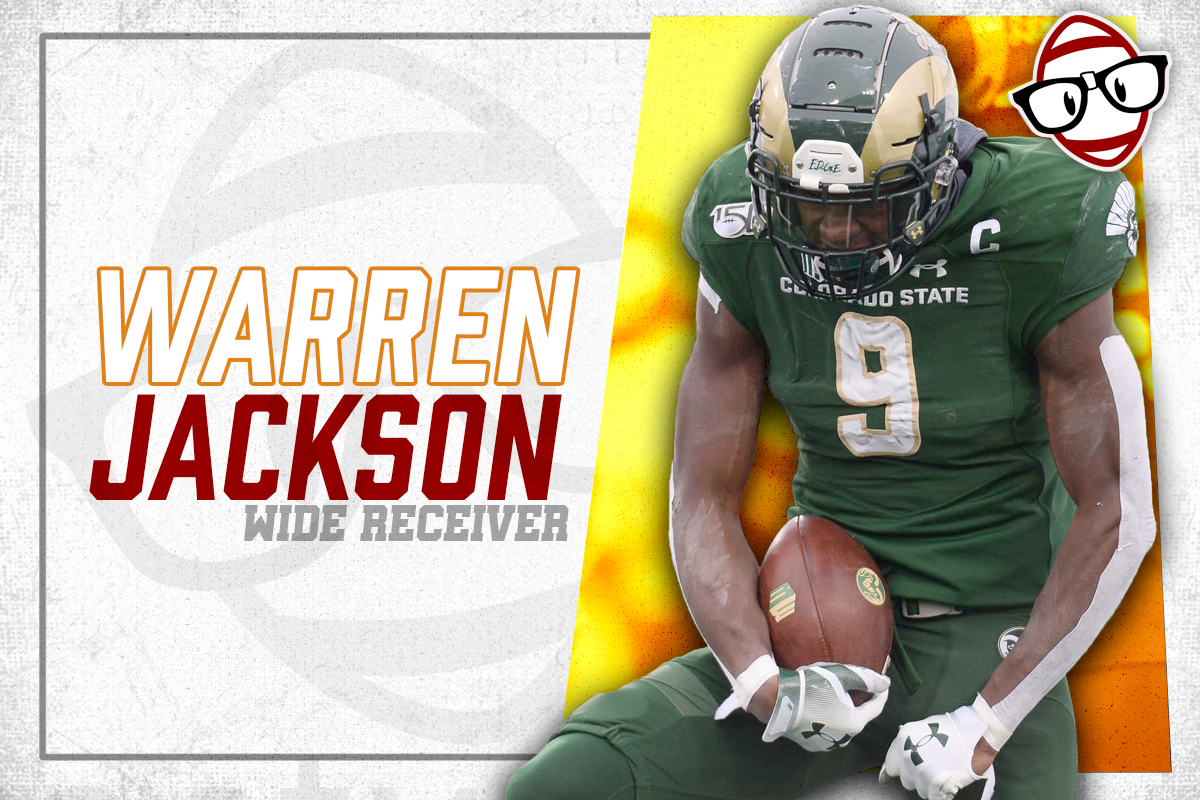 Slated to attend the University of Arizona, the three star recruit out of California decommitted from the Wildcats before committing to Colorado State University. Warren Jackson would spend his freshman and sophomore seasons playing sparingly behind Michael Gallup, Preston Williams, and Bisi Johnson.

Jacksons breakout age of 20.2 is less than ideal but playing behind the trio listed above provided him with few opportunities. Jackson would go on to breakout in his junior season, posting 77 receptions for 1,119 yards and eight touchdowns. For his performance, Jackson earned first team All Mountain West.

Jackson received a slew of awards and honors before opting out of the 2020 season due to COVID-19 and to begin his preparation for the NFL Draft.

While sporting an uninspiring breakout age, Jackson does check the college dominator and college target share boxes, registering 41.2% and 28.5%, respectively. When he finally got the chance to shine, Jackson dominated the teams target share and production.

Jackson’s size and length are his greatest strengths and how he will butter his bread at the next level. He displays good, strong hands with the ability to win contested catches.

What really stands out with Jackson however, is his catch radius. He knows how to use his height and length to make plays on the football. Randy Moss agrees.

Clearly, Jackson has the ability to be a factor in the red zone and on 50/50 balls in the NFL.

Jackson also uses his hands well, extending his long arms out and using his hands to catch the football. But what might surprise you about Jackson is that although he is not an elite athlete, he does have solid instincts to make a play after the catch.

While Jackson is a vertical threat who thrives on the boundary, he also displays great toughness working over the middle and catching passes in traffic. This is where the excellent length and hands come into play, but the toughness across the middle is also important.

While Jackson possesses tremendous size and length, his top end speed remains a question mark. Jackson’s best case is probably a 4.5 40-yard dash, but if his time is north of 4.6 it could become a problem for his draft stock.

Again, Jackson is more elusive in short areas than most realize, but he will likely struggle to create separation at the next level. In addition to his speed, getting off the line and beating press coverage is also a concern. With a big, long frame that moves a bit slower, NFL cornerbacks will be able to jam him up at the line.

Jackson will be limited to playing on the outside, lacking the ability to move around the formation much. Colorado State used him in motion a fair amount to prevent defensive backs from jamming him up at the line. Jackson projects as an outside receiver only in the NFL, and won’t have the luxury of moving around a whole lot pre-snap.

Warren Jackson is an intriguing late round prospect for an NFL team in search of an outside receiver, or simply looking for depth at the position. Chances are slim that Jackson will be an immediate impact player at the NFL level. In the right situation and with the right development, he could eventually become one.

His game reminds me of the Denver Broncos’ Tim Patrick or perhaps Collin Johnson of the Jaguars. Each of these receivers use their length very well to win at the catch point, have good instincts after the catch, but lack the top end speed to be a consistent producer.

Patrick is an extremely valuable depth player. He stepped into the lead role for the Broncos when Courtland Sutton suffered a season ending injury. Collin Johnson appears to be playing a similar role with the Jaguars. Given the right opportunity, Patrick and Johnson are good enough to be consistent producers for an NFL offense with immense upside in the red zone.

That is how I see Jackson in the NFL. He will initially make his mark as a backup, outside receiver but make some splash plays when given the opportunity. Time will tell if his development will lead to a prominent NFL role.