Gage Bridgford (@GbridgfordNFL) looks at one of the interesting wide receivers in this year’s draft in Indiana’s Whop Philyor. 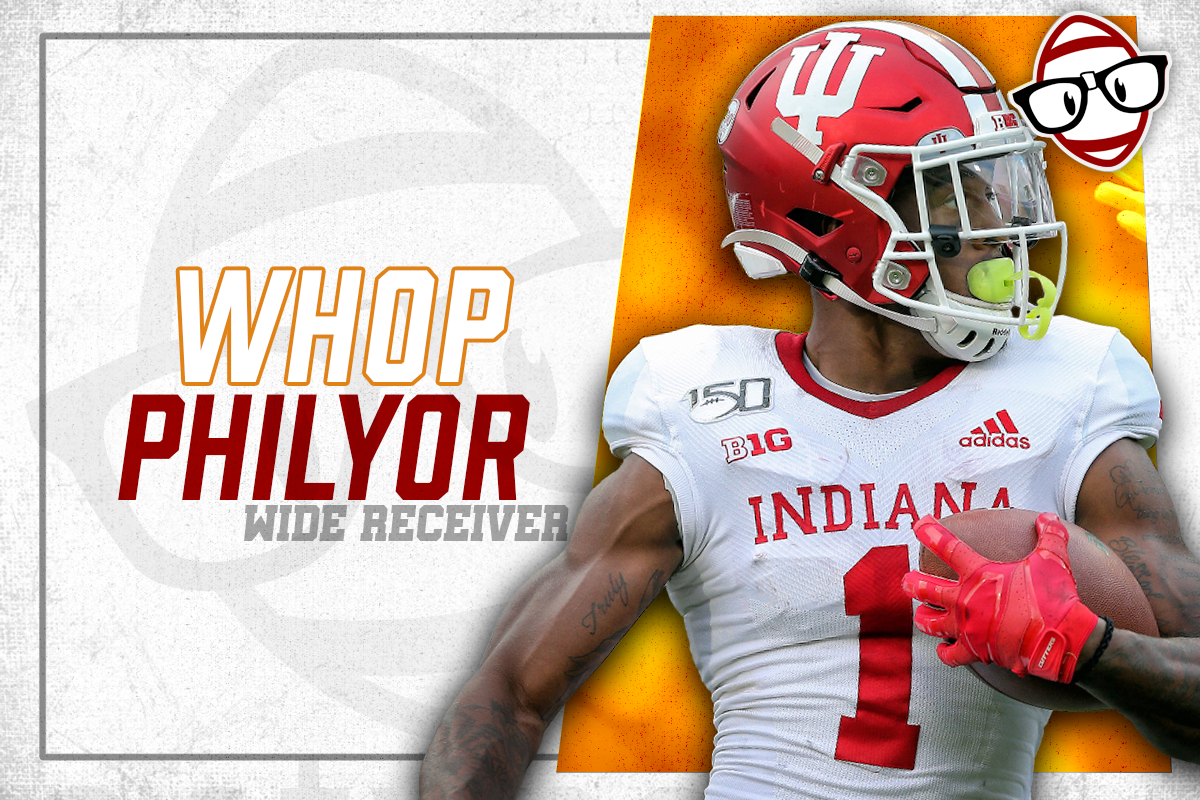 Mister Elias De’Angelo “Whop” Philyor was just a two-star recruit from H.B. Plant high school in Tampa, Florida. Outside of Indiana, some of the schools looking at him included Cincinnati, Louisville, and Virginia Tech. However, it took just one visit on January 13th, 2017, before he committed to join the Hoosiers five days later. After being somewhat of an afterthought through his first two seasons, Philyor took the hunger for Whoppers that had earned him a nickname as a child and put it to work on the football field.

He emerged in 2019, putting up a 1,000-yard season and establishing himself in the Hoosier offense. Philyor was working on silencing the doubters that left him outside the top 300 of the 2017 recruiting class. Some of the notable names from that recruiting class were Jerry Jeudy, CeeDee Lamb, and Tee Higgins. All three wideouts were selected within the first 33 picks of the 2020 NFL draft. Philyor could have entered the draft off of that junior tape, but he elected to come back to show that he had more to give.

Alongside teammate Ty Fryfogle, Philyor was a key piece to an Indiana team ranked in the top 10 for five weeks in the AP poll, the first time they had been ranked in the top 10 since the 1969 season. Philyor wasn’t the big-play threat for this offense, but he was the bail-out option for his quarterbacks. He showed that he could be the type of player you manufacture touches for at the next level, and every team is looking for a guy like that.

Philyor wasn’t on the yardage pace in 2020 that he was in 2019, but he was on pace to pass his receptions total with a 12-game pace of 81 catches. While Fryfogle is the big-play receiver, Philyor focused more on underneath routes. He averaged 10.2 yards in his freshman and sophomore seasons. His junior season saw a significant bump up to 14.3 yards per catch. Some will likely look at his junior season as an outlier, but that doesn’t tell the full story.

The Hoosier defense frequently generated short fields by creating 1.2 more turnovers per game in 2020 than they did in 2019. Philyor and the offense weren’t forced to make as many long trips down the field. Instead, Philyor was tasked with snagging underneath passes and turning them into key gains to get them down the field. When you turn on the tape, which we will shortly, you’ll see multiple instances of Philyor turning nothing into something.

At 5’11,” Philyor isn’t going to be the guy that generates touchdowns on jump balls in the red zone. He’s going to be knocked for in the pre-draft process with just 12 total touchdowns in his four-year career. That’s not to say he can’t find ways to score, but while some guys such as Tylan Wallace of Oklahoma State excel in jump-ball situations, Philyor is not one of those players.

Philyor isn’t a huge jump-ball guy, and he’s not going to win with size down in the red zone. However, he does know how to use his athleticism and smooth movement to get separation to make a play. He sells the out towards the boundary, which forces the corner to commit. Once that happens, he breaks towards the end zone for the score, and the catch is reminiscent of Willie Mays in center field. When you don’t win with size, you have to have this skill in your arsenal.

Whop isn’t a huge downfield guy, but he can generate yardage after the catch when given the opportunity. He catches this ball that should be a gain of about eight or nine yards. Instead, he breaks a tackle and utilizes his downfield blockers to triple it into a 26-yard gain. Philyor demonstrates the ability to fit into a scheme that allows him to make plays with the ball in his hands.

This is going to be Philyor’s main selling point to NFL teams running modern-style offenses. He’s comfortable as the target on wide receiver screens. He definitely knows what to do once he has the ball in his hands. On this play, he’s got a fair way to go before the first down. Once he catches the ball, he waits for his blocks to get set up, and he bursts ahead for those tough yards at the end of the play.

Philyor is likely going to get drafted on Day 3, and it will be interesting to see where he ends up. He’ll struggle more if a team elects to line him up in a traditional X role outside as he excels more in a typical Y role out of the slot. A team such as the Green Bay Packers hasn’t had a traditional slot player since Randall Cobb’s departure. They could use him in their offense despite the fact he doesn’t fit their typical size molds. He will likely be drafted somewhere in rounds four through six when teams go to work to try and fill out the depth of their receiver room. For fantasy, you’ll likely be looking at grabbing him as a UDFA at the end of your rookie drafts.