The @DynastyNerds staff is back with Superflex Mock Draft 5.0. Who is the steal of Round 1? 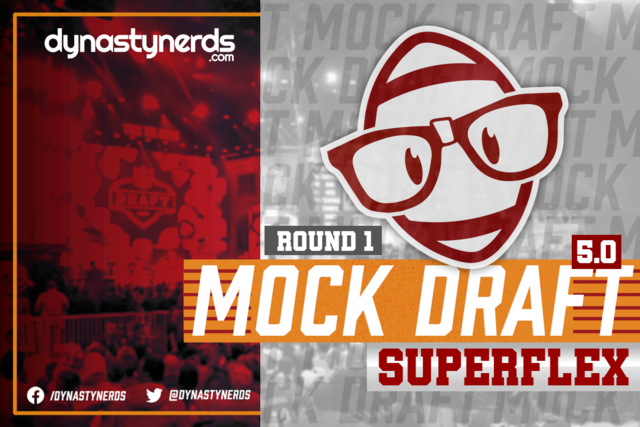 We keep moving along as we enter into March, and the Dynasty Nerds team has another mock draft to feast your eyes on.

It feels like the “he won a national championship at 18” bit has been on loop for years now, so I understand how it’s easy to start poking holes in Lawrence’s profile. No other player I can think of has spent so much time at the presumed 1.01 spot of their class. But now is the time to stay steady rather than try to get cute. I feel like he is still the consensus #1 pick in the eyes of NFL staff, and he should be for us too. JAX is not the worst spot we’ve seen a top pick go to either, as they do have a couple of weapons.

Don’t overthink this pick. Fields is the only player who could challenge Lawrence for the 1.01 in SF drafts making him the easy selection at 1.02. Fields may have had some rough games this year, but we’ve seen his potential the last two seasons. If his game this year against Clemson proved anything, it is his toughness and ability to put points on the board, which is exactly what you want in fantasy football.

Quarterback is the name of the game in Superflex. When drafting this highly in a rookie draft, you ALWAYS take the QB. Now I know that RB is the sexy pick, and sometimes you need a WR, but a starting NFL QB is the thinnest position across the spectrum. Zach Wilson has skyrocketed up draft boards following a nice career at BYU. There seems little chance he makes it out of the top 10 NFL picks. Many in the draft community have moved him ahead of Justin Fields. Do yourself a favor, and don’t miss out on this kid. He has the moxie and the skills to succeed at the next level.

At 1.04, I will be taking the most complete back in the class. Najee Harris has a rare combination of patient, controlled running, and power. Harris will be the featured back for whichever team selects him in the NFL draft from the day he steps foot onto the field. He has underrated catching ability and is nearly a lock to be an RB1 for a stint in this league. RB1’s are worth high first-round picks in all formats.

Depending on your league, I think it is pretty safe to assume that either Najee or Chase will be available at the 1.05 (pending landing spot of top QBs), which is exactly where I want to be if my QBs are covered. I can’t think of a better pair of “sure-things” to make a splash in the NFL. Chase is a route-god with a near-perfect release off the line. There is no obvious flaw in his game that could scare any NFL team away from him in the draft. He can take a slant to the house or moss a defender in the endzone. There is no limit to the ways Chase can win. Easy pick.

Unless my dynasty squad needs a quarterback, Travis Etienne or Najee Harris are my targets at 1.01, so I am thrilled to have landed him at 1.06. Etienne could have very well been the Chiefs target in the first round had he declared for the 2020 NFL Draft and may now force NFL teams to call the names of two running backs in the first round thanks to the standout season by Najee Harris. With Harris and Lawrence off the board, this was an easy pick. Landing on the wrong team could cap his upside, but Etienne projects as an immediate RB1 on almost any squad.

I expected to have my run at one of the running backs (Harris/Etienne) or a stud receiver (Chase/Waddle), and I got just that. Waddle falling to 1.07 would be ideal for anyone at this spot because he is the second-best WR in this class. Waddle is super-talented and has an extensive route-tree that will be an asset every week on my team.

If I’m a team in need of a QB here, I’d rather have Jones than Trey Lance. While I love Lance’s upside, Jones has a safe floor and is co-signed by DeVonta Smith, who reportedly told scouts that he prefers Jones to Tua Tagovailoa, last year’s fifth overall pick.

The disrespect for my guy Lance ends here!

With every top quarterback off the board, the choice here was obvious to me — pick up the third of my three top running backs in this class. Do I need to take a wide receiver here? No, because at 2.10, there will still be plenty available. What about Pitts? Yes, but it’s likely either Frieremuth or Jordan will be available later if I go that route. No, the pick here is to go running back. I love Javonte‘s game, and I think he’s a bargain here at the tenth pick.

Kyle Pitts is a ridiculous, special player. He brings a smoothness and speed that guys just don’t have at 245 lbs. Turn on any 2020 Florida game, and you’ll know why we all love him. I’m probably not taking him as a top 8 pick, but at 1.11, I’m stoked to see Pitts still on the board.

Getting Rashod Bateman here with the final pick in the first round is a great value. There may not be a more NFL-ready receiver than Bateman. Bateman is ready-made for the modern NFL game.

Check out our 1QB Mock Draft 5.0 being released soon!