The last rookie mock draft before the NFL Draft takes place and the Dynasty Nerds team is breaking it down Superflex style. 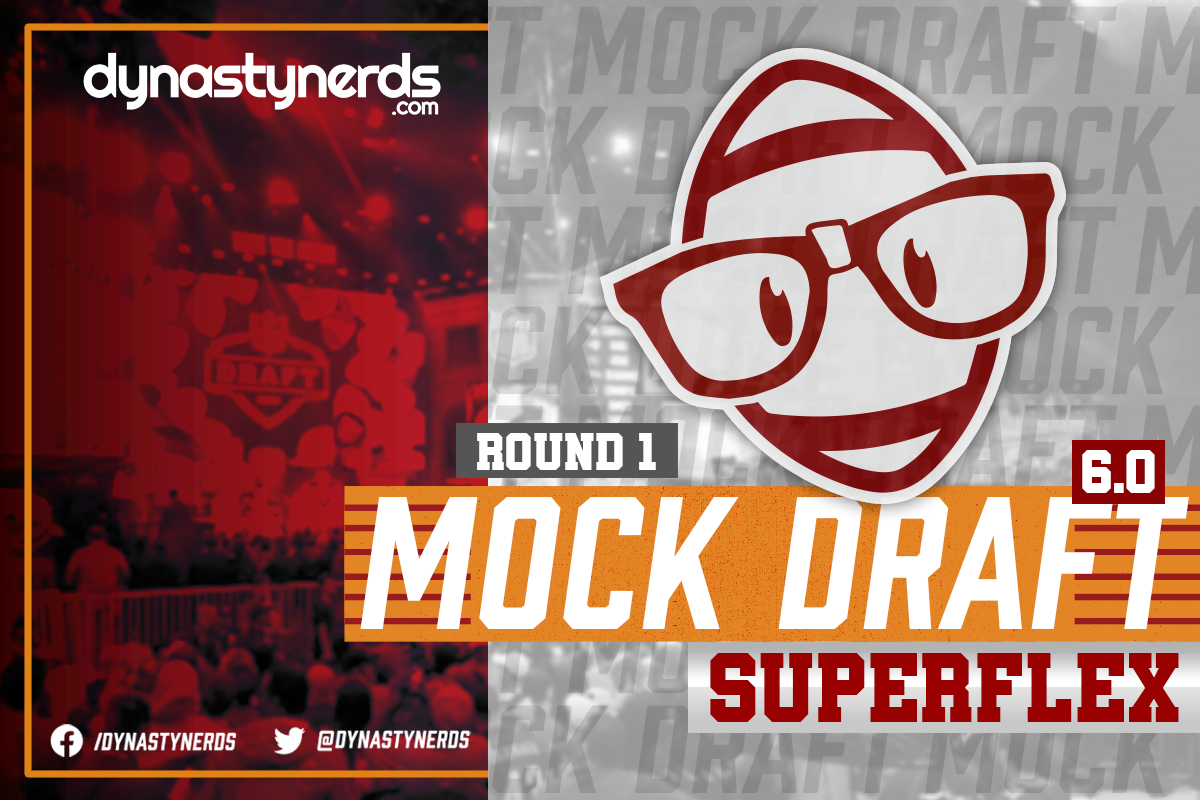 The 1st Round of our April Super Flex mock draft is here! The last mock before the 2021 NFL Draft is upon us. Find out what our Dynasty Nerds staff has up their sleeves today.

Trevor Lawrence is my pick at 1.01 if I am in need of stability at the quarterback position. Najee Harris and Travis Etienne would be the pick otherwise, but assuming I went running back heavy in the start up, I probably need a future QB1 on my roster. Things may not be pretty in Jacksonville, but before knowing where Justin Fields and Trey Lance are landing, gambling on them here could derail my efforts to build a true dynasty. Lawrence, despite the unappealing landing spot is about as can’t miss as it gets. Don’t overthink this one unless you have two top-10 QB’s on your roster.

Wilson’s arm talent would make him a strong candidate to go No. 1 overall in any other class. With teams like the Jets and Panthers heavily linked to the BYU gunslinger, Wilson is an excellent investment in a blind mock draft like this one.

In Super-Flex leagues QB’s are king. To that end 2021 offers up to 5 potential 1st round QBs. With Lawrence and Wilson off the board, the two safest options, I decided to aim for the moon and selected North Dakota St. Trey Lance. He has immense upside combining an overall skill set with a cannon for an arm and running chops to boot. You may have to wait a little while for him to develop in the NFL after playing so little last year. However, in this case the juice is well worth the squeeze.

I was honestly a little surprised to see Fields sitting for me at 1.04, so this was quite an easy pick. Great decision-making, smart scrambler, good arm strength, all of the physical measurables you could want from a quarterback. No, drafting a QB from Ohio State doesn’t scare me. Fields is a very talented player. Draft the talent.

The pick here was between Najee and Chase and given that I think there’s much more depth at the WR position I went with Najee. Some will knock his age or decision to stay in school another year but I think it helped his draft stock as he showed a lot more receiving ability on tape this season. I think Najee is to this year’s draft what Jonathan Taylor was to last year’s, and I think if he lands in a spot that will use him as a three-down back he has a chance to be a top 10 guy in his rookie season.

With the top four quarterbacks off the board, I’ll go with my RB2 in this class, Travis Etienne. An athletic specimen and dual-scoring threat, he is exactly the type of running back I’d want on my dynasty roster. Am I passing up a lot of great wide receivers here? Yes, but wait until you see the quality of what is still available at that position when I’m up again at 2.06. Go running back early and get Harris, Etienne, or Williams, because in this class, when they’re gone, they’re gone.

Chase is my 1.05 in rookie SF rankings and an easy selection for me at 1.07. The one big lesson I’ve learned is stick to your board and take best player available. He can step in day one and be an alpha WR for a team and for your fantasy team.

The first four picks of the draft all being quarterbacks shows the value of the position in superflex leagues. Despite being my QB5 of the class, Mac Jones is no slouch and he has a chance to be a top 10 pick in the NFL draft. Jones is a perfect field general that possesses great poise under pressure and beautiful ball placement. He may not have the arm talent of those who went ahead of him, however, Jones is more than capable of being a starting NFL quarterback for many years which makes getting him at the 1.08 feel like a steal.

I have Javonte ranked nearly identially to Najee Harris. Getting him at 1.09 is always the highlight of my day. He’s a big, fast, tackling machine with pass-catching ability. He’ll never be this cheap again- do what you have to to acquire him.

I was surprised to see the most decorated college receiver of all time available at 10 so I will glady take him here. Smith is a crisp route runner with great hands and the ability to produce YAC. The main question with him is obviously his small frame which may allow for him to get bumped off his route at the next level. Even with that one question mark, the rest of his game is elite.

Getting Rashod Bateman here with the final pick in the first round is a great value. There may not be a more NFL-ready receiver than Bateman. Bateman is ready-made for the modern NFL game.

Waddle has the ability to take over a game. He has great release off the line of scrimmage and can strike defenders well as a run blocker too. His acceleration is great and his route running is top 5. He is one of the most well rounded receivers in this class. His adjustment to the ball and explosiveness is why I truly love him here. He will be a NFL starter instantly and a FLEX option for fantasy at worst, in my opinion.

Check out our 1QB Mock Draft 5.0 Round 2 being released soon!

Keep an eye out for Round 2 coming your way soon!

🆕 Week 2 of the NFL season is almost here! In the second installment of his weekly QB Start/Sit column,
@Spydes78 recaps Week 1 and tells you which signal callers will stay hot. The play clock is ticking down, so check it out!
https://www.dynastynerds.com/changing-the-call-quarterback-start-sits-week-2/