The Nerds have completed their final SF mock before the NFL draft. Here’s round 2, and man, is it loaded! 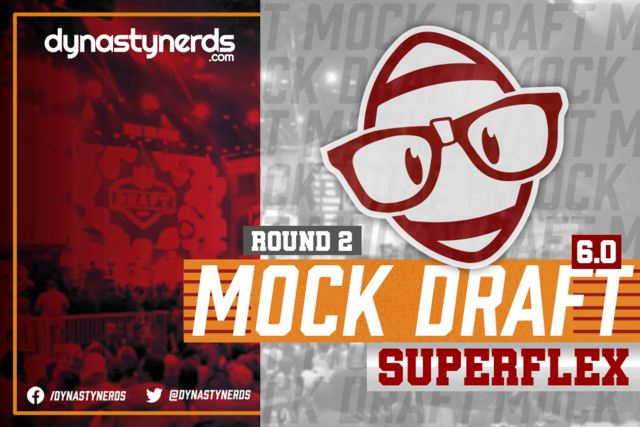 The second round of our Superflex Rookie Mock Draft is here! We recommended picking up those second round picks all year, and here is why! You can find round one here.

The 2.01 is an extension of the first round this year. Kyle Pitts is one of the most physically gifted tight end prospects we have seen in a while. This feels like cheating, Kyle Pitts is a smash selection for me here at the 2.01 in Superflex.

Moore’s athletic skillset is on par with that of Tyreek Hill, as both players mix powerful, stout frames with dynamic speed and agility. Regardless of landing spot, Moore has the talent to become a one-of-one type of receiver at the NFL level.

An elite-level slot prospect. Elijah Moore is one of my favorite route runners in the draft. He has recently received substantial praise from Odell Beckham Jr. who said that the youngster has NFL-level routes and breaks to his game. There are certainly some RBs that I am interested in with this pick but not knowing landing spots at this point I view Moore as a nice safe option that will provide quality fantasy points for your team for years to come.

I’m not going to lie, I was fairly confident I was going to be able to draft Elijah Moore here. But after being sniped, I had to just go with the next wr down on my rankings. I knew Wallace was good before I started watching his film, but he really impressed me more and more. He’s a body-control maestro with the most arrogant hands in this class. Even though I had to pivot, I was extremely happy to still have Wallace here.

200 was the magic number with Gainwell. Everyone was waiting with bated breath to see if he weighed in over 200 at his pro day and he barely eclipsed the mark at 201 pounds. His weight, coupled with the fact that his 4.42 40 time at his pro day is in the 86th percentile at RB, moved him up my board to make him my RB4 over Jermar Jefferson. Given Antonio Gibson’s success last season I’d love to grab another Memphis RB who is projected to be even better in this range and hope he lands somewhere that will use him as something other than just a third-down back.

In my write-up for my pick in the first round of this pick, I mentioned that I went running back there, as I knew wide receiver would still be plentiful at this pick. Boy, was I right, although I never expected a player of Marshall’s caliber to drop this far. What a great draft in which to have second-round picks! Marshall is a phenomenal talent, and I’m elated to land him in the middle of the second round.

Sometimes you just take what the board gives you, in this case it is a wide receiver with burst, crisp routes and an ability to win at all levels. Amon-Ra is extremely versatile and isn’t being talked about enough due to a shortened PAC-12 schedule. He should get solid draft capital which could take him out of this range in your drafts.

Averaging 20 yards per reception, Dyami Brown will be a vertical weapon for whichever team decide to draft him. This, along with his alpha build and dynamic athleticism gives him the upside to develope into a teams WR1. With a safe floor of a vertical threat for a team and upside of being a dominant alpha, Dyami Brown in the late second is a no brainer.

Jefferson is one of the more divisive guys in this class- he’s anywhere from the RB4 to a late day three pick depending on who you ask. I like his film, particularly his vision and open-field ability, and his analytical profile is better than any other back after the big-3. His pro day results, unfortunately, will knock him down quite a bit in the NFL draft, and narrow his successful comps to some very slim pickings.

Carter is a smooth, slippery runner who consistently displays great vision inside and outside of the tackles. A bit undersized, he profiles best as a secondary back in a timeshare with elite pass catching chops. In the modern NFL, this type of player is utilized in nearly every offense, and with Carter’s well-rounded game, it’s not out the question that he gets an opportunity to be a feature back if things break right.

Freiermuth is a complete TE who will see the field early and never leave. He’s a good blocker and a talented receiver, a red zone monster who should be able to produce right away.

With RAC and speed all day long, Amari Rodgers is a well-built 5’9″ receiver. His strong running style helps him break contact from defensive backs in the open field; his top-tier balance makes him a force to be reckoned with.

Our third and final round of our Superflex Mock Draft coming your way soon!