It’s the last pre-draft Nerds mock, and the third round is loaded! 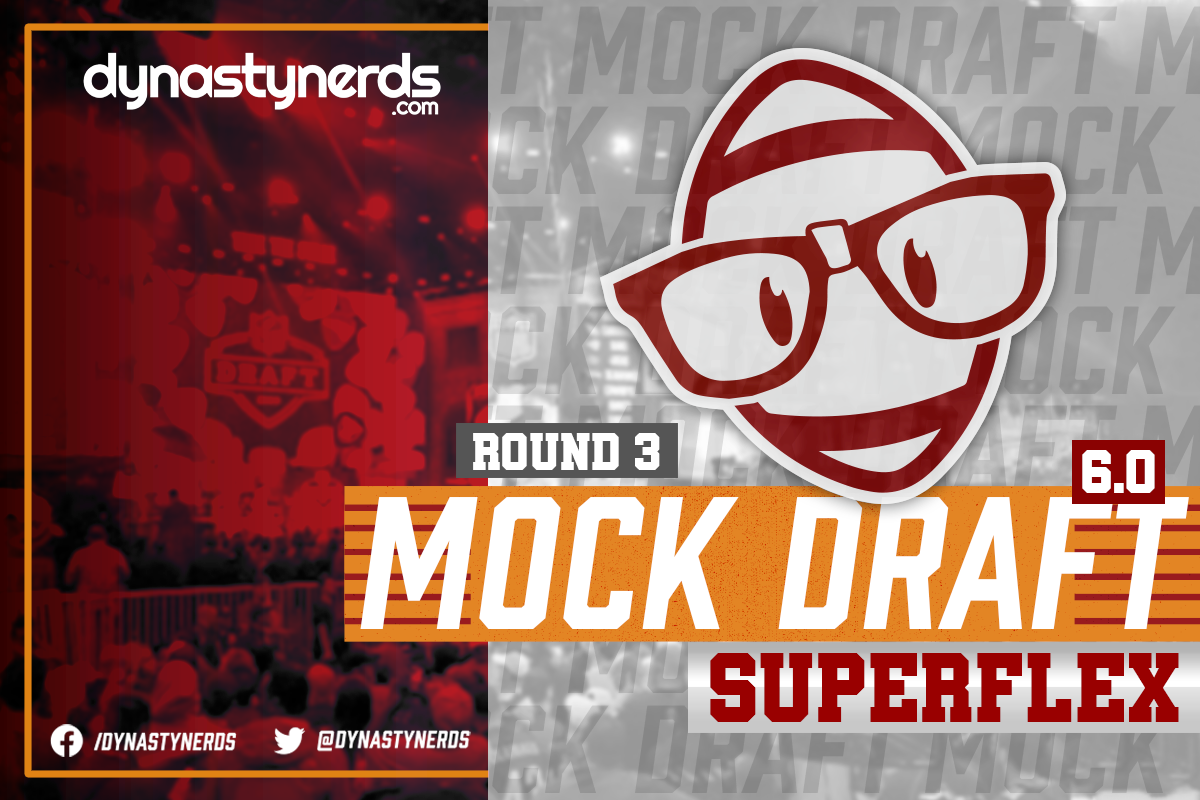 I’m willing to forgive Chuba Hubbard for some of that tape in 2020 and chalk it up to a strange year. No other running back in this class can claim a stake to a 2,000 yard rushing season in a Power 5 conference. Chuba is one of the best home-run threats in the 2021 class. Getting him at the 3.01 feels like good value.

Brevin Jordan is an athletic freak at the tight end position. He’s a monster after the catch as well. Jordan has things to polish in his game, but I love the potential upside. We are blessed to have an excellent top three at the position this year. You’ll be plenty happy walking away with a guy like Jordan at the 3.02 in any Superflex drafts.

Kylin Hill has been one of my favorite deep-running back prospects for some time now. Before the arrival of Mike Leach, the former Bulldog was one of the top backs in the SEC, racking up 242 attempts equating to 1,350 rushing yards with 10 TDs. If drafted to an advantageous situation, he can be highly productive. At this point in the draft, I am happy to select a high upside player who is well-rested following his opt-out in the 2020 campaign.

Down this far in the draft, my list of favorite players was very slim. I decided to go with one of the guys my good friend and fellow Nerd, @devycramps, has been pounding the table for as long as I’ve known him—Trey Sermon. He has a great skill set but lacked the production you want to see out of your college backs. However, Sermon did everything he could to make up for that against Northwestern in 2020. He rushed for 331 yards and 2 TDs in that game. There are a few red flags analytically, but he’s still a good prospect. I’m happy to take a chance on him in the third round.

During the college season, Kyle Trask and the Florida offense seemed to be the talk of the town. Now that we’ve reached the draft cycle, there seems to be radio silence when it comes to Trask. Sure, he isn’t the prospect that fellow quarterbacks Trevor Lawrence or Justin Fields are, but I still think he can be a solid professional quarterback in an offense tailored to his strengths.

If he lands somewhere like New Orleans, New England, or Washington, he could benefit from sitting for a year. Then take over a solid offense when he’s ready, and have low-end QB1 production. I’d be happy to take that gamble at this point in the draft.

Here we go again! I’m the KadariusToney guy on staff, apparently. This is the third month in a row where I’ve drafted him. Toney has quickly become this year’s victim of draft Twitter narrative, with people hating on his game left and right. Would anyone mind if I plagiarized myself from our mock draft last month? (The previous TWO months!)

Before making this pick, I had to go back through our team’s earlier picks to make sure I hadn’t missed Toney selection. Now, here we are. Fortunately for me, their loss is my gain.

Toney’s an extraordinary athlete and a human highlight reel. Some have labeled him as a gadget player, but with the creative offensive minds in today’s NFL, yesterday’s gadget players become tomorrow’s consistent fantasy producers. He is ideally suited as a slot receiver at the professional level, showcasing short-range burst and explosiveness that will make teams drool over the potential mismatches of being lined up in the slot again linebacker coverage. I would draft Toney before several of the names that appeared earlier. If he gets second or even first-round draft capital in this spring’s NFL draft, I promise that there’s not a chance you’ll be getting him in the middle of the third round of your rookie drafts.

Grabbing my RB4 of the class in the late third round is robbery. Javian Hawkins is undersized but has proven he can handle a workload time and time again at Louisville. There is a reason that they call him Playstation, as his lateral quickness is unmatched in this class.

Grabbing my RB4 of the class in the late third round is robbery. Javian Hawkins is undersized but has proven he can handle a workload time and time again at Louisville. There is a reason that they call him Playstation, as his lateral quickness is unmatched in this class.

Rhamondre Stevenson, I just can’t quit you. He may be left for dead by many after his 4.63 40 time, but I’m not sure what people were expecting- that’s what his play speed looked like. It’s fast enough for a guy that profiles as a between-the-tackles banger with pass-catching upside. The only problem for Stevenson maybe draft capital, but even if he falls, I’ll still take some late shots.

Speed, speed, and more speed, that’s the name of the game for D’Wayne Eskridge. He predicted himself that he would run a 4.2 40-yard dash on his pro day. At 5’9″ 190 pounds, Eskridge needs space to operate, but he can certainly create it with his speed. Eskridge fits the mold of a speedy small school prospect who can be a playmaker in the NFL.

Tamorrion Terry has been hyped by many to be the size/speed sleeper from this draft. A sub-par pro day performance and off-field issues have left some skeptical of his future at the next level.

I chose Jamie Newman here because of his size and upside. His talents are still undeveloped, but his upside is tremendous. Newman can throw with the best of them and has excellent timing in the pocket. His internal clock is fantastic as well. Newman’s knocks are he stares down his key read too long and struggles with challenging on-field decisions and ball placement on outside throws. With the right team and coaching, he can be a solid NFL quarterback.

That is a wrap–for now! We will be back once all the dust has settled on the 2021 NFL Draft!!!

Landing Spot Lottery: Will this be good for fantasy production?
2021 1-QB Mock Draft Version 6.0 Round 3