Our devy team goes through a two round rookie mock. Here is round 1 of the Superflex mock 3.0. 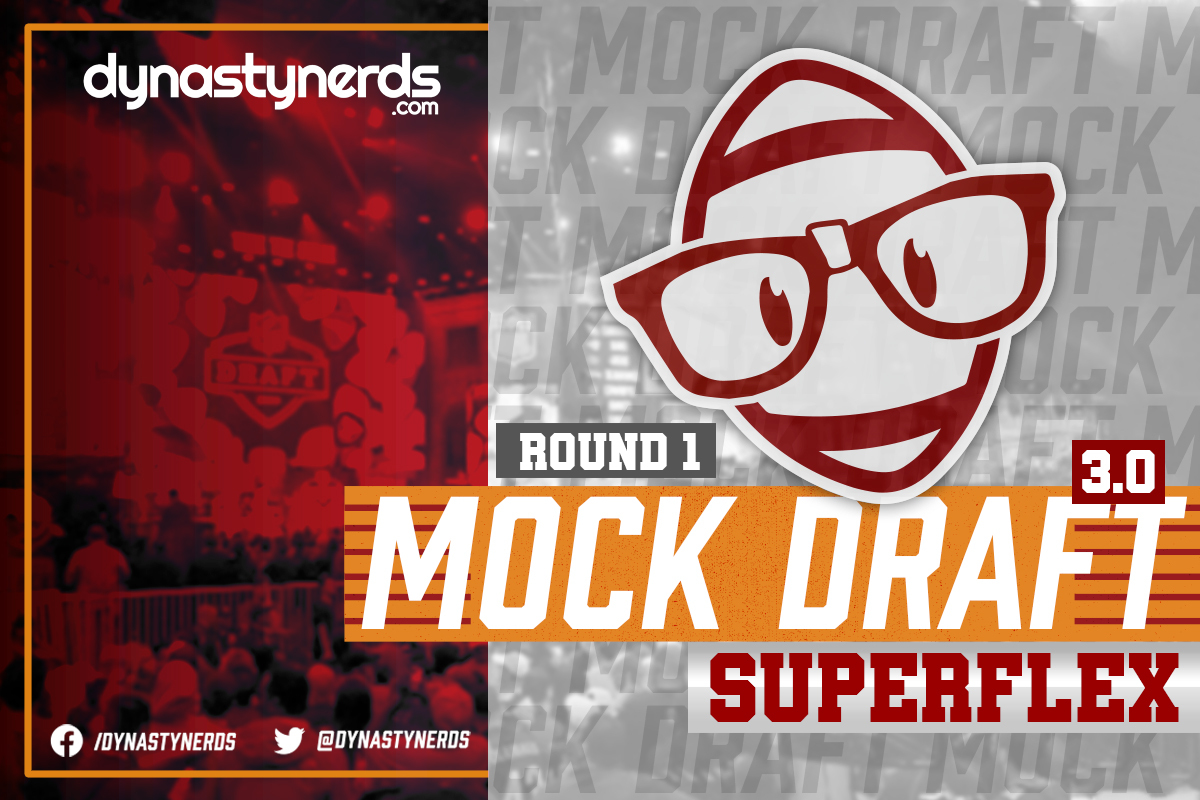 We have finished the college season with a bang. Alabama came out and beat up on Ohio State to lay claim to the National Championship. We are getting closer and closer to the off-season, so it’s time to get you ready for your rookie drafts. Our devy team decided to help give you an idea of just how deep this draft class is. Today we will do round one of a two-round SuperFlex rookie draft mock. Check out the bottom of the article to see how some player’s value may have changed since mock draft 2.0.

Oops, this wasn’t a mistake. Trevor Lawrence is a generational talent at the QB position, no doubt about that. However, we aren’t playing NFL football. We are playing fantasy football. Fields has a higher ceiling when it comes to fantasy football. He showed the QB he is against Clemson and silenced a lot of the haters. I love both of these QBs, and with the choice and similar floors, I went with the higher ceiling pick. Am I wrong?

Well, it doesn’t really get much easier than this. Trevor Lawrence is one of the best quarterback prospects to come out of college since Andrew Luck & Peyton Manning. He’s a generational prospect and has been since high school. He should be the focal point of his team at the next level and will immediately produce. Not much to be said here; you get an immediate QB1 in dynasty.

In a weak RB class, Harris is the clear-cut RB1 in this class to me. He is shifty between the tackles, shows balance and an ability to break tackles, and is a force in the receiving game. There is no dynasty asset that you can’t acquire for a top RB, and I feel that Harris can be that type of RB.

Travis Etienne made the surprising decision to go back to school for his senior season, citing the fact that he would not leave school early for a second-round grade. While he did little to improve his draft stock, he now has his degree and will face lighter competition to be the first running back to hear his name called in the 2021 NFL Draft. Clemson was not nearly as strong as they had been the prior two seasons, and Trevor Lawrence missing time with COVID also hurt Etienne’s numbers. Etienne did manage to corral a career-high 48 passes, so at the very least, he may now have NFL teams viewing him as someone with true workhorse potential. There are very few NFL depth charts Etienne wouldn’t rise to the top of, so landing him here feels like easy money.

I could take Chase here and be happy, but in SF, it’s always best to take the QBs while there are high-level prospects left. Lance is a bit polarizing; some are off him, while others (including guru-level draftniks) have him as the QB1. His tools are undeniable. He has Cam-like, shoulder-dropping rushing ability, the arm talent to make all the passes, and he sees the field and makes reads like a pro. I can’t wait to see where Lance lands this spring.

I have Javonte Williams ranked over Travis Etienne, which may seem controversial to some. Playing in committee backfield, he still leads college running backs in explosive plays (runs over 10+ yards) with 63. He is currently sitting with the most avoided tackles in college as well, with 63. Javonte is a good pass blocking back and very productive in the receiving game as well. Splitting time with Michael Carter has lowered both of their values. Still, I believe in Javonte’s ability to be a workhorse at the next level.

This is a Superflex draft, correct? Oh yeah, I thought so. Any time I can get a QB projected to go in the top ten picks of the NFL draft in the middle or late first round of an SF league, it’s like highway robbery. This is the exact position I snagged shares of Justin Herbert last year while others focused on short-term assets like RBs. Wilson has excellent size for the position to go along with a cannon for an arm. While he will never be confused for Lamar Jackson or Josh Allen, he does possess deceptive athleticism. I am beyond stoked to get a potential 15-year asset with the 7th pick in the draft.

The reigning Heisman Trophy Winner, Smith, may have overtaken Ja’Marr Chase as the WR1 in this class. He’s a plug and play starter with the upside to become a Marvin Harrison type player in the proper system.

Even with DeVonta Smith winning the Heisman, I still think Ja’Marr Chase is the #1 WR in this draft. However, Smith has closed the gap between the top two receivers in this draft. Chase is the most complete receiver of the bunch and can fit in any offense.

I would be thrilled to land Pitts at the 1.10, even in non-TE premium leagues. While most tight ends take 2-3 years to acclimate to the NFL game, Pitts is more of a tall wide receiver than a tight end and should be able to step in and contribute right away. He will be a matchup nightmare for defenses. I feel comfortable saying that he will be a top 6-7 TE in his rookie season with the sky as the limit after that.

Moore is a curious player, and I see a huge range he could in. The talent is almost 1.01, but the injury history is scary. He can do everything – fast, strong, versatile, and incredibly dangerous. I am not worried about his size, but many teams may be.

Waddle is a true playmaker regardless of where he lines up on offense. He has played snaps inside, outside, and even coming out of the backfield for Alabama. Waddle posted 106 receptions in his three seasons with Alabama for 1999 yards and 17 TDs. I personally like the early NFL player comparison of Santana Moss and believe Waddle can be that type of player for any NFL offense.

Player on the move

This completes the first round of Superflex Mock Draft 3.0. Round two will be released soon. We on the devy team will continue to do these every month leading up to our favorite time of the year, draft season. Continue to check back for all of our devy and NFL draft content as we push closer to the NFL draft.