Round 2 of Superflex mock draft 5.0 is dripping with value. Where did your guy go? 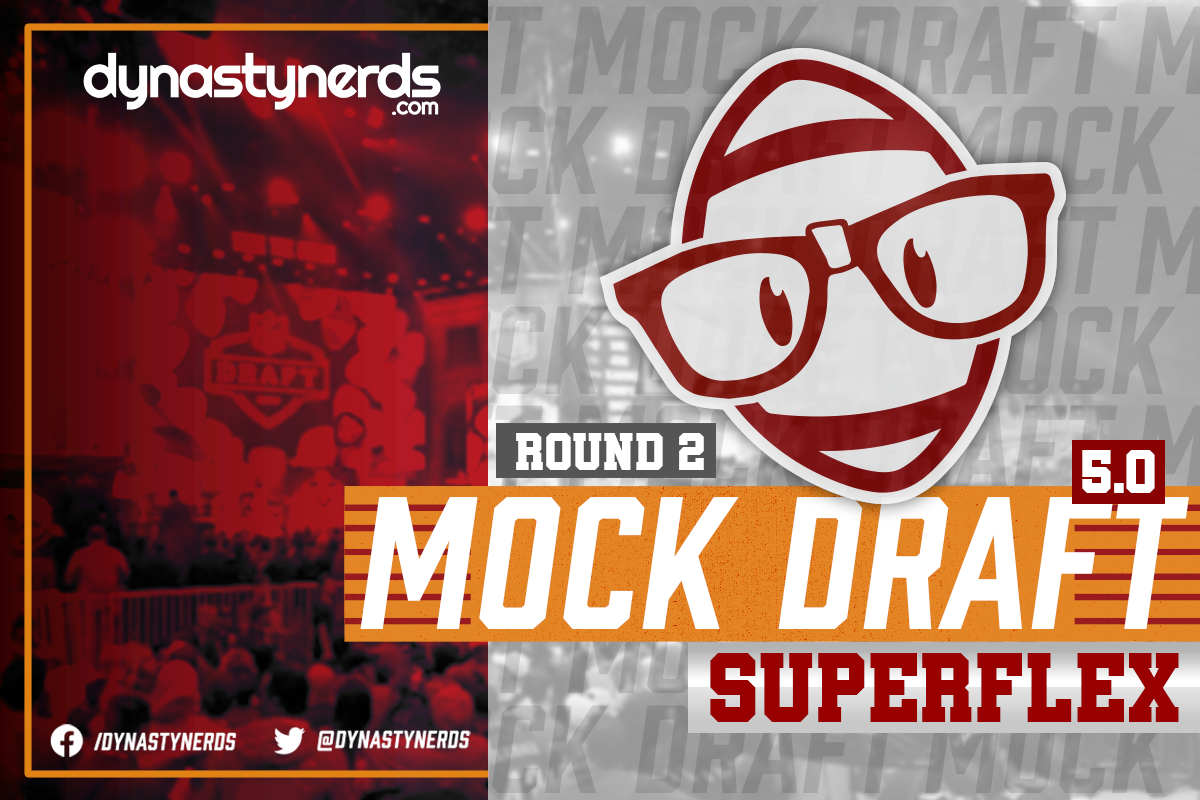 We keep moving along as we enter into the month of March, the Dynasty Nerds team has Round 2 of our Superflex mock draft to feast your eyes on. You can find Round 1 here.

With the run on QB in the first round, the value in the second round is just ridiculous!

Rondale Moore is a player that I like in the first round but LOVE if he makes it to the second. Between dominating the field as a freshman and his undeniable explosive athleticism, I have high hopes that Moore will be a top threat WR no matter where he lines up in the NFL. The only baked-in risk for me is the injury history, but the upside makes me forget all about that at this price.

DeVonta Smith at the 2.02…shut the front door. The Heisman Trophy winner showed his abilities this season regardless of BMI. I couldn’t pass up the chance to grab the top WR in all of college football this past year. Sure he played on Alabama but he can play the game of football and at 2.02 to be able to grab a guy who should be a first-round pick is an easy selection.

The 6’4 210 lb. Junior out of FSU might just be the most physically gifted player in the entire draft. He’s big he’s fast and he is looking for redemption after a final season in college football marred by injury and off-field issues. I’m swinging for the fences on this one and Terry has the highest ceiling for my money.

Amon-Ra St. Brown is a versatile receiver that can play in the slot or outside. He is one of the best route runners in the class and is a very gifted athlete with his brother in the league as well. St. Brown can win at all levels of the defense creating separation on short routes and tracking the ball downfield. I expect him to be a day two pick in the NFL draft and he is currently my WR6.

This is exactly who I am aiming for in the second round of every rookie draft I am in. I could talk about the 19.4 breakout age or the 45.5 college dominator rating or even the 35.2% college target share. But I won’t mention that. I’ll just mention his top-level burst, his reliable hands, and his immense versatility that was wisely taken advantage of by Lane Kiffin. Moore probably won’t fall very far for me if he lands in a less-than-ideal situation. But if he lands in the right spot, there is a good chance he jumps up into my top five WRs in this class.

Looking for a running back who can eventually join the 1k/1k club or hit 100 receptions for the season? Gainwell can get there if he lands a starting job. He is so good as a receiver that he may be pigeon-holed into a third-down back role, but he has enough juice as a runner to carve out a meaningful role on running downs, even if he is not the lead runner. He has featured back potential and upside but will need to avoid being drafted behind a top ten talent to reach his potential. At best, he can push for Matt Forte type of numbers. At worst, he’s James White with Giovani Bernard skills as a runner. The most likely scenario is Austin Ekeler’s type of usage alongside a power complement. Excited yet?

I believe this is where it got a little sticky, as I wasn’t sure what I wanted to do. The QBs after Round one are not good, and I did have my pick of the next tier tight end or even my WR3 Terrace Marshall, but I was aware that my running back selection would not be around in my next pick and had to select Michael Carter. Thunder and Lightning in College with Javonte Williams, and while Javonte has become the poster child, Carter is being overlooked in this draft. Carter was insane in his time in NC, and if you look deeper into the stats, he was more productive than Williams in several phases of the game.

Freiermuth has everything that it takes to become a truly elite NFL tight end. Considering Kyle Pitts went in the first round here, I see this pick as a great value.

I may have reached here a bit but I wasn’t sure that I would have the opportunity at 3.10. I like Stevenson’s game and I know there are worries about his playing weight and burst yet his weight for the Senior bowl was favorable. Rhamondre is my RB5 so now felt as good as any to take the shot.

In my write-up for my pick in the first round of this pick, I mentioned that I went running back there, as I knew wide receiver would still be plentiful at this pick. Boy, was I right, although I never expected a player of Marshall‘s caliber to drop this far. What a great draft to have second-round Superflex picks! Marshall is a phenomenal talent, and I’m elated to land him with the tenth pick in the second round.

Jermar Jefferson is my RB4. I think the consensus will catch up soon, so I don’t expect him here by April. He’s a slam dunk anywhere in the second round.

Brevin Jordan is getting overlooked given the hype surrounding Kyle Pitts. Grabbing a player like Jordan over a round later is an amazing value. You’ll have to be patient, but the upside is worth the wait.

Make sure to keep an eye out for Round 3 of our Super-Flex mock draft! Also, the 1-QB version is live and ready for you to feast your eyes on!