The third and final round of Superflex mock draft 5.0 is in the books. Where will you find a steal. 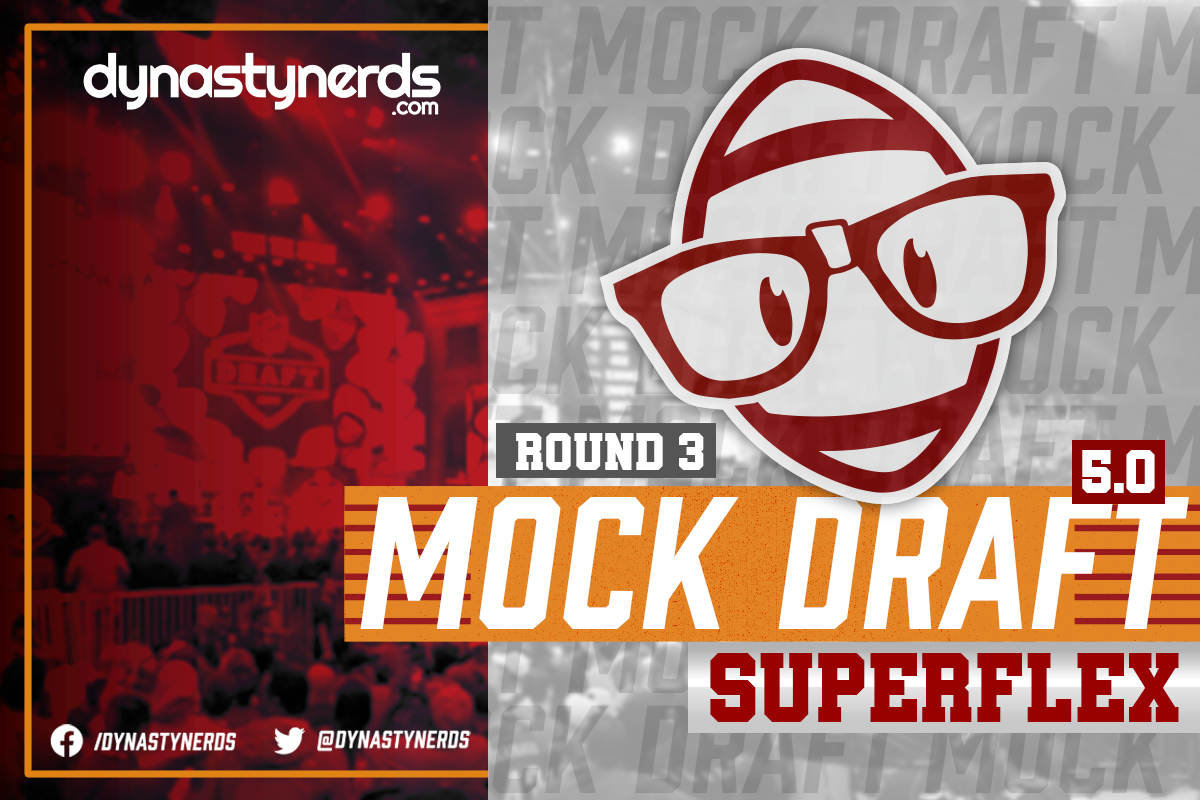 Rounds one and two are in the books. Today we bring you round three of the Superflex rookie mock draft. A 2020 first rounder slides to the third after going back to school and underperforming. Another third rounder may shoot up draft boards if he continues to rise up NFL draft boards.

Brown is a perfect example of the depth of this class driving down prime value. There is no way a player this talented should go this late, but here we are (not at the fault of Dyami either). All he’s done for three years is be a focal point of the Tar Heel offense, and while he doesn’t have the upside of some of the tier-one guys, I believe he will produce above anyone we’ve been able to acquire in round three of years past.

Lots of options in the third round, so I took a flyer on a player with the ability to score on any play. Tutu may be small in stature, but he plays big. He can get open, and once the ball is in his hands, it’s hard to catch him. The former high school quarterback has found the perfect role at receiver and is worth a shot in the later rounds of your draft.

Kylin Hill seems to be the forgotten man in the running back room. Much like Chuba Hubbard, if Hill had come out last season, his stock would have been much higher. In 2019 the kid from MSU led the SEC in rushing and spearheaded the Bulldogs rushing attack. The little bit of time he did play in 2020 before opting out highlighted how he was not a perfect fit for new HC Mike Leach and his Air Raid system. Hill is well built and physical enough to succeed in the NFL. With so many players opting out in 2020, players like Hill could fall through the cracks. Keep your eye on this kid moving forward into draft season.

Javian Hawkins is my RB4 overall. He’s undersized, however, throughout college, he has proven that he can take big hits and carry the workload. Hawkins will fit nicely into a zone running scheme and can be a 20 plus carry per game guy. With the lateral quickness and long speed Hawkins possesses, he could easily be the steal of the draft, grabbing him at 3.04.

One of the traits that stands out to me with Wallace is his on-the-field work ethic. He gives his all every play, is a willing and capable blocker and fights through contact–every single time. By no means is he a burner, but he highpoints the ball with the best of them has great body control, and combines his soft hands with an explosive leap to win virtually any contested-catch situation that he finds himself in.

Hubbard has quickly become a forgotten man following his forgettable 2020 season. He was scintillating in 2019, and while he is still a work in progress, 2,000 yard FBS rushers are few and far between. Hubbard has a tremendous base and has proven to be a football layer with track speed. With a year or two with an NFL running back coach, Hubbard can elevate from committee member to full-time starter.

At 3.07, according to PFF, Seth Williams led the Power 5 in contested targets, and most of that had to do with the quarterback play. Williams is a wild card in this draft, and due to the bad quarterback play, he has fallen down draft boards everywhere. At 6’3″, he has a big body, and while he does need a little polishing in several aspects of his game, I am willing to take a risk on a guy like Williams in the third round.

Trask is a steal here, as he should be the sixth quarterback off the board and still has a slight chance to be drafted in the latter part of the first round. While I don’t love his upside, grabbing a potential starting quarterback with a third-round rookie pick is nothing to sneeze at.

In my opinion, Jaret Patterson is overlooked. Three consecutive 1000 yard seasons and the latest one came in six games that included 300-yard and 400-yard games. If I can get a player with big-play ability near the end of the third, why not take the shot. The way Patterson finds holes and sees the field is at an NFL level. If he can land in a spot that has the opportunity, then he may be a player that is low-risk/high-reward.

3.10? Really? Kadarius Toney has quickly become this year’s victim of Draft Twitter Narrative, with people hating on him left and right.

As I said last month, “Before making this pick, I had to go back through our team’s earlier picks to make sure I hadn’t missed Toney being drafted, and somehow, I had just missed it. Fortunately for me, their loss is my gain. Toney is an extraordinary athlete and a human highlight reel. He has been labeled by some as a gadget player, but with the creative offensive minds in today’s NFL, yesterday’s gadget players become tomorrow’s consistent fantasy producers. He is perfectly suited as a slot receiver at the professional level, showcasing short-range burst and explosiveness that will make teams drool over the potential mismatches of being lined up in the slot again linebacker coverage. I would draft Toney before more than a few of the names appearing earlier on this list. He has improved by leaps and bounds during this breakout season, and if he gets second or even first-round draft capital in this spring’s NFL draft, I promise that there’s not a chance you’ll be getting him at 3.05 (* or now, 3.10!) in your rookie draft.”

I love Sermon at this point in the draft. The naysayers think he’s a JAG at the next level, which may be true; we’ll know more after his pro day. He certainly put some nice work on tape this year and had some solid early production as well. Check out his rookie profile for more about Sermon here.

Some are going to knock D’Wayne Eskridge, given his advanced age of 23 for a college football prospect. Eskridge has been moving up draft boards all around the NFL, and his dynamic profile makes him an appealing addition on the second day of the 2021 NFL Draft.

The Nerds team will continue to do these every month leading up to our favorite time of the year, draft season. Continue to check back for all of our devy and NFL draft content as we push closer to the NFL draft.