The 2022 NFL draft class is loaded with TE potential. @JoeBeldner shares why Greg Dulcich should be the top player at the position to target in your rookie drafts. 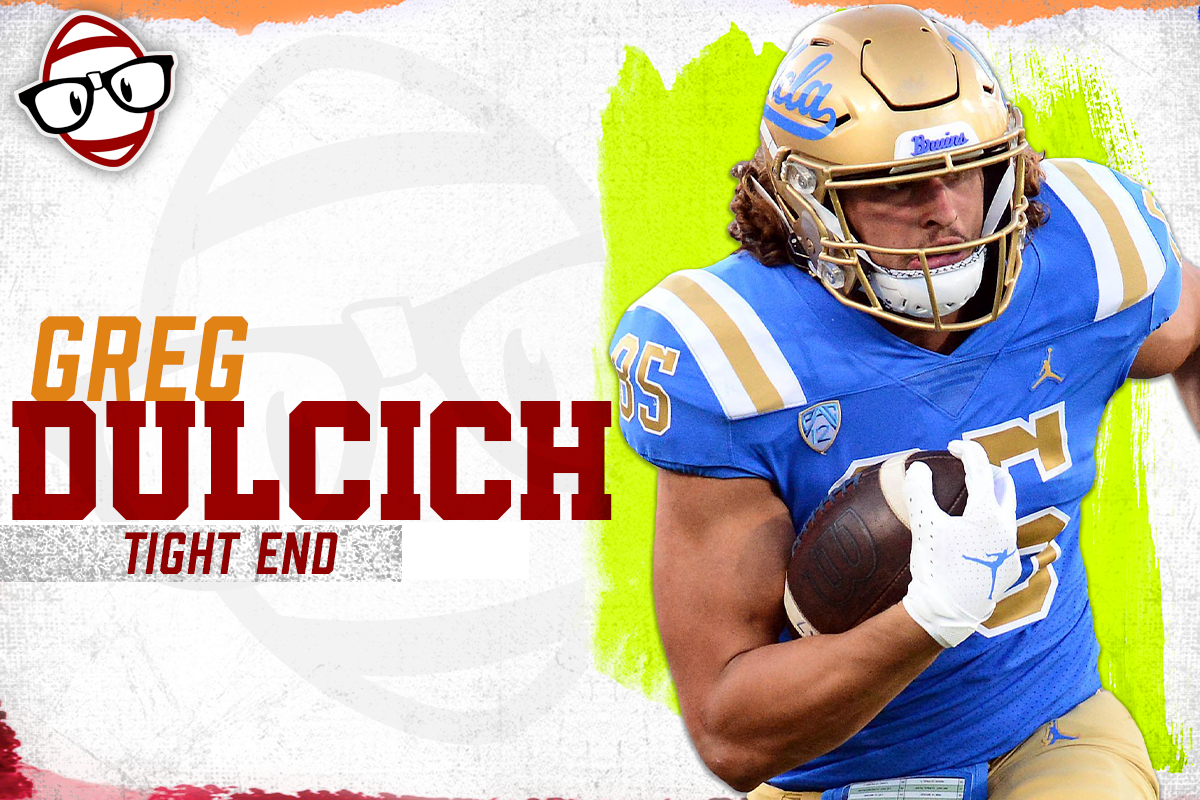 Before we dive into the spectacular rookie profile of Greg Dulcich, it is imperative to verify that he passes the “tight end vibe check.” First off, does he resemble a burly lumberjack? Indeed, he does. Next, does he possess a freakish level of athleticism for his size? Absolutely. Finally, does he rock some gnarly locks underneath his helmet that would make Samson jealous? You bet he does. Dulcich has been overlooked his entire football career, but it is finally his time to shine.

At 6’4″ and 250 pounds, Dulcich possesses the desired size that we seek in a TE prospect. This, unfortunately, was not always the case for the young pass-catcher. Coming out of St. Francis High School in La Cañada Flintridge, California, Dulcich was a lean, hybrid WR. In his final HS season, he hauled in 50 catches for 1,168 yards and 12 TDs. Even after an impressive season, he was only listed as a three-star recruit. With few major offers on the table, Dulcich began his transition to playing TE and had his eyes set on walking on to the team at UCLA.

Dulcich saw very little playing time in his first two years at UCLA as a walk-on. This was probably the best-case scenario for an undersized player who needed to learn how to play the position. He instead got the opportunity to play behind Devin Asiasi, who was later drafted in the third round of the 2020 NFL Draft by the New England Patriots. Dulcich took this opportunity to study underneath the future NFL talent while putting on 40 pounds of good weight and muscle. With the 2020 season lurking, he now possessed the size and knowledge required to fill the mammoth-sized cleats of being TE1.

Dulcich was a different beast entering the 2020 season. Now the starting TE, he erupted with 26 receptions for 517 yards and five TDs. The added weight, combined with his previous experience as a WR, helped make him one of the most dynamic tight ends in college football. This was especially present in his unique ability as a downfield threat. He followed up his breakout campaign with a spectacular final year at UCLA. Dulcich finished the season with 42 catches for 725 yards and five TDs. He averaged 17.6 yards per catch over his career at UCLA, which is extremely impressive for a TE.

Flaunting a versatile offensive skill set, Dulcich might have the highest fantasy potential out of all TE prospects in the class. There is most likely not a Kyle Pitts or Pat Freiermuth in the 2022 NFL Draft. After getting adjusted to the NFL, Dulcich has the potential to be a fantasy monster if drafted to the right landing spot. It might take a few years to adjust to the pros fully, but he possesses almost all of the offensive traits that we covet in a TE1. He has extremely long strides and looks athletic when running in the open field. He also possesses an admirable catch radius and is excellent at picking up yards after the catch.

If you begin to watch tape on Greg Dulcich, you will notice that there are about 100 plays that look just like this one. This highlight was ultimately chosen because it resulted in an incredible TD and celebration. First, Dulcich glides towards the end zone with his gazelle-like strides while keeping his head up and eyes alert for the ball. He then locates the ball perfectly in his breadbasket while securing the catch. The over-the-shoulder, contested catch has become his signature and will translate favorably at the next level.

Although he is a bit slimmer than other TE prospects, Dulcich is extremely physical once the ball is in his hands. To put it simply, he has a knack for the YAC. He flicks the first defender off of his back with ease on this play before seeking out contact at the next line of defenders. He will be a force to be reckoned with after the catch with a bit more added muscle.

Converting from a lanky WR to a burly TE has created unique advantages for Dulcich. He can line up all over the field and has the athleticism to succeed in nontraditional formations. Dulcich was incredibly lethal, lining up both in the slot and out-wide for UCLA. He slips across the line for an effortless dump-off catch on this play before darting for the first down. He looks incredibly fluid and natural, navigating his large frame all over the field.

Dulcich is not a prospect without flaws or limitations. Although he meets the desired height, his weight has fluctuated between 240 and 250 pounds this offseason. If he comes into camp on the lower end of that spectrum, he would be a bit slender for the TE position at the NFL level. He would also be susceptible to being overpowered by NFL defensive ends. Sustainable added mass would significantly improve his capabilities as a blocker. He has displayed the mentality to improve as a blocker but requires refinement in his technique as a run blocker and pass protection. Luckily, he has proved to be a sponge for absorbing new information and has tremendous drive.

Similar to several other young pass-catching prospects, Dulcich tends to lack body control and focus. This often leads to difficult catch adjustments and drops. He has also struggled against zone coverage at the collegiate level. Unable to create admirable separation, he is often forced into contested catches against this defensive scheme. It is respectable to believe that most of these flaws will be corrected over time with added experience. Dulcich is a raw prospect with a ton of potential but will probably not be drafted until the second or third day of the 2022 NFL Draft.

Greg Dulcich is a bit of a late-bloomer but has become one of the best TE prospects in the 2022 draft class. Although he is my TE2 in the class, ranked behind Trey McBride, he has the mentality and potential to finish at the top of the class. It is extremely rare for a TE prospect to make a fantasy impact in their first season. Dulcich has less hype surrounding him and will be drafted after McBride later this month. This could be a blessing in disguise for looming dynasty stakeholders. You can focus on other positions early in your rookie drafts before taking your chance on potentially the top TE in the class.

Landing spot will additionally be critical for the escalated success of the young TE at the next level. A raw prospect could greatly benefit from a team with a solid quarterback and veteran TE to mentor him. This was the required formula for the eventual breakout campaign he constructed at UCLA. It will take a significant amount of patience early on in his career, but Dulcich possesses all of the physical traits and potential we covet in TE prospects. He already crushed the TE vibe check, so now all that is left to do is sit back, relax, and ride the tasty wave into the sunset as he begins his next chapter.